Doesn’t matter, hasn’t stopped them from finishing the year at 9-3 and on their way back to Dallas for the Big 12 championship. I’m sure we’ll all be tuning in for the Raid bro Big 12 seminal in Morgantown later tonight. I’ve got my Schooner drag meme ready to go. 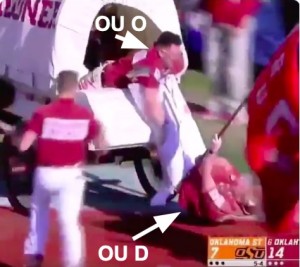 Pooka Williams and the Jayhawks certainly gave Texas a good fight, linebacker Joe Dineen in particular played a fantastic final game, but the Longhorns made the most of a strong third quarter to put them away despite the late game shenanigans on special teams.

You wouldn’t guess that from much of the commentary on this kid but he’s had a special year and could make a solid case for defensive MVP before coming up just short against Charles Omenihu. In four years, Boyd hasn’t missed a game, and in the fourth season he faced a murderer’s row of top receivers and regularly took them on in man coverage.

He shadowed Kansas’ star wideout Steven Sims on either side of the field this week and held him to 13 yards and five catches with a long on the day of six yards. If you add up the targets to Sims that went incomplete you would get something like one yard per attempt on the day.

Without Sims all Kansas could do was try to find leverage to run the ball with Pooka Williams, who had the full attention of Todd Orlando’s defense. On the day the Jayhawks managed only 296 yards of offense, domination by the Texas defense.

Add Steven Sims to Boyd’s list of victims on the year. He’s been matched up in man coverage on an island this year against Jalen Reagor, Oklahoma’s various wideouts, David Sills V, Hakeem Butler, and now Steven Sims Jr and come out smelling like a rose every week. If not for the bad game (week) against OSU I think this would be more obvious, still his resume stands up against any other cornerback in this league who’s tried to handle the tremendous stress that this conference puts on defensive backs. 18 pass break-ups for the senior now on the year.

No. 2: The run game opened up the offense

Sam Ehlinger missed a few throws in the first half that could have broken the game open but in the second half they got the run game going. Tre Watson had another great game with 14 carries for 79 yards while Keaontay Ingram added 13 carries for 51 yards. Ehlinger of course had a bullish TD run on a gutsy QB draw call on third and goal but they tried to minimize his carries save for mixing in some read plays. On all of Texas’ read plays the Jayhawks opted to defend the handoff.

They did a ton of damage with what I’ve been calling alt-power read and have been told is typically referred to as “power switch read.” 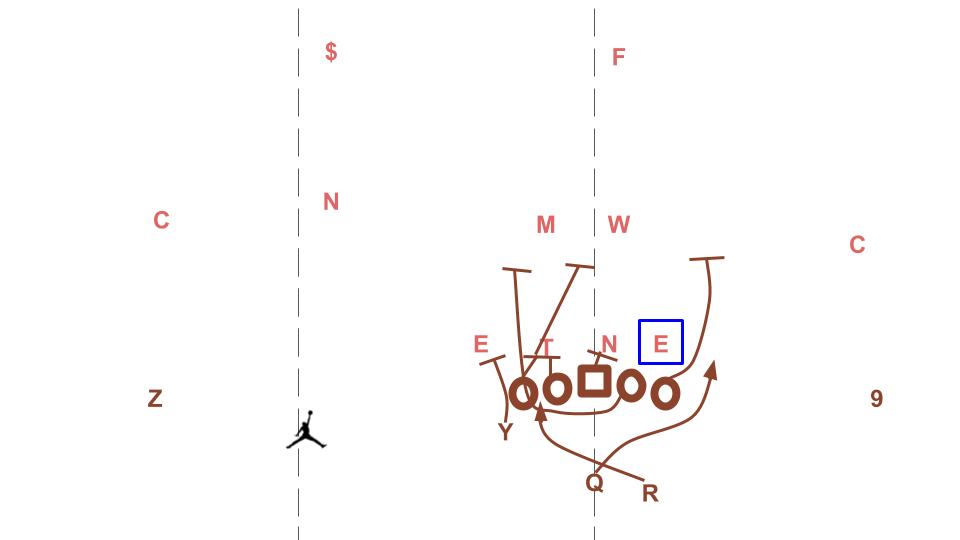 Kansas was playing to stop the QB keeper on the backside, and rightfully so because the numbers on that thing are pretty bad. But the hesitation it caused for the linebackers made for big problems play side where the double team and pulling guard were clearing out the first wave of Jayhawk defenders.

Watson’s 31-yard scamper came on this play and Kansas never really had a good answer for it. We’ll see it again next week, I imagine.

Once Texas was able to build some drives with the run game then that was basically it for Kansas, they couldn’t score enough to keep pace with even the rather lame effort that Texas produced.

Quick thought no. 3: One record ends, another in sight

Spectacular punts by Kansas, strong wind, and perhaps some shoulder discomfort was working against Sam Ehlinger and Texas early. He missed a number of throws that would have produced a 300-yard kind of day and a blowout victory, he also missed a LB bailing back in coverage from showing blitz that slipped under a Lil’Jordan Humphrey option route in the red zone to pick off a pass.

The Big 12 record for most passes thrown without an interception now stands at 308. Ehlinger didn’t wait very long to get another one out, this time I think because he was expecting an in route or a slant from Devin Duvernay and got something else. Kansas shifted their DBs hard and late and they all seem to have sticky fingers, with a turnover margin of +15 on the year that ranks third nationally. Remarkable that a team that’s so bad could be that good at something so important.

Anyways, Ehlinger has another record that he’s liable to break this season. Back in the 2005 season that many of y’all probably recall, Texas’ QB Vince Young scored 38 touchdowns during a special year that should have ended in a Heisman trophy. Well Sam Ehlinger is currently at 34 total touchdowns with (hopefully) two games for him left on the schedule. There’s a very good chance that 2018 will end with Ehlinger passing Vince for the second most touchdowns in a single season behind 2008 Colt McCoy.

What a special year and no stat better sums up why Texas has shocked so many and put themselves in position to win 10 games and a Big 12 championship for the first time this decade.

With Gary Johnson sitting on the bench, then Brandon Jones getting knocked out on a punt return, Texas had to utilize their depth to get into their nickel and dime packages against the Jayhawks. Shark McCulloch got the start at rover for Johnson and obviously had an impactful game both on the pass-rush and with that great coverage drop where he tipped a Peyton Bender pass to himself and returned it 65 yards to set up a Cameron Dicker FG.

Joseph Ossai got the start at B-backer and also played well, bringing heat on the edge throughout the game. He’s clearly going to be a highly impactful football player, probably assuming Charles Omenihu’s role as a part-time 4i and part-time edge rusher within the next year or two.

After Jones went out, B.J. Foster once again was called on to play some free safety for the second time this year and showed well. The Jayhawks aren’t just overpowered on offense but they have some things they do well and Sims and Pooka Williams are about as good as any other skill players in this conference. They couldn’t do much of anything against Texas on this day despite the Longhorns playing a lot of youth on the field.

You may have also noticed Anthony Cook playing down in the box like a rover and coming on a delayed blitz for a sack in the fourth quarter that forced the FG from Kansas to make it 24-17 rather than 24-21 (had they finished that drive with a TD). Pretty interesting deployment for the freshman, who’s certainly flashed some nice things this year particularly in terms of offering physical play.

Tonight Texas will learn which Air Raid team that broke 40 points on their defense (while yielding at least 40 on defense) will be lining up across from them in Jerry World.

There seems to be a consensus amongst folks that facing a beat-up West Virginia team that probably won’t pick on Anthony Wheeler in coverage nor run the ball so effectively again is preferable to facing Kyler Murray on turf. Of course on the other end, there’s not much left to Oklahoma’s defense at this point so Texas needn’t be overly afraid of the rematch with the Sooners.

Personally I think West Virginia will lean on the sights, smells, and sounds of Appalachia to finally overcome the Sooners at home. They have some team speed on defense with former Katy star Jovanni Stewart hanging around the box as a 5-9, 190 pound sam LB to make their 3-3-5 stack into a pseudo-dime. They’ve also played well in deep coverage, particularly at free safety with Kenny Robinson. They just need a few stops because I don’t think Oklahoma will get many with their own defense.

At any rate, Texas is rooting for a bloody shootout that wears both teams down to a nub and forces them to show anything and everything that could have been useful next weekend in the Big 12 title game.

Personally I’m looking forward to watching a Big 12 shootout with high stakes that doesn’t particularly impact any outcomes for the Longhorns.