Tom Herman and his staff are going to have a fun summer brainstorming workarounds to some glaring issues in their 2017 offense. Texas fans are no stranger to the concept of a unit featuring many great talents but lacking cohesiveness or identity that can elevate supporting players but this staff definitely is and they’ll be hard at work to find solutions this offseason.

So far they’ve found a number of strengths to build around, starting with left tackle Connor Williams and an interior OL that could be really special, particularly if Zach Shackelford stays healthy. Out wide they’ve found tons of guys that can play and they don’t all have overlapping skill sets either. Army Foreman and Collin Johnson are true receivers while Devin Duvernay and Jerrod Heard are explosive athletes that can kill you with the ball in their hand. There’s depth behind all four of them. With Shane Buechele back, Sam Ehlinger in the fold for spring, and the possibility of a grad transfer addition Texas has a guarantee of at least competent quarterback play this coming season.

But then there are the problem areas. The right side of the OL could be counted on to fail in key moments in 2016…

Whether Texas finds a truly reliable RT or not, this area could be buttressed somewhat by the use of a TE/H-back that could help out in protection or in run blocking to that side of the line but the team lacks a quality TE and is scrambling to even find someone who can reliably back up Andrew Beck.

Then there’s the question of who the main benefactor will be if Texas shores up the right side of the OL and is able to dominate the trenches in the run game. The two most talented backs on the roster are probably Chris Warren and Kirk Johnson and neither of them have had a healthy season yet as Longhorns.

Those are some big holes to fill but there are workarounds available to help Herman and his staff create an offensive identity in which players find roles that shore things up.

Here’s an example of a basic smashmouth spread concept that Herman and his staff would prefer to use as a foundational piece of the offense: 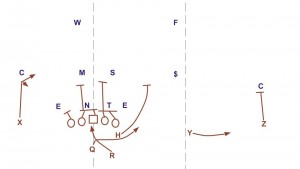 It’s a normal zone-read play with the TE arc releasing to lead block for the QB if he keeps it while the receivers run a bubble screen to one side and an adjustable route on the other. Herman refers to stuff like this as “the quadruple option” as there are four options here for the QB to make based on the alignment of the defense and how they play after the snap. 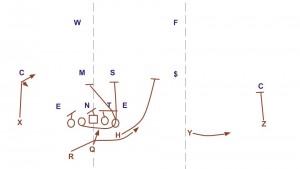 Similar deal with similar options and constraints for the QB to utilize.

Even if Chris Warren is injured and Andrew Beck or Kendall Moore (the Syracuse transfer) are struggling we’ll still likely see some of this from the 2017 Texas offense. It’s who Herman is and where he wants to take the team when and where he can.

However, this can all be supplemented with different formations and assignments if need be. What if it turns out that Texas has a better five-man skill player lineup on the field when they’re in a five WR set rather than 11 personnel (one RB, one TE)? What if the most terrifying thing Texas can do formationally and personnel wise is to get Jerrod Heard, Collin Johnson, Devin Duvernay, Armanti Foreman, and Dorian Leonard on the field at the same time?

Well Texas can still run inside zone, power, and the rest of the Herman run game at teams in that setting with just a few minor tweaks. For instance, inside zone: 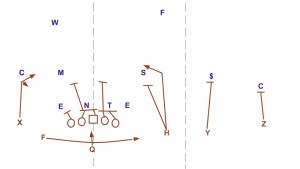 This would probably work best with the three-receiver side just blocking but Texas could attach run options if they liked. The sweeping WR represented here as “F” could be played by Duvernay or Heard and is essentially replacing the QB as the outside runner on the zone-read if the DE tries to stop the inside zone run. The QB is replacing the RB in this instance as the downhill, inside zone runner.

This is where things get tricky. Sam Ehlinger performed this very role regularly at Westlake and at 220, I don’t think anyone would be too worried about him holding up while doing this. Shane Buechele on the other hand would need to prove he’s up for the kinds of hits you can take executing schemes like this. Malik Zaire, were he to come, is perfectly built for this kind of tactic at 6-0, 225.

As far as quickness goes, I think Buechele would likely be more effective running this scheme than many might guess. Take this scramble against Oklahoma last year for instance…

The lateral quickness, vision, and willingness to run between the tackles is there for Buechele and that would all translate in this scheme. The only question is whether he would be able to power through arm tackles and fall forward or be ragdolled back behind the line of scrimmage. If Buechele is truly up to 205 with good weight added in his legs, I think it’s very reasonable that he could be effective here. After all, Baker Mayfield has been running stuff like this at OU the last few years at (allegedly) 6’1” 210.

The power-read play works even more easily since the RB is already on an outside sweep path in that scheme anyways, so asking that of a WR motioning across the formation is very natural. But again, you’re asking the QB to serve as the power scheme, downhill run option.

Outside zone is an even better fit as you can add the sweep as a backside constraint or simply have the QB handoff to a WR running the outside zone track while he reads the backside for pass or run options: 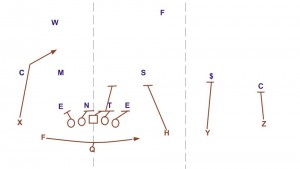 Lake Travis last season would also mix in double pass-options on either perimeter for Charlie Brewer to read with an inside, downhill run option if the defense covered them. If you have a QB that can run between the tackles a few times a game it opens up a wide world of possibilities for your squad.

Here’s one of many possibilities: 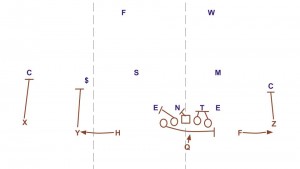 It’s a “dart” play of the sort that Baylor was living off when they had Spencer Drango at left tackle. The OL all block down at angles with a double team at the point of attack while the tackle pulls over and either leads or kicks out a DE based on the opposing front. If the tackle is good at executing that block, it’s a pretty devastating play for blowing holes open in the A and B gaps. If you combine it with bubble screens to Duvernay and Heard on either side of the formation you can put the linebackers in an impossible bind.

The goal here is just to be able to run the ball efficiently and consistently enough to force teams to shade their linebackers into the box or drop a safety down to play man coverage to take away your RB/TE-less run game. Once that happens then you can get to work in a set with five good WRs spread across the formation by picking matchups and going to town.

Throwing from the empty set

The five-WR set was a trump card back in the Colt McCoy days because they could execute it from their 10 personnel sets (featuring Chris Ogbonnaya as the RB) due to Ogbonnaya’s background at WR and mix tempo in. It was hard enough for opponents to keep Quan Cosby and Jordan Shipley covered up but when they also had to worry about James Kirkendoll, Brandon Collins, and Chris Ogbonnaya getting open while Colt was dancing around that was typically too much. Ohio State went down in the 2009 Fiesta Bowl blitzing that formation.

The empty passing set also happens to be a favorite tool of the Urban Meyer offense that Herman has adapted and is rich with tools for getting guys open. Some of the main pass game concepts of this offense we’ve gone over already but a particularly nasty empty set option hailing from Meyer and Ohio State is this sail/cab combo: 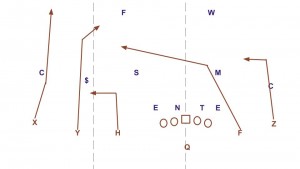 It’s an overload concept designed to apply a ton of stress vertically with easy checkdowns if everyone bails deep to guys on the move. No matter how a defense chooses to cover an empty set from Texas, someone is going to be left isolated on a Foreman, Johnson, Duvernay, etc.

Texas reaches its highest potential as an offense if they can leverage both their superiority in the trenches (save for that questionable RT spot) and their ability to overload the field with athletic receivers. If Buechele and the QBs prove up for it, the empty formation could serve as a way to do both even if Texas has problems at RB and TE. This will likely be a component of the 2017 offense, how large a role it has will depend on health and development across the roster from here till August.