For most teams in the Big 12 the safety position is one of the most difficult to get right.

Modern offenses are designed to get after them with the passing game and then go wild with the running game when they’re forced to back off and play prevent. With the styles of quarters-coverage common across the league, safeties that can cover a lot of range on the back end and stay on top of vertical routes while still offering the ability to come up and have a presence against the run game come at a premium.

Unlike most of these teams though, Charlie Strong’s defense doesn’t rely on quarters coverages and consequently has totally different requirements for the safety position in order for the scheme to work properly.

Texas should be working at an advantage here, but hasn’t been, and it’s worth examining why.

How teams have to fill out their safety spots

It’s essential for modern defenses to be able to put two or three good cover guys on the field. Without quick, coverage minded players to help handle each of the outside and slot receivers, defenses can get torched in a hurry by the offenses that take the field in the Big 12. Against some teams, defenses might even want to get four coverage-savvy DBs on the field to minimize the risk of matchup problems.

Teams have three interior safety-like positions to fill out and they’ll often determine their approach to locking down teams based on what they have here and the quality of their cornerbacks.

There’s the boundary safety, the field safety, and the nickel/space-backer. The space-backer who’s good on the edge is the easiest player to come by but protecting him requires using a safety behind him who can basically play man coverage on the slot.

The safety who can line up fairly deep but still be able to provide good coverage over the top or fill the alley and make a tackle is more rare and arguably more valuable.

The coverage safety who can be trusted to either drop down and cover a slot receiver or play deep off coverage in addition to occasionally offering support over the top for everyone else is the most rare and most teams don’t have this kind of player.

If Texas played the same kinds of quarters coverage as the rest of the league they’d be at an advantage in snatching up the kind of versatile athletes necessary to use multiple types of personnel. As it happens though, Texas doesn’t play that style. Instead, they use a true nickel corner to play what basically amounts to man coverage on the slot receiver, which frees up both safeties to avoid the kinds of challenging assignments that often chew up DBs across the league.

Profile of a good Texas safety

Because Texas leans on the nickel to handle the most dangerous inside receiver, it does create possibilities for the Longhorns to try and field physical, versatile athletes at either safety position.

Ideally each of those two safeties would be able to check off as “competent” but not necessarily “great” across a long list of assignments. Those assignments would include playing coverage on a slot or TE, replacing a linebacker in the box, forcing the edge, being an overlap player/free hitter in the box, blitzing the edge, playing a deep ½ field technique, and playing the deep middle.

For both safeties, being able to play coverage on an opponent’s 3rd or 4th best receiver from time to time, handling the deep coverage roles, and being worthy tacklers are non-negotiable. After that, you’d just want to be able to check off the remaining tasks between the two combined skill sets.

After all the bases are covered, the more overlap that exists between the two safeties, the more opportunities there are for disguise and flexibility that can confuse opponents and benefit everyone.

In handling those assignments, the most important traits are an ability to pursue the ball with leverage, tackle in space, and understand what’s happening in front of them. So long as the nickel is a good coverage player, the necessary range required isn’t quite as intense at these spots. These guys don’t really have to flip their hips and run with receivers much, the more valuable kind of athleticism is the ability to run downhill before being able to break down and tackle.

A great athlete is a plus in the Texas scheme, but finding hard-nosed guys that know how to find the football and master multiple assignments between the hash marks is much more likely to bring success than having the fastest safety tandem in the league.

This is a tricky balance to strike when you’re at the school that regularly aims to land the top athletes in the state.

Recruiting the safety position has gone poorly for Texas for some time now, and it has seemed that every year, save arguably for 2014, the Longhorn secondary has had major holes at safety that lowered the ceiling for the defense.

Here’s a peak at the last seven years of Texas’ starting safety tandems and recruiting:

Since 2010, Texas has recruited 11 blue-chip (four-star or higher) DBs that ended up at safety yet is looking at potentially starting a 3-star/walk-on combination for the third consecutive season and has had ZERO safeties named to either the 1st or 2nd All-Big 12 teams in the last six years. Texas hasn’t had a safety make the All-Big 12 team since Earl Thomas in 2009. 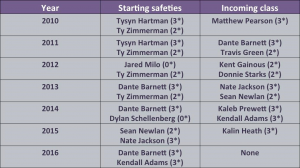 That’s zero blue-chip recruits and only 10 signed players on the roster which nevertheless yielded an All-Big 12 safety every single year from 2010 through 2014 with the streak finally breaking in 2015 primarily due to Dante Barnett missing the season with injury.

If you gave the Texas staff a chance to trade the prospective 2016 tandem of Dylan Haines and Jason Hall for Dante Barnett and Kendall Adams, I can assure you they’d take that trade in a heartbeat.

Glancing at the list of recruits you can see part of the reason Texas has flopped at the position. Sheroid Evans, Bryant Jackson, and Erik Huhn were debilitated by injuries and unable to make an impact (though Evans has a chance to finally play in 2016). Chevoski Collins, Leroy Scott, and Josh Turner had off field issues that prevented them from making good on their athletic potential.

Adrian Colbert and Kevin Vaccaro were simply misses that were unable to climb the depth chart. Adrian Phillips and Mykkele Thompson made good, particularly in their senior campaigns, although Thompson spent most of his senior year playing corner or nickel. The jury is still out on Jason Hall, John Bonney, DeShon Elliott, P.J. Locke (probably will stay at nickel), Eric Cuffee (also may not play safety), Brandon Jones, and Chris Brown.

It would seem from comparison between Texas and K-State (or most other Big 12 schools) that the “quarterback of the defense” can be as tricky to evaluate as the real quarterback position. The vision, mental processing speed, physical toughness, and level of athleticism needed to thrive at safety in the Big 12 is probably best uncovered through a more strenuous evaluation process than just snatching up the most athletic 200-pounders in the state every year.

Clearly finding kids that can handle the mental challenge and then properly developing them is the real key, just like with the quarterback position where Texas has similarly wandered in the wilderness despite a revolving door of top-rated athletes.

It’ll be very interesting to track how incoming 5-star and the nation’s top rated safety, Brandon Jones, and Chris Brown handle the cerebral aspects of the position. Texas hasn’t lacked for great athletes here (though they’ve had few as good as Jones) but they have lacked players with a good feel for the position and how to navigate the space and assignments. When that problem is solved and Texas is putting safeties on the All-Big 12 teams again, then we’ll really see dominant defense in Austin again.

RECRUITING: 2023 OL offered
PORTAL: Byron Vaughns
EGAT: You’re so money and you don’t even hire like it
BOYD: Who won the Big 12 in Week 6?