One of the big changes that Mack Brown brought to the recruiting game was snatching up juniors early after the season ended before they were even seniors. That required some projection on the part of the Texas staff, but projection is already the name of the game and they could at least work off a year of varsity film plus camp work to get a sense of what a kid might become at Texas.

Quarterbacks were often the first to commit before they’d lead the way in building out the rest of the class, essentially taking on an early role as team leaders. But then escalation occurred and now we’re watching QBs commit after sophomore seasons, including guys like Sam Ehlinger of Westlake and now Roschon Johnson from Port Neches-Groves.

In these instances we’re still seeing coaches make projections off a year of playing varsity plus a glimpse into what the offseason looks like, but that’s venturing pretty far into prognostication world. Here’s what recruiters were looking at in terms of pure statistical production from Ehlinger and Johnson after their sophomore years: 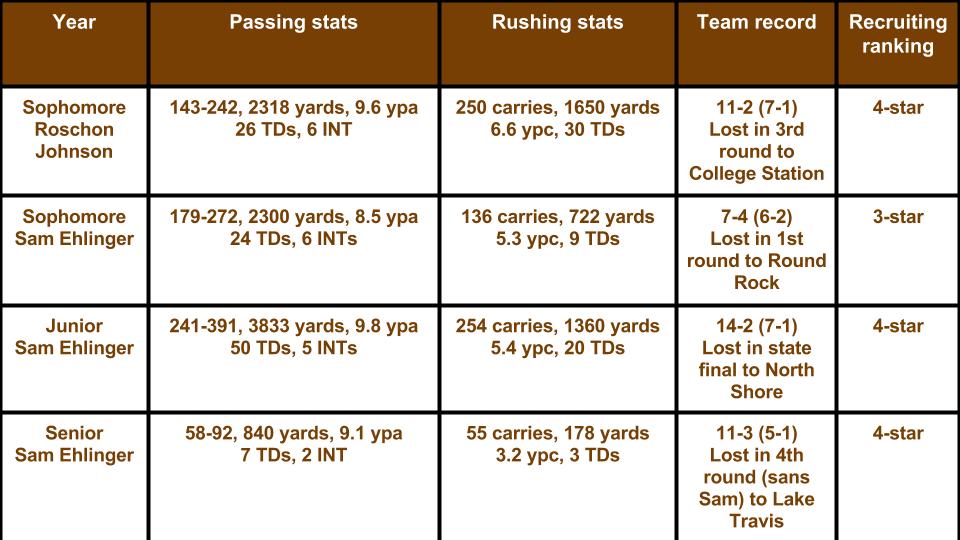 Ehlinger made a huge leap from his sophomore to junior season, which earned him an additional star from recruiting services and led to this amusing exchange on Twitter:

You can delete but you can’t hide pic.twitter.com/AdRvG4sYbk

The Ehlinger sophomore film showed the same player that exploded as a junior, a kid with poise in the pocket, nice touch on deep throws, and clear delight in running downhill on inside runs.

The main difference from his sophomore year to his junior year was opportunity. In 2014 Ehlinger only played in five games whereas he started every game of his junior season and came within a botched field goal of winning the state title. Obviously he’s developed in a dozen different ways since then, and will continue to do so, but much of who Ehlinger is as a player today was already baked into the cake when he was a sophomore. So what does Roschon Johnson’s sophomore film tell us about him?

When I watch Johnson’s sophomore highlights, I see an exceptionally dynamic runner who’s capable of pushing the ball down the field if he can set his feet and who can throw on the move. The Greg Ward Jr. comparisons seem fairly apt even though he’s already much bigger than the Houston star.

With Texas QB recruits I like to go much deeper if I can and study full games to see how his team gameplans, how opponents gameplan to stop them, and how the QB handles all of that over the course of a game. You don’t necessarily see third and five in a crucial fourth quarter drive on highlights unless it goes particularly well but those situations tell you a lot about who a quarterback really is.

I was able to break down Roschon’s games against Vidor and Port Arthur Memorial, the former of which was a pretty commanding 41-22 victory while the latter was the reverse and a 33-28 defeat.

The Vidor Pirates were pretty much overmatched against Port Neches-Groves. They brought an old school, veer-option run game in and tried to grind out a win with “three yards and a cloud of dust.” Their defense was a solid, 4-2-5 quarters unit that tried to control PN-G’s offense by using the sam linebacker pretty aggressively on the edge to contain the ball and keep either Johnson or RB Preston Hughes from getting into space.

For instance, here was their alignment against a trips set: 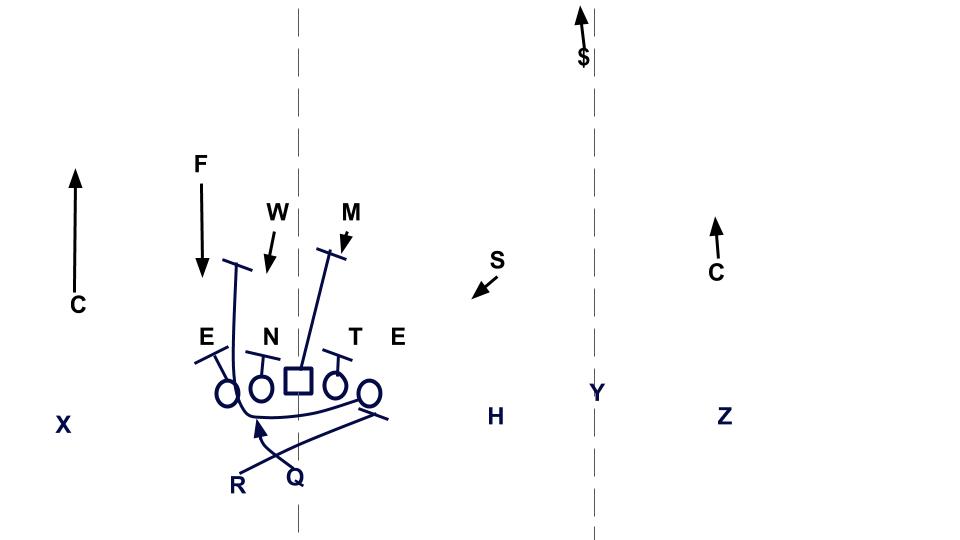 Vidor was using the sam/nickel and the field corner to try and take away all the quick routes to the three receiver side while keeping the sam as close to the action as possible to help against the run game. Meanwhile on the other edge they were dropping the free safety down to be another extra man against the run. On this “QB dart” run, the Indians use their RB as a blocker and misdirection tool to try and spring Roschon into space but they can’t account for the free safety in the box.

In college the solution for something like this is to fire some different passing patterns to the trips side and punish a team for loading the box so aggressively with quick throws. Mastering quick game reads, dropbacks, timing, and protection is lot for a high school offense and it’s clear that PN-G preferred to handle these kinds of tactics with a diverse run game or with deep shots to beat that coverage deep:

Roschon was effective on this stuff, he knew where to find opportunities and if he had a clean enough pocket to set his feet he could hit his receivers in stride. However he wasn’t being asked to read through progressions very often or to hit throws outside the hash marks unless he was rolling out. There simply wasn’t much need when this was always an option:

Same coverage from the defense but the free safety initially starts towards the line, sees pass protection, and tries to drop back only to leave the boundary vulnerable to this brilliant scramble. If that guy is Jordan Sterns or Nick Orr, playing with better discipline and eye control and bringing greater change of direction to the equation, then this play isn’t quite as damaging. But against high school defenders Roschon is nearly unstoppable just by being the feature of a well-designed rushing attack.

When the going gets tough…

You get a better sense of what Roschon will see from his future opponents in his game against Port Arthur Memorial. The Titans are a pipeline for D1 talent and their 2016 roster beat everyone on the schedule except Vidor (ha!) and Temple in the third round of the playoffs. They had a DL that went 6-0, 265 (Kainen Collins), 6-4, 285 (Leonta Trevon Dancy), and 6-2, 270 (Dajuan McMillan). They also had a fellow named Kary Vincent Jr. out at cornerback shadowing PN-G’s top receiver and probably some other big time athletes I didn’t recognize or notice.

Vincent picked RJ early and essentially eliminated favorite target Keynel McZeal from the game while the big Memorial DL stuffed a lot of interior runs when PN-G couldn’t win the line of scrimmage. However, RJ did show some nice things making quick reads and throws to the perimeter: 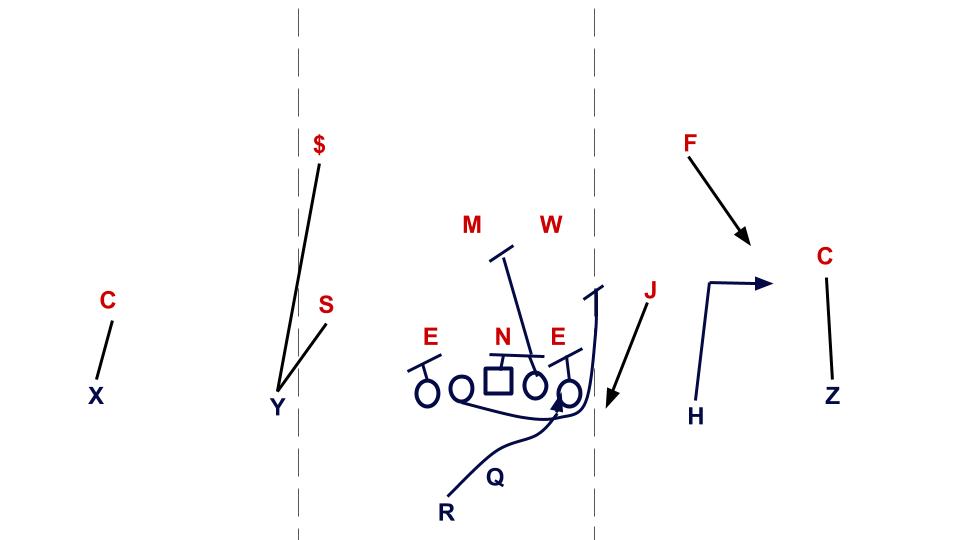 Port Arthur is showing the possibilities of modern quarters defense from a 3-4 alignment here, playing Vincent in man coverage on the left, bracketing the field slot with the sam linebacker and strong safety, and then playing pure man coverage on the back end so they can send the jack linebacker (or B-backer in Texas parlance) unblocked off the edge. Roschon makes the quick read and hits his slot in the flat with enough timing and accuracy to set him up for a big gain after the catch.

That play aside, PN-G lacked the means to overcome Memorial’s superior talent with their normal assortment of deep passes and run game concepts. When they made a late run down 33-14 in the fourth quarter they managed it with a combination of QB run game, some plays that finally sprung their shifty RB, and then some Roschon improvisations.

A QB run that they found was pretty rough on the Memorial run defense was this pin and pull concept that avoided the interior DL while using the running back as an extra blocker at the point of attack: 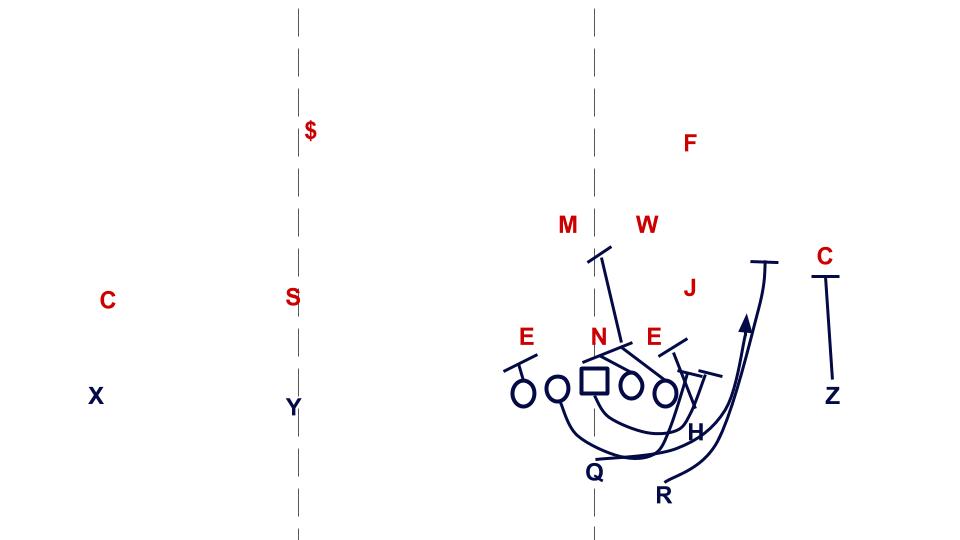 The pulling center and left guard don’t really hit their intended targets, but they at least manage to protect RJ’s angle to hit the edge and then his incredible ability to cut explosively up field proves enough to beat the safety and middle linebacker that his blockers couldn’t reach. They scored two late touchdowns on that concept and both of them looked more or less like that. This one (the latter of the two) was set up by another play that should put many Texas fans into “reminisce mode” about signal callers from a previous decade.

It’s hard to convert third and 17 with your feet unless you’re using them to buy time and conflict defenders in order to fling the ball down the field, then it becomes almost the only way to do it. Plays like this show a certain poise and confidence from Roschon Johnson that set him apart from most high school quarterbacks. The arm strength is not amazing, although there’s a good chance it improves by the time he’d be donning burnt orange, but you do see an awareness and ability to put the ball in the right spot to break down a defense which is the most essential skill for a college quarterback.

Johnson’s running ability necessarily decreases the difficulty of throws necessary to break down an opposing defense, as you can see from watching opponents of yesteryear attempting to get enough big run defenders near the box to stop Texas’ dual-threat quarterbacks of yesteryear from getting loose in space:

It’s usually easy to get excited about the dynamic, dual-threat high school quarterback only to be deflated when he lacks the poise or accuracy to actually make good when opposing defenses require that he throw the ball with consistency to beat them. Tyrone Swoopes was never consistent and Jerrod Heard looked visibly rattled on the rare occasions that opponents could force him to use his arm rather than his legs. Johnson isn’t a dominant passer but he does look more confident in that dimension of his play and more assertive about growing in that realm than those previous two dual-threats.

We’re about to see a junior year from Roschon that will reveal how far along his footwork in the passing game has come and will also likely reveal an even more powerful running threat than we saw a year ago. Don’t be shocked if that film reveals a pretty exciting player that explains Tom Herman’s willingness to take the commitment of a 16-year old, the signs are there to be seen from the sophomore film.

EVERYONE GETS A TROPHY: College Football is Coming Back
Andrew Jones named Big 12 Male Sportsperson of the Year
BIG 12: Statement from Chris Del Conte on return to activity guidelines
RECRUITING: 2022 WR from Virginia offered