Football is a violent game, and violent men often dominate its outcomes, but the quarterback is typically an exception.

The modern game has become increasingly about finding QBs that can think quickly and rationally while chaos and bloodshed reigns all around them. For this position success is less about being effective at direct violence and more about being fearless in the face of it.

Much of the recruiting media started to figure out that Ehlinger is pretty special after he led Westlake to a 14-2 season and came within the successful conversion of a 27-yard FG of winning the 6A D1 state championship. Ehlinger was bumped up the rankings and labeled accurately as a “dual threat” QB, but there’s still a lot about him that’s missed and much of it can be summed up as “fearlessness.”

His fortitude is the defining trait that unifies a diverse set of skills and makes Ehlinger as a total player one of the best QB recruits Texas has seen in quite some time.

Let’s start by looking at his statistical profile from high school:

Obviously Sam was the foundation for the entire Westlake offense. He accounted for 5,193 total yards in his junior season along with 70 touchdowns and everything the Chaparrals were trying to do on offense centered on his unique blend of skills.

Fearlessness in the running game

Maybe the most misunderstood element of Ehlinger’s game is who he is as a runner and what it means for an overall offensive concept. GP North Shore 4-star junior pass rusher, K’Lavon Chaisson, told Eric and Justin at the Opening Regionals in Houston that Ehlinger was one of the most competitive players he’d ever faced and a guy that no one was excited to tackle.

Just a reminder, we’re talking about a QB here.

As a runner, Ehlinger is at his best cutting upfield and lowering his shoulder. The Chaparrals ran a few varieties of inside zone and power to feature his ability to plant and make gains running between the tackles, perhaps their best way to do this was with their version of power read:

You’ll notice that Ehlinger has a ton of space to work in initially, but also that at the end of the run he’s facing LSU 5-star commit, Eric Monroe, filling the alley and Ehlinger just lowers his helmet and runs him over.

Here’s how the play works on the chalkboard: 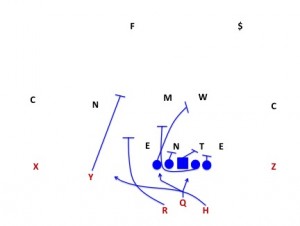 Ehlinger is reading the DE first, if he gets wide to stop the sweep then he’s pulling the ball and running downhill. Sam also has the vision and lateral agility to read the backside linebacker and he’d hit the cutback lane if the defense left it open. In this instance the weakside linebacker stayed home rather than overlapping to help stop the play at the point of attack, so Ehlinger followed his lead blockers to paydirt.

This was an easy gain, but it was an easy gain that Ehlinger often saw last year when defenses would try to line up in typical, honest defenses in order to stop the pass rather than cheating numbers into the box.

What makes Ehlinger’s running ability so special despite a lack of breakaway speed is that it allows Westlake to use QB run-game concepts that are impossible to defend without using extra defenders and weakening the pass defense. As we’ll get to in a moment, Ehlinger’s abilities in the passing game are what make him elite, so using extra numbers to stop the run is not an appealing option.

Even better, as a runner Ehlinger is basically a fullback. If he didn’t have a fantastic arm, elite pocket presence, and accuracy throwing the football, I think he could still probably earn a D1 scholarship as a fullback prospect. He’s likely to be 220+ early in his college career, after all.

As you’ll have noted by now, the power-read play is a staple in the veer and shoot offense and it’s also not hard for the system to utilize a QB that can take the edge or run between the tackles on zone like Sam does at Westlake.There are many who think that the Chaps are running Ehlinger too much but these takes ignore that A) he’s a punishing runner, B) his contributions on the ground actually make Westlake a schematic nightmare, and C) the Texas coaches would be wise to continue to use Ehlinger as a fullback type runner because it’s useful and he’s excellent at it.

Todd Dodge’s Westlake offense is basically an Air Raid system with a major emphasis on the dropback, spread passing game. That underlying structure is part of what makes the Ehlinger downhill running game such a potent fit within the greater offense as Air Raid teams often struggle to develop a competent rushing attack.

It also allows the Chaps to emphasize the passing game in their choices at the RB position and play the guys that can run routes and pass protect rather than the best runner. It’s rare to find a high school offense that is as effective in as many different concepts as Westlake and this is due largely to having a fullback/QB who can handle getting 15 carries while also standing in the pocket to throw strikes downfield over and over again.

It was a similar versatility that made Tim Tebow so devastating in the Urban Meyer Gators offense, but Ehlinger is a much better passing prospect than Tebow.

Fearlessness in the passing game

The ability to calmly and quickly process info in the midst of violent chaos before delivering an accurate ball is one of the single most valuable skills in the game and often a major reason that highly touted prospects don’t make it at the higher levels.

Not only is Ehlinger particularly good in the sorts of off-schedule plays that often make college QBs, but he’s uniquely excellent at executing in the pocket. He’s clearly more afraid of failing to make a play than taking it on the chin. If he gets lit up, he’ll just get payback the next time Dodge signals in for a power run.

Here’s another example in the state title game, one of many from that game and from Ehlinger’s season, in which he hung around in the pocket in order to throw the ball that would have guaranteed victory had Westlake had a better kicker.

This is one of the Chaps favorite passing schemes right now, the “levels” concept that in this instance they ran as a two-man combo to the boundary: 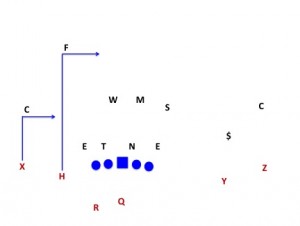 As I’ve noted before, Texas hasn’t had a QB that can consistently nail the dig route in quite some time. It requires the ability to see the field clearly enough to avoid all of the defenders that can impact a throw over the middle (reaching DL, dropping LBs, and of course the safeties and nickel), accuracy to beat all the congestion that can come up in the middle, and the willingness to throw from the pocket which often involves taking shots like Sam did here.

Westlake went 14-2 last year in part because they presented such an incredible dilemma to opposing defenses. Defending their Air Raid passing attack required playing coverage but stopping the run game meant getting extra numbers in the box.

GP North Shore’s solution was to rely on its exceptional athleticism on defense to play a lot of press coverage. And either what often amounted to a single deep safety coverage or a zero safety coverage, they’d blitz, a ton.

The surest way to beat press coverage is with deep kill shots that put points on the board, but Westlake struggled to beat the North Shore DBs consistently enough to get points from that approach. As solid as the Chaps’ protection was, they also struggled to hold up from all the pressure.

Ehlinger had to make some extraordinary scrambles just to escape the North Shore pressure, but he also made some throws on the run that nearly brought victory for the Chaps. Here’s the one that set Westlake up on the goal line with a chance to force a second overtime:

It’s hard to tell from this frame but this looks like a Michigan State-style 3-deep/2-under zone blitz of the kind that has brought ruin to so many Big 10 QBs. North Shore gets a free rusher and wide contain players, so the original play design for the Chaps is basically cooked and Ehlinger’s in trouble in terms of even getting out of this without giving up a huge loss. Nevertheless, he manages to break free of a tackle and elude others with his powerful, darting steps and get wide before firing a strike down the sideline to a receiver that has slipped open on a comeback.

This is the kind of off-schedule play making that sets apart QBs and can be such a reliable formula for success at the college level. If you have a QB that can always buy time and throw from the run combined with receivers that know how to get open in moments like this, you can ruin defenses with passing down play making and win a lot of games.

“Fear nothing that bleeds”

The Instagram post from Ehlinger with that quote captioning a shot of him staring down an opposing player on the field perfectly encapsulates who he is as a player and what Texas is bringing to the 40 Acres in the Spring of 2017.

The kid is simply unafraid out on the field and plays with a sort of reckless abandon either in the run game or the passing game that makes him impervious to the kinds of tactics that are typically used to throw off QBs. He thrives in Westlake’s passing game, which is more sophisticated than anything Texas has successfully utilized in the last several years, but he’s also solved their classic Air Raid squad dilemma of how to get punch in the box with his hard running.

Good offensive coaches always adapt their system to their players, particularly the QB, but Ehlinger is the kind of leader and versatile prospect that you build your system around. His fearless leadership on the field can’t arrive to Texas soon enough.

RECRUITING: 2023 OL offered
PORTAL: Byron Vaughns
EGAT: You’re so money and you don’t even hire like it
BOYD: Who won the Big 12 in Week 6?