There’s not been a great deal written about Jeff Traylor yet on the Longhorn interwebs but he’s actually quite a fascinating character that could play a big role in helping Strong shape the Texas program.

Before being plucked from high school, the Gilmer head coach was on track to becoming the winningest coach in East Texas history and was coming off a 4A state championship where he rode the Boyd brothers and Baylor commit Blake Lynch to an undefeated season and victories over powerhouses such as Gladewater, Celina, and West-Orange Stark.

That was his 3rd state title at the school in a run of success that has included two other titles, some other finals appearances, and several district championships.

He’s been brought aboard to coach tight ends, special teams, and recruit the East Texas and DFW area where he’s made his name.

For Traylor this could be a move like the one that took Art Briles to Lubbock in 2000 to serve as a RB coach for Mike Leach and acclimate himself to the college game before taking over Houston in 2003, Baylor in 2008, the Big 12 in 2013, and perhaps the world in 2020. If it doesn’t work out, it’s easy to see Traylor managing a soft landing back at Gilmer.

In the meantime what does Traylor bring to Strong’s Longhorns?

The curious thing about Traylor being hired as Texas’ new tight ends coach is that Gilmer’s offense didn’t even use tight ends save for in short-yardage situations or for their Wildcat formation which they used as a 4th phase unit.

For those counting, Texas now has a TE coach and OL coach with backgrounds in the “spread to run” school of offense working under an offensive coordinator who likes to use tight ends and motion to create leverage, move around defenses, and run the football like a pro-style system.

For Wickline at Oklahoma State and Traylor at Gilmer, if an opposing team brought extra numbers to stop the run, the answer was to throw it. They aren’t familiar with Watson’s world of “y-exchange” tactics as Wickline’s run game demonstrated against TCU when they’re H-back motions only succeeded in setting up weak safety Derrick Kindred to make tackles behind the line of scrimmage.

Traylor did make use of the fullback position, often running Spread-I formation schemes that combined a spread passing game with 2-back, lead runs that could help account for extra numbers in the box. When he utilized a tight end, it was generally in the Wildcat set where he used an unbalanced line and mostly ran power: 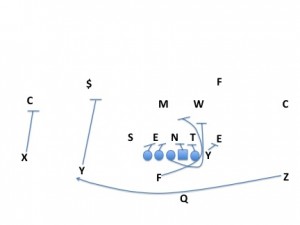 The tight end here is only looking to stay inside of the force player and clear space for the pulling guard and fullback so they can reach the linebackers and do the yeoman’s work of the scheme.

So the Longhorns haven’t exactly pulled in someone with Traylor who’s known for how to better involve the tight ends in the running game, or how to develop NFL prospects at the position.

Strong must be hoping that Traylor’s considerable overall skills as a coach will translate to being able to see out Watson and/or Wickline’s vision for how tight ends will be used in the offense.

On the special teams side, Traylor has experience coaching that unit and oversaw good special teams play from his Gilmer squads. In addition to being a good overseer of a unit and program, he actually has some special teams’ acumen.

It’s worth noting though that teams often don’t grab guys known for teaching their position as tight end coaches, as Bruce Chambers long tenure at Texas clearly reveals, and Strong probably views the main value-add with Traylor as building connections with HS coaches within the state and improving evaluations and recruiting in the key East Texas region.

Strong’s overall strategy for winning football games can largely be summed up as recruiting athletic black kids from tough backgrounds and harnessing their speed and aggression in simple yet efficient schemes.

For most of his career, he’s relied on South Florida for providing these types of players and the Louisville defense he left for Bobby Petrino had more Floridians on the field than Florida State’s offense had when the two teams met in 2014.

Strong is obviously continuing to rely on his deep connections to that region but he’ll have to load up with Texans to have long-lasting success in Austin. The question then becomes, where in Texas can he find athletes that are hungry to use football as a vehicle to improve their lives?

This region has provided elite athletes to every major program in the region at some point in its history. Whichever program is on top in a given period of time is often the one that’s doing the best job of recruiting East Texas.

The problem has been that Chambers was a worthless recruiter and A&M is currently dominating the region. Strong needs to get a firmer grip to ensure that the Boyds are not the only #bEASTtexas athletes that Charlie is able to bring to Austin while remaking the roster in his own image.

When it comes to both knowing current East Texas players as well as having connections that will allow successful exploration, evaluation, and recruiting of future stars, Traylor is a major add for the Longhorns.

He has a reputation for getting a lot out of his players and years of relating to high school students as a head coach combined with the obvious ambition that led him to take the Texas job would lead you to believe that he’s probably going to work hard to recruit the area effectively for the Longhorns.

Traylor’s ambitions come from the fact that Texas HS spread coaches are killing it around the nation right now. Chip Kelly has brought the spread to the NFL and won double digit games in back-to-back seasons with quarterbacks no one else wanted while Chad Morris and Briles are part of a wave of HS offensive coaches running major regional programs. There’s an increasing demand in the college coach job market for coaches of Traylors’ background that he could capitalize on if he can prove himself at the college level.

So what does he have to offer in the realm of spread offense tactics?

Traylor’s strategy on offense at Gilmer was very closely akin to Strong’s strategy on defense. Get great athletes, give them simple assignments, and put them in spaces where their athleticism can dominate.

Gilmer was a true spread team in 2014 that, ironically, went to a fullback rather than a tight end and used the spread-I formation when they needed to mix things up with the run-game from the base offense. The results were remarkable.

Quarterback McLane Carter was a worthy high school starter but the kid was hardly a D-1 talent and yet threw for 3969 yards with 47 touchdowns and two interceptions. How? Because Traylor manufactured easy ways for him to throw the ball to targets that included Kris Boyd and Blake Lynch.

How? By utilizing play-action, some RPOs, and four/five receiver formations that made reads clear and simple. How did they run the ball from these sets when Carter himself was not a running threat?

Through the use of motion, fullbacks, and RPO schemes that kept the ball away from the defense’s extra defender without asking the quarterback to carry it. Their favorite play was to run outside zone to Kris Boyd with a lead blocker: 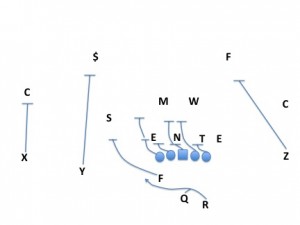 With this style of outside zone blocking, which you can find over and over again on Kris Boyd’s highlight tape, the offensive line is first looking to create a horizontally shifting wall that prevents penetration and is only tangentially interested in actually engaging with the DL. After the DL has been flanked, the OL are advancing to the next level to block a linebacker while Boyd is using his athleticism to either win the edge or pick his way through the resulting creases in the cutback lane.

That Gilmer’s OL were good at staying in front of DL and their ability to move in space was useful for all of their excellent screens which were a highly effective way for Traylor to both constrain defenses as well as set up their killer athletes on the perimeter to catch the ball in space.

Perhaps the best part of the Gilmer offense was the way they’d mix in gap schemes, the nastiest of which was a counter/trap play that could attack the opposite side from outside zone from the same formation: 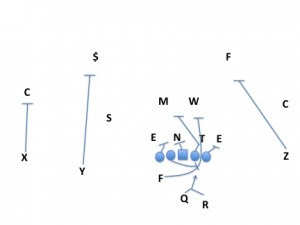 The guard looks to give a quick check to the defensive tackle before blocking down on the backside linebacker. That tackle then tries to get upfield only to be trapped by the pulling guard while the fullback leads inside against the playside linebacker. You don’t see a great deal of this style of blocking in the Big 12 but Michigan State used it to run for 238 yards against Baylor in the Cotton Bowl and the Bears were unused to the style.

The difference is that Traylor runs these types of old school gap schemes from spread formations.

Finally there’s the Wildcat and QB run-game, where Traylor continued to combine zone and gap schemes in a way that emulates what Kansas State has done in the Bill Snyder era. Blake Lynch got 72 carries in this offense and ran for 888 yards and 19 touchdowns, good for 12.3 yards per carry.

All of this offensive wizardry may be where Traylor’s greatest value lies for Charlie’s program. He’s arguably the best coach on the staff at putting athletes like Jerrod Heard, Kai Locksley, Tyrone Swoopes, or Daje Johnson in simple schemes where they could wreak havoc. All he needs is a good spread OL, a fullback, and some versatile athletes and he’ll get them opportunities in space, which is something Texas struggled to do in 2014.

Texas hired a great coach with Jeff Traylor, although he’s a strange fit for what Texas has been attempting to do on offense. If he’s freed up to teach Texas’ tight ends to block as fullback/H-backs, improves the quality of Texas’ special teams, and wins back some ground recruiting in East Texas against A&M, then Charlie will have made a special hire and the college coaching world may have added a future star from the state’s high school ranks.