AUSTIN — Tom Herman searched across the country for a true inside linebacker for his 2018 class. He went to St. Louis to find one, and today he got the good news.

Excerpt from the Recruiting Notebook:

How he fits at Texas: Adeoye is a “Mac” linebacker all the way, a stocky plugger who thrives at finding the ball between the tackles. He’s a solid athlete, especially at 6-foot-2, 220, but he’s most explosive generating force in a few steps coming downhill and not chasing the ball. He looks good and savvy about scraping into gaps and then his downhill power does the work of stopping the ball and bringing people down. He’s also a solid blitzer with the ability to fight through or evade the wash. Adeoye is a great fit for the run defense that Orlando was employing at Houston that mixed downhill fills with scrapes and blitzes in the box and has a high enough floor that he should help Texas be able to safely integrate and develop raw, position-changing athletes with the other LB scholarships. – IB

WHAT AYODELE ADEOYE MEANS TO TEXAS from Eric Nahlin

Good ILB’s are becoming increasingly hard to find, at least in Texas. A quick look at recent quality talents tells the tale.

2014 had Hoza Scott, and he was as good of a natural talent as I’ll ever see, but he had issues off the field.

2015 had Anthony Wheeler who may or may not be better suited to a more OLB role. I thought he displayed fine ILB traits as a high school senior, however. There was also Breckyn Hager in that class, but he was always an edge player to me.

Texas nearly landed inside thumper Dontavious Jackson in 2016, but he chose Florida State and showed promise as a freshman. There was also Demarco Boyd in that class, but I viewed him as a fullback.

The premium on Anthony Hines in 2017 was so high because he was so rare; a big, ILB, with OLB athleticism and range. Plus no baggage. Baron Browning could also be included here because he can play about four positions. 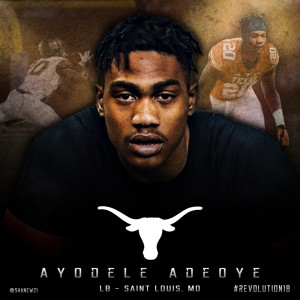 2018 has even fewer options than previous years (though I like Chad Bailey), hence Texas looked out-of-state and found Adeoye.

Because of the dearth of true ILB’s, Texas has been forced to go the square-peg-round-hole route with high school edge players with great athleticism and size. This would be Malik Jefferson, Jeffrey McCulloch, the recently removed from the team (school has yet to confirm), Erick Fowler, and in the class of 2017, Marqez Bimage.

Moving high school edge players hasn’t gone all that well for Texas, as ILB play has been far too inconsistent. It’s a difficult transition to make and it requires great teaching and a suitable scheme; both of which were MIA the last two seasons.

(An aside: I expect much more consistent play this year from the linebackers, and have less concern over the position as a whole than others.)

Where as some of the previous signees required some projection (i.e. guesswork), Adeoye comes with a much cleaner outlook at the position. Watching his tape it’s easy to see him understanding and doing ILB things: he attacks and stacks blockers; he takes a direct path to the ball; he has good closing speed; he’s physical and violent with prototypical size.

Compounding the importance of the Show Me State product is the roster turnover guaranteed at the position by the time he’s in his second year.
It was paramount Texas got a quality inside option in this class to groom ahead of the departure of the class of 2015.

Yet another box checked on Herman’s list of needs.