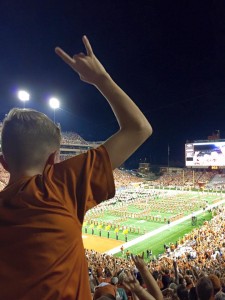 We walked through the dark and around the graveyard, where I always park when I’m going to a Texas game in Austin. I have kids, so I’m cheap, and parking next to the graves across the highway is free.

My son Miles, who was 12 then, knows the routine. We park near where I used to tell him all of UT’s evil, vanquished opponents lie permanently, as dead as common sense, and we trudge across I-35 to the stadium. When we cross over the highway – near the Disch – I always act like I’m going to push him down into the traffic below, because that’s what fathers do.

When the game is over, we are always drained, and the walk back to the car seems a lot longer.

After this particular game, the 2015 Jerrod Heard California loss, we were especially drained. I don’t have season tickets, so I usually end up getting tickets others don’t want. Those games usually hold no drama on the field, but we have a blast nonetheless.

The California game was different for us; it was the first Texas game with real drama we had ever attended together. We loved watching the late-in-the-first half surge, and had a feeling the second half would have some magic.

Usually around the third quarter, Miles starts contemplating the concession stand. This time, though, we rode the football roller coaster on every snap. We yelled and hugged and high-fived and spent the second half standing up, marveling at Heard in the open field. We signaled “touchdown” a lot and booed the refs like hell, and late in the game, we were doing math in our heads. We needed a touchdown and an extra point to tie the game, and the clock was under two minutes.

We couldn’t speak, because speaking at that point was pointless. Too much noise. So we yelled, you know, the kind of yell you use where you kind of lean over to the person next to you without taking your eyes from the field.

I leaned toward Miles.

“When we score a touchdown here,” I shouted, knowing full well we were going to score, “we’ve got to go for two! Let’s win it right now!”

Soon, we saw Heard break free, and he was running toward us. He was literally running right toward us! We were shouting, but not anything in particular. Jumping up and down and hugging and beating each other’s backs while Charlie Strong summoned his kicker.

Our seats were above the northwest corner of the end zone, so we didn’t have a good angle on the extra point. Miles was watching the field; I watched Godzilla. As soon as the kick was struck, Miles assumed overtime awaited and had his hands in the air. I didn’t lean this time, I just said, “He missed it.” Miles dropped his head and his arms. Dammit.

So, we began our trudge back toward the graveyard again, replaying the last moments of the game over and over again. I asked a stranger at the light near the Erwin Center before crossing the highway: “We’ve got to go for it there, don’t we?” He said, “Got to.” Dammit.

I remember this particular walk, because the game had been three hours of work and joy, and we had shared it together, totally immersed, much like I had shared so many games with my own dad 40+ years ago at Shotwell Stadium in Abilene, sitting in section W5 and always getting to the game early enough to watch the teams warm up. Texas had lost, but I was filled up.

I remember our walk now also because this week, my son and I are going to our first Texas-OU game together. We’re going up early Saturday, and parking at a bar my friend owns in south Dallas. From there, we will catch an Uber to the State Fair. We’ll grab a Fletcher’s corn dog and expand our vocabularies when the buses roll in, though at 14, Miles probably has heard more in his school cafeteria than he will at the top of the Cotton Bowl tunnel.

Some might say yelling “OU sucks!” in front of your kid is bad parenting; personally, I think honesty is the best trait a father can show. The sun sets in the west with a burnt orange glow, I’ll always love you no matter what, and OU sucks.

We probably won’t walk back to our truck through South Dallas after the game Saturday, though I’m sure there’s a graveyard or two there. We’ll hail Uber again, then jump in our truck and point ourselves south, and very soon after hitting I-35, I’m quite sure my Miles will fall asleep while I listen to post game nonsense on the radio.

Other than that, all I know about Saturday is that I can’t hardly wait. And that we will most assuredly walk.

The one we took in Austin after the California game I remember because all of my kids are older now, and I clearly recognize they will soon take walks of their own, on their own, and with others. Time changes who you walk with. That’s as it should be.

And so the older I get, the more I try and remember the good walks.

“We lost,” Miles said at the end of our walk that night in Austin, “but we sure had fun, didn’t we?”