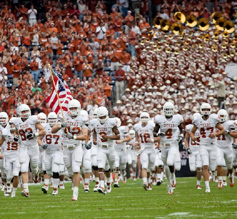 Last Saturday’s white-knuckle win over Iowa State sent me searching for a specific quote. At first, I was trying to remember what Copernicus said about a team whose mascot is the Cyclones, but whose sideline has a guy walking around in a big, red bird costume, but I came up with less than a Ferguson, Missouri grand jury. Then, I recalled something better by a famous American musician. Unfortunately, I can’t confirm the quote, so I’m soliciting the help of the Inside Texas community.

As I remember the quote, it was Duke Ellington speaking. Someone asked him about the differences between a professional and amateur musician. “A professional,” Duke noted, “is someone who can do it twice in a row.”

I love that quote, because it speaks to many things in my life including, but not limited to, my golf swing, playing a guitar lick, and writing a semi-humorous sports column on the Internet. Problem, is, I don’t remember when or where I first read it, and after feverishly and diligently searching the Internet with a patient, focused, workmanlike desperation that lasted until I got bored, I have been unable to verify either the quote or that it was uttered by one of America’s greatest jazz composers.

If any IT posters can help me with this quote, I’d be grateful. Not Aggie-dropping-the-soap-in-a-shower-full-of-collies grateful, but hearty-handshake-from-an-appropriate-distance grateful.

But the quote makes sense. A professional IS someone who can do it twice in a row. I can hit a golf shot, and have absolutely nailed that little white ball on a number of occasions. Problem is, I can’t hit two golf shots in a row. First shot, right down the fairway. Second shot, a slice more crooked than Bernie Madoff. I am completely inconsistent. Consistently inconsistent, as it were.

Which brings me to the Jekyll and Hyde Texas Longhorns.

For the first part of the year the Longhorn offense struggled, looking flat, constricted, and unnatural – kind of like Renee Zellweger’s new face. The defense flexed it’s considerable muscles, shutting out North Texas (the Mean Green score was on an offensive fumble, remember) and Kansas, while holding former offensive juggernauts Baylor and Oklahoma to half their average yards per game. We threw multiple looks, disguised coverages, and unpredictable formations at opposing quarterbacks, giving rise to the now-famous statement by Baylor QB Bryce Petty that his head was “still spinning” after playing Vance Bedford’s minions.

Then Tyrone Swoopes emerged as a legitimate offensive threat. Slowly, almost at a maddening crawl, the playbook was opened for the sophomore, who responded with improved play, confidence, and throwing accuracy. After blowing up OU, Swoopes put on a show against lowly Iowa State, throwing for 321 yards, completing 67% of his passes and averaging 8.9 yards per attempt.

Problem was, in a reversal of positions, the Texas defense played the Zellweger role of Bridget Jones – pudgy, unattractively quirky, unintelligible, and worked over by the college football equivalent of effeminate British weirdo Hugh Grant. Bedford’s legions, once thought to be the mainstay of the team, looked more ineffective than America’s response to ISIS. The Horns gave up a total of 524 yards, a season-high, and acted more bumfuzzled than Fox News trying to explain why the Nineteenth Amendment should be revoked.

Back to consistency: I work with 8th graders for a living, and they are great, sweet little people who society and bad parenting haven’t completely screwed up yet. But they are also ferocious, concentrated balls of surging, raging hormones, simultaneously hating and craving drama. This time of year, when Thanksgiving is still a month away and I’m really starting to push them academically, I average one crying kid every three class periods.

“You need to go sit in the hall?” Sniff. Sniff. Wordlessly goes into the hall.

Ten minutes later I poke my head out in the hall: “You OK?” Sniff. Sniff. Inaudible mumble. Kid gets up and silently reenters the classroom.

I get the same feeling watching this year’s Horns. I understand the Longhorns are trending upward. I am grateful for the excellent work our offensive coordinator Shawn Watson is doing with Swoopes. Some day, Swoopes will be a throwing model of consistency and will no longer hit receivers on the first bounce. I believe with all my heart that Charlie Strong is a brilliant defensive mind, and Texas’ defense will eventually be among the most respected and feared in the nation, consistently able to shut down great offensive minds like Iowa State Offensive Coordinator Jabba the Hutt.

But we’re not there yet. I hope you like roller coasters, fellow Longhorns, because it’s going to be both bumpy and extremely interesting for the rest of the season. It takes time for a regime change. It takes even more time before the lessons learned from the new regime become internalized, automatic and instinctual. I have no doubt we’ll eventually get there, and probably sooner rather than later.

But we may not get there soon enough to salvage this season, and I’m going to have to learn to be OK with that.

Can we beat Kansas State in Manhattan? Hell, yes.

Will we? Probably not. Unlike Duke Ellington, it seems like either our offense or defense (or maybe both) is having problems doing it twice in a row.

Trust me, the great souls of the Longhorn nation will have plenty to do and lots to discuss the rest of the year.

“Buckle your harness until you hear it click. Please keep your hands and feet inside the car at all times.” Oh, boy. This is gonna be good.

A 1986 graduate of the University of Texas, Jeff Conner has held many jobs in his life: husband, brother, uncle, son, oil field roustabout, short-order cook, sandblaster, irrigation pipe mover, musician, retail assistant manager, attorney-at-law, public school teacher, preacher, cartoonist and writer. While he does have a hot, young wife, Conner is neither as clever nor as good-looking as he believes himself to be. Jeff is currently teaching 8th grade math and Pre-A.P. algebra in Taylor, Texas, home of the Fighting Ducks. Conner’s regularly submitted commentary appears in InsideTexas.com and Inside Texas Magazine. The opinions presented do not necessarily reflect the views of the Inside Texas editorial staff.