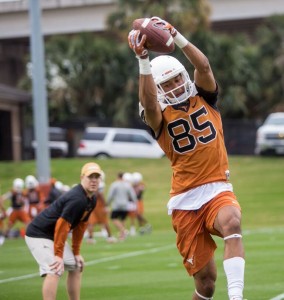 Collin Johnson is a big man. I mean big. He’s quick though, has great feet and is not a long strider. If he played for a Texas 6A high school that actually threw the ball once in a while, he could have been a Top 25 National Prospect.

DeAndre McNeal looks to be in better shape than when he showed up in 2015. He looked like a TE when he got to campus and now he actually looks like a wide receiver.

If Chris Warren is 255 it’s the best looking 255 I’ve see in a while. He still looked good, ran with swiftness and had good feet.

I tell you what, the running play drills waste no time getting downhill. They are quick and attack downhill, ironically, a lot like Baylor.

In the offensive practice structure they practice sides of the line with two centers. When they moved to team, Zach Shackelford took first snap at center.

Brandon Hodges looks good and should help out in the two-deep of the offensive line.

Holton Hill looks really good and Colin Johnson ran right by him in the first rep of 1 on 1’s by swimming a jam. A better throw and it was six.

Pat Moorer has done a good job with the team. All of those freshmen that logged real time in 2015 look a lot better. I think my only shock is that Connor Williams is only at 288 lbs. I thought he would have put on more weight. He’s so good, I guess we should not worry about it.

Kai Locksley is throwing a better ball than he was when he got to campus. Before you say, “He’s supposed to,” it is not a guaranteed thing especially if you do not have the concentration of the staff working on your game specifically.

If you think I’m gushing over Collin Johnson, you’re right. If I was a betting man I’d put good money on him starting game one. I thought that before today. It’s okay to think I’m crazy because they only had on jerseys, shorts and helmets but he caught everything and had success in 1 on 1’s against the starters.

If it was their goal to run a lot of plays during practice, they succeeded. They ran a ton of plays. Guys can call themselves out of a reps and the coaches are okay with it because they just keep right on rolling.

Sheroid Evans looks as healthy and as fast as ever. No knee brace. Just that stabilizing tape that does nothing but helps players mentally.

The offense moved so fast a couple of times that the defense couldn’t replace the corner and Charlie Strong had to blow the whistle to make sure they could get personnel changes in place.

Ryan Newsome seems to be getting first shot at punt return. Warrick looks most comfortable of the second group. He is the same height but he has put on some weight too.

Charlie Strong spent a good amount of time with Matt Mattox and the offensive line.