Football is business; a Letter of Intent is one of the most important contracts you’ll ever sign.

You already play like a gladiator on the field, but, you have to start thinking like a businessman off the field. Whether you realize it or not, your athletic skills have already ushered you into the vast world of commerce.

While you’re reading this post, I want you to forget about everything your “gut” has been telling you. Forget about what schools may “feel” right.

Businessmen have intuition and emotions, but they make decisions (especially life-altering ones) based on research and facts. In the world of business, it’s not enough to “just know it’s right.” You back every move with analytics and market tests that prove what you’re doing will benefit the bottom line.

Having been through this process before (and made many mistakes along the way), there are at least five things you should never sign with a school for.

Making a decision based on any one of them, alone, is dangerous for your football future. You may eventually find yourself disappointed with where you’ve ended up. However, I’m not saying they shouldn’t bear any weight in your decision at all.

A healthy combination of some of these points (along with other factors) could, in fact, lead you to a healthy start of the rest of your future.

I know this sounds wrong. Coaches are who recruit you, who you commit to, and who you’ll give the next four to five years of your life to. I’m not saying coaches aren’t important. In fact, I think they may be the most important factor of all.

Coaches don’t just draw up big playbooks; they set the atmosphere and direction of the entire program. They’re the face and (sometimes) fathers of the team.

The question is: will the coach that recruited you as a senior in high school still be on staff when you’re a senior in college?

Wherever you sign, your head coach probably has three years. If he goes three years without winning (or meeting expectations), he’ll be looking for another job and you’ll be playing for a new coach. But that’s just your head coach.

If your position group were to struggle during that 3-year period, it’s likely your head coach would fire him first. That’s what a captain does—fix leaks in the boat so he doesn’t eventually have to go down with the ship.

With a new position coach you may win more games. And then again, you may not.

Regardless of the outcome you have a new boss and more team transition to navigate. Though rare, I played with guys who had four different position coaches in college—four. That’s one for every season they played. And all of that took place under a winning regime.

That could leave you high and dry.

I don’t know who said this, but I heard it from Mack Brown and found it true every year I played:

Playing ball is in your blood—I get it—you want to play and play early. Playing early gives you status. It means you can compete with guys older than you, although they’re more advanced than you in so many ways.

I love your instinct and aspiration. You should want to play early. Football players play; they’re not content to “just be on the team.” I want to strengthen that resolve because it will serve you well after football is over.

At the same time, I want to warn you. There are coaches who will see your aspiration and knowingly use it against you.

In recruiting, there’s one thing you can never trust: a promise you’ll start as a freshman.

If a coach promises you’ll start as a freshman, he’s lying. Simple as that. He’s lying and he’s not trustworthy. You should immediately hang up the phone, escort him out of your house, or get in the car and drive—whatever the case may be. Then cross that school off your list. At least you’ll know where not to go.

Anything worth doing takes time; don’t be duped by false promises.

You should look at the depth chart. Take a sober look at your strengths and weaknesses. Have a real conversation with your coach about when he sees you getting on the field. It’s easier for skill position players than linemen but still difficult nonetheless. Take a long-term look at things, and don’t make your decision on playing time alone.

Your eligibility will thank me later if it hasn’t been spent on transferring. 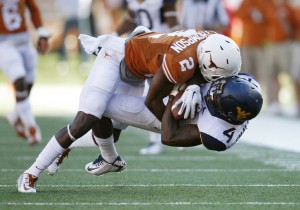 There is nothing wrong with having the NFL as a goal. Maybe it’s the goal, for you. That’s fine.

There are certain schools that send more players to the NFL than others. Some schools are even famous for consistently producing NFL talent at a certain position.

If you’re a defensive back, Texas is known as DBU for a reason. If you’re an offensive lineman, Wisconsin wouldn’t be a bad choice. The same is historically true for linebackers and Penn State. Those schools have a winning tradition, good coaching, and are bound to draw the eye of NFL scouts.

I sincerely hope you have a long, lucrative stent in the NFL (and get out while your body is still in one piece). But I have to insert a scary statistic here because you at least deserve to know:

Only 0.08% of senior high school football players will be drafted to the NFL.

You have three to five years of college football to make sure you’re a part of the 0.08%. But at some point, 100% of everybody goes “professional” in something other than sports. You’ll have a much higher probability of succeeding, then, if you have a college degree alongside your athletic prowess.

If you’re good enough, the NFL will find you. Don’t worry about playing at a school “too small.” It doesn’t take watching Monday Night Football very long before you realize how many starters come from schools you’ve never heard of.

Like I’ve said before: plan as if the NFL will never be an option, then train as if the NFL will be your only option. But don’t let the prospect of the NFL, alone, be the deciding factor of your college choice. You may not make it. And even if you do, there’s so much more to life after football.

Before my junior year in high school I verbally committed to SMU.

It was summer of ’03 and I had just finished the Mustangs’ 3-day camp. (I hated those camps but they were good for recruiting). I received an award, took a walk with the head coach, he offered me on the game field, I accepted and it was done.

There was a lot more excitement than that, but that’s the short of it. I was more than ready to be a Mustang.

I didn’t visit any other schools or think about other options. (I didn’t have other options at the time because I was basically still a sophomore). But even if others had been interested it may not have made a difference. I was going to SMU, and would have signed right then and there if I could have.

The question you should be wondering is “why?”

Why SMU (not that great), so soon (not that wise), so confidently (not that smart)? Why not wait a little bit? Like, until I was a junior or senior or something. Why was a 15-year-old Chris Hall eager to decide the rest of his life, when I should have been playing XBOX and trying to learn how to drive?

The answer is simple: family.

Zach played middle linebacker and was everything I ever wanted to be. He was cool, girls liked him, and was one of the toughest guys I ever knew. He played on varsity (at a 6A school) as a freshman, and that truly means something in Texas.

Not only was Zach going to SMU, but so were two of my best friends and teammates. Another set of brothers (like Zach and I), and we all played together at Irving High School.

So there was my older brother, two of my best friends—oh, I forgot: my high school head coach and the head coach at SMU were also brothers. Seriously. It was one big family affair.

Let me be clear, my high school head coach never pressured me one bit to commit to the school his brother coached at. It was all the same to him. But it sure did make me and everybody in my circle happy when I did.

Momma was surely happy. After all, her baby would only be 20 minutes away from home. My friends and family were surely happy. This was one big package deal dream come true, and we were going to turn SMU around together.

Too bad, that turnaround never happened.

Eventually I de-committed and my brother transferred. People were upset I “didn’t keep my word,” and understandably so. The familial aspect of it all unfortunately deteriorated.

But if I had gone to SMU for anyone else but myself, when times got tough I would have looked elsewhere to place the blame—instead of taking responsibility. No bueno.

Understand college football will probably be the hardest thing you’ve ever done in your life. It will stretch you mentally, physically, and emotionally, and push your limits farther than you thought they could even go. Don’t choose a school for anyone else’s sake. You’re the one who’s going to have to live with it in the end. You’re the one who will be shedding the blood, sweat, and tears. Nobody else can do it for you.

Do listen to good counsel, I truly hope your family is involved like mine was. But at the end of the day it’s your decision. You’ll have to live the consequences, good or bad.

This one is self-explanatory. But I remember how my mind worked as a teenager, and sometimes, the obvious just needs to be said out loud.

Of all my teammates in five years at Texas, I knew of only one guy who stayed with his high school sweetheart throughout college. A huge reason they stayed together: he married her halfway through his freshmen year.

Unless you’re planning on marrying this girl over winter break, I’d go ahead and have the talk with her right now. It will save the both of you a lot of trouble.

Don’t choose a school based on proximity to what will likely be your ex-girlfriend.