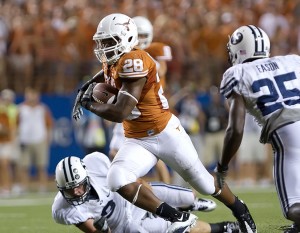 Here are my Five Quick Thoughts following BYU’s 41-7 win over Texas at DKR on Saturday night.

1) Texas has a defense. Sort of. From Cedric Reed to Malcom Brown to Jordan Hicks, the best talent on the UT football roster resides on the defense. Unfortunately, the defense can’t do it all. Texas collected five sacks, three tackles-for-loss, a fumble recovery, and an INT, so they were active as expected. But after only allowing six 1st-half points and holding Hill to 100 total yards, the Cougars exploded for 28 points, 183 total yards – 132 rushing – in the 3rd quarter alone. That killed momentum and moral. They were tired and it showed. I don’t care how good your defense plays, when they know the offense has zero chance of competing, it takes a toll on the mind.

2) Texas does not have an offense. Texas rushed for 2.1 yards per carry. Dear God. Or maybe they do have an offense, but vanilla ice cream would call this performance boring. I’ll admit, Tyrone Swoopes looked pretty good. Add to that he’s playing behind the most inexperienced offensive line in college football with very little chance of getting a push up front and his debut performance looks even better. Texas tried the Power game and failed. Texas tried the underneath routes but couldn’t convert 3rd downs. The Texas defense would gather momentum and the offense would turn it over (two big fumbles in the 1st half, two more in 2nd half). They were almost shutout at home for the first time since being blanked by Houston, 30-0, in 1976. UT finished with 253 total yards, but it didn’t seem like that much.

3) Taysom Hill is legit. For a guy not known for passing, having multiple surgically repaired knees, and working with considerably less talented football players, Hill was the best player on the field on Saturday. He went 18-of-27, 181 yards, one INT, and added 99 yards and three scores on the ground, including a 30-yard TD jaunt where he hurdled UT safety Dylan Haines before crossing the goal line. It was eerily similar to Provo just one year ago. There’s no question he’s one of the best QBs in the nation. Crown him.

4) Swoopes makes nice debut. Tyrone showed very little jitters has he opened the game with eight consecutive pass completions, mostly underneath shots, but exactly what you want from a first-time starter. I thought Watson’s play package for the sophomore signal-caller was appropriate early, but as soon as BYU started putting up points, a need to go downfield went unfulfilled. I’m not sure UT even had the ability. Still, Swoopes stayed the course. He finished 19-of-30, 171 yards, one TD, one INT, but his composure is what I liked the most.

5) It’ll probably get worse before it gets better. The gauntlet of teams UT faces in the next month looks daunting to say the least. Counter that with a Texas team that’s just not very good and you have a forecast of pain for Texas fans in the next few months. The defensive line is a strength, but I’m not sure there’s another on this team. I think we all knew this outcome was possible but nobody wants to be overly negative, especially when Charlie Strong is trying to right this ship. UCLA, OU, and Baylor won’t provide a barometer of where UT is, but they’ll certainly show the Longhorns how far they have to go.