It wasn’t pretty, but football in Manhattan, Kansas rarely is. Texas jumped out to a commanding 19-0 lead, then held on down the final stretch for the 19-14 win at Bill Snyder Family Stadium on Saturday. Here are my Five Quick Thoughts following UT’s win over Kansas State.

1. Texas gets points in different ways.

The Horns put up points in four ways on Saturday. UT opened up the scoring with a D’Shawn Jamison 90-yard punt return. Then Collin Johnson caught a 4-yard fade from Sam Ehlinger for six. Charles Omenihu was next with a safety of Kansas State QB Alex Delton. And Cameron Dicker drilled a 28-yard field goal as well. That’s a rare, but nice balance.

To win on the road in Manhattan, it takes all you can get.

After a first half stat line – 17 of 22, 115, 1 TD, 2 receptions – he completed passes to ten different receivers, including one to himself off a tipped ball. He also caught a pass from RB Tre Watson. He finished 29 of 36, 207 yards, one TD. But it was his game management with 6:20 left in the contest that sealed it. His 3rd down and 11 strike to Collin Johnson for 13 yards was ginormous. His QB Power was big time. 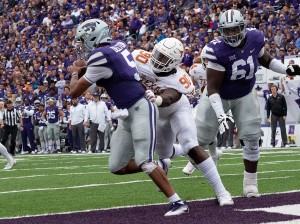 He currently has completed 128 consecutive passes without an interception, the 3rd longest streak in school history. It was another week of zero turnovers. He missed on some big shots downfield early in the contest, yet again made sure Texas was in victory formation.

KSU’s Alex Delton wasn’t effective in the first half, but former starter Skylar Thompson led an 82-yard drive and score to open the second half. Then he led a 16-play, 70-yard scoring march, converting two 4th downs, early in the fourth quarter. But when they needed it the most, the defense made the stops and the offense controlled the ball.

UT rotated the defensive line early in the contest. After Omenihu-Nelson-Hager, it was Graham-Wilbon-Bimage. It kept the d-line fresh. Omenihu was a maniac in the first half with three TFLs, one sack, and one safety (five total, three TFL, two sacks). And Breckyn Hager made the plays in the 2nd half.

Hager has not played up to expectations this season, and he’d admit as much, but his 2nd half was huge. One sack, three hurries, and one batted ball was probably the play of the game. It gave Texas the ball back and they did what they’ve been doing all year – finishing games.

Then the offense puts it in cruise. Heavy doses of Keaontay Ingram, who averaged 6.5 ypc, was imperative. If he’s fully healthy, he needs more than 10 GD carries. Give the offensive line credit, they are improving. Give Andrew Beck credit, when he’s not harassing opponents before kickoff, he’s snagging four catches. Give Collin Johnson credit, he made plays when the ball arrived.

4. The penalties are adding up.

One of the negatives of UT’s 2018 season have been dumb penalties. After seven for 80 yards in the first half, Texas was lucky K-State didn’t capitalize. UT had 10 yellow flags for 104 yards. K-State didn’t commit a penalty all day, which is a damn joke, Big 12 Conference.

The pass interference calls, good and bad, were killers. Kris Boyd had his worst day as a senior. Overall, you might beat a mediocre team like the Wildcats with these fouls. But you won’t win the Big 12. And you probably don’t beat OU next week either.

Some of the penalties are warranted; intense, aggressive play breeds that. But the others can kill you. Texas must clean up this part of the season.

I guess there’s a reason Texas hadn’t won at Kansas State since the early 2000s. So many things went UT’s way. They held KSU to 217 total yards. The Wildcats couldn’t complete a 1-yard pass to end the first half, giving UT it’s first 1st half shutout at Bill Snyder Family Stadium ever.

K-State always punches above weight in Manhattan, KS. Snyder always makes adjustments you have to account for.

But at the end of the day, a win is a win. And sometimes it pays to be lucky.

Of note: OU is next. Let’s get crazy.