The Big 12 media’s favorite pastime every offseason is underrating Kansas State. Last season they stunned the league by holding onto the first place spot in Big 12 play for the first four weeks and upsetting Oklahoma, despite the season opening hiccup against Arkansas State. They opened 4-0 in league play before faltering against West Virginia, fumbling away a chance for victory against Oklahoma State, and then folding down the stretch against Iowa State (45-0) and Texas (69-31) with one more narrow loss against Baylor (32-31).

COVID hit K-State hard, they were constantly having to shuffle through different lineups in positions where cohesiveness and experience really matter like O-line, safety, and linebacker. The Wildcats also had to rely on freshmen Deuce Vaughn and Will Howard in the backfield after quarterback Skylar Thompson was injured, ultimately turning into a power-option team down the stretch as it became clear Howard couldn’t execute the passing game.

Taking regular losses from COVID or COVID protocols while also missing the senior quarterback you were planning to build the team around makes for a tough season. I don’t think anyone around Manhattan feels 4-6 was a failure.

Interestingly enough, it now sets up the Wildcats for a 2021 season in which they can basically repeat the strategy for 2020 with senior quarterback Skylar Thompson (who returns to take advantage of the COVID exception year) and then a more experienced offensive line and improved backfield.

They’re working two angles in order to give themselves a chance to be competitive for a Big 12 title berth in 2021, combining the COVID exception rule with an embrace of the transfer portal.

Kansas State was masterful at maintaining experienced, sturdy infrastructure in the Big 12 under Bill Snyder. The old man had 2.5 methods for keeping his roster well stocked with reliable role players. The first was taking transfers, either from other schools or more often the JUCO ranks. These additions were often key, featured talents in the Wildcat machine but just as often they were filling holes across the roster. The second was their walk-on program, which included taking JUCO transfers as preferred walk-ons as well as their walk-on/greyshirt program for Kansas and Missouri high school kids. Both consistently generated returns down the line including more than a few All-Big 12 players.

From there the formula relied on Snyder exercising the quarterback run game and his overall depth of knowledge on offense to build offenses to feature whatever legitimate skill talent was on the roster. Their playbook could have been described as “a million ways to run iso.”
Defensively the Wildcats would rely on highly sound and disciplined play from veteran units paired with really smart gameplanning.

Chris Klieman has immediately made extensive use of the transfer portal, first in overhauling the Wildcat roster to suit his needs and to resolve the “where are all the running backs?” issue waiting for him in year one. Now the transfer portal is quickly becoming a way of life for the Wildcats and I’m not sure it will ever change. The strategy of plugging in veterans from other schools was already ingrained in the school’s DNA and the transfer portal reopens Manhattan to grabbing talent on a level which was becoming hard to find in the JUCO ranks.

Klieman does intend to be more of a developer of high school talent than Snyder was but the Wildcats are already plugging in six transfers for the 2021 season and could add more. The number 0 seems to be reserved at this point for grad transfer tight ends who project as flexed out receivers (Briley Moore in 2020, now Daniel Imatorbhebhe in 2021) and the defense is getting four additions who could potentially start next season.

Save for Brent, none of these are “space force guardians” who are going to raise the ceiling of the team with athleticism in key positions. However they could make a big difference in allowing the Wildcats to avoid losing steam at positions where they may or may not have a younger class of players developed at a high enough level to guarantee good “infrastructure” for the team strategy.

It’s going to be near impossible for all college football teams, and especially Big 12 teams, to avoid using the portal annually to patch up infrastructure. Why in the world would you allow the lack of a competent guard, safety, or linebacker to limit your team if you have an experienced quarterback throwing to a star receiver or an edge rusher and top cornerback all in place to take your team to exciting heights? No one wants to be the 2020 Oklahoma State Cowboys, who were crippled because they couldn’t get five league-average offensive linemen on the field together in order to support their terrific skill talents.

Teams are now playing to win every year without a longer-term perspective. Coaches are incentivized by the way the money is dealt out and the way they are often evaluated by the recruiting rankings if they aren't winning every year. The transfer portal makes this approach more feasible. College seniors are big winners in the exchange, if you’re in your final season you probably appreciate your program not throwing it away on a rebuild, or else having a chance to transfer to a team aiming to win if they do.

Because the “little eight” of the Big 12 (everyone except Texas and Oklahoma) relies on developing fourth and fifth year starters rather than plugging in nearly NFL-ready talent from the high school ranks, the COVID exception rule which grants an extra year of eligibility to all who desire it is a massive factor in the 2021 season.

The less obvious effect is in creating a large number of potential transfers from smaller schools. There are lots of players changing teams this offseason like Timmy Horne, who was a redshirt senior for Charlotte in 2020 and will now be a sixth-year senior for K-State in 2021. The more obvious effect is with players like safety Jahron McPherson, center Noah Johnson, inside linebacker Cody Fletcher, defensive end Bronson Massie, and quarterback Skylar Thompson who will all return next season for their sixth year at Kansas State.

To Kansas State’s great benefit, you could not possibly pick positions in which it’s more valuable to have guys come back for a sixth year with years and years of institutional knowledge. Fletcher knows the fronts and calls for the Wildcats (Daniel Green may as well by this point) and has been involved as a spot starter for a year’s worth of JUCO ball and then two years in Manhattan. Jahron McPherson knows the coverages and has started at nickel, strong safety, and free safety for Kansas State. Noah Johnson took over at center last year and was really quite terrific, he’ll be directing all their calls this season. All of them were JUCO’s who joined K-State, McPherson and Johnson did so as preferred walk-ons while Fletcher was a walk-on in the JUCO ranks but offered a scholarship late in the cycle and came to Manhattan after a single year at Tyler J.C. in Texas.

Bronson Massie and Skylar Thompson were both high school recruits who’ve developed over time under both the Snyder and Klieman staffs. Massie was an East Texas athlete who needed time to turn his raw, 210 pound athletic body into the skilled, 260 pound frame he carries today. Massie really came alive in 2020 thanks to steady weight gain but also the opportunity to play defensive tackle in their passing downs package where he could out-quick guards. Everyone knows Thompson at this point, a strong passer with several banked years of playing quarterback and then the quickness and power to be a game changer in the red zone or short-yardage with the quarterback run game.

Between COVID exceptions and/or transfers, Kansas State is going to bring a highly experienced roster into the 2021 season to rival all (save perhaps for literal rival Iowa State) in terms of being able to field savvy veterans. A lack of infrastructure or top space force weapons on offense put a ceiling on K-State in 2020 and they still bumped up against it until injuries and COVID protocols brought them down. With nine or 10 different offensive linemen back who got starts in 2020, all these exception-pulling seniors and transfers, and then a few promising talents in the space force, the Wildcats may be able to put together a much stronger team than expected.

Welcome to the new reality of Big 12 football, the transfer portal is going to incentivize teams to give every season their best shot, which in turn could create even more of a “crabs in a bucket” effect for the league.
Last edited: Feb 18, 2021
Reactions: davecf, rmannucci, quo_vadis and 9 others

Ian Boyd said:
The Big 12 media’s favorite pastime every offseason is underrating Kansas State.
...
Welcome to the new reality of Big 12 football, the transfer portal is going to incentivize teams to give every season their best shot, which in turn could create even more of a “crabs in a bucket” effect for the league.
Click to expand...

Wow, you nailed the analogy for K-State and the Big 12. How OU manages to give a giant stiff arm/claw to the rest of the Big 12 every year has been impressive. 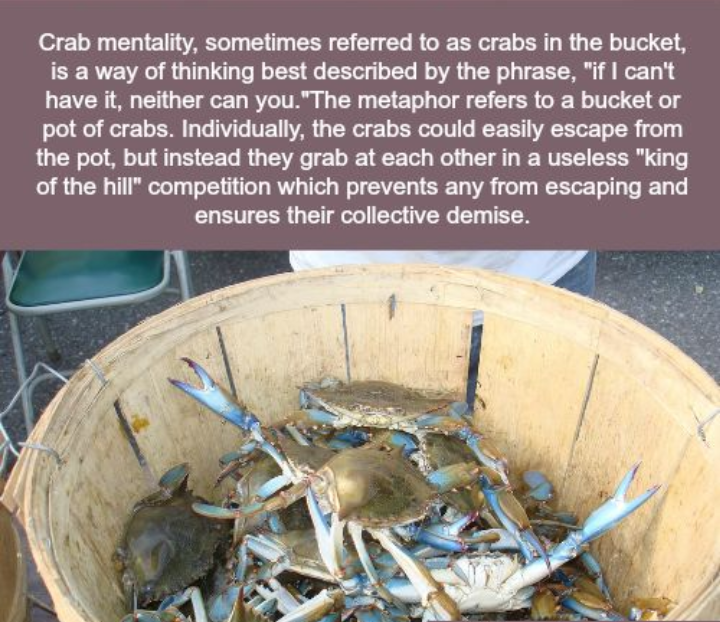