The greater CenTex area has produced an average of 42 FBS signees per cycle over the last three years. For comparison, the state of Virginia averaged 45 over the same window. CenTex would safely rank as a top 20 “state” in FBS talent production.

For this series I wanted to find out which schools and areas did the best job of producing D1 talent within a four-year sample size. In addition to examining their track records, I also wanted to see how the respective prospect conveyor belts were shaping up in the 2022 season. Therefore, I made the call to use the 2019-2021 recruiting classes in addition to the 2022 class which is sure to fluctuate on a school by school basis as we learn more about this crop of rising seniors.

Another reason I used a four-year window to measure success was to ensure the rankings were actively reflecting the volatile shifts in the HS to D1 pipeline based on new coaching hires, demographic shifts, school district rezoning, and dry stretches/surges by random schools.

I wanted the point system I used to measure schools in this exercise to be fairly simple so I decided to give 1 point for each confirmed FBS signee, 1 point for a 2022 player with a 247 composite rating and P5 offer, and .8 points for each 2022 prospect with a FBS offer that wasn't ranked.

In total I checked 46 high schools across the greater Central Texas area that I felt had a chance to potentially crack the top 10 to make sure I was doing my due diligence. However, no matter how many schools I check I'm sure eventually during this series I'll miss one simply because of how many great programs there are across Texas.

I also should mention that I am aware that some schools or areas I covered in this list might not fit your borders of “Central Texas”, but I wanted to combine the SA and Austin Metro areas while also including the greater Waco and College Station areas. The sub regions I used to make up greater CenTex for this article were “Super CenTex,” Brazos Valley, Hill Country, Austin, and SA.

While I considered weighting the score to give more points to schools that produced higher level talent, I wanted to stick with the "factory" analogy at the end of the day and reward whoever was able to get the most dudes off the assembly belt and onto the next level. If you have any suggestions for this extremely arbitrary ranking system, hop in the DMs and let me know what you think. 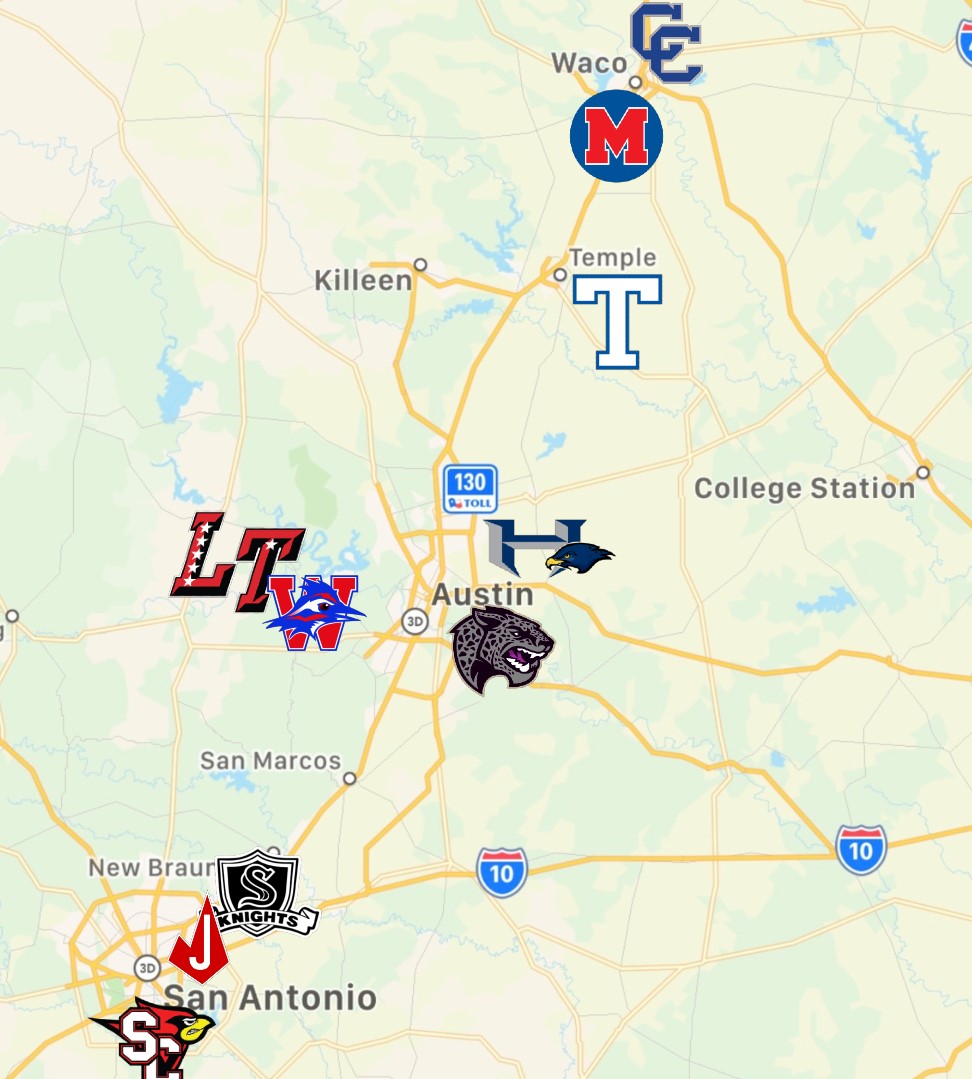 Things are looking up on the Eastside of Austin, LBJ is fresh off of its deepest playoff run in school history and just sent two four-star prospects to two of the best college football programs in the country. Similarly to SOC in the DFW area breakdown, LBJ has more working against it than most prospect factories. With an enrollment of 858, LBJ is the second smallest school on this list and has to manage with limited athletic funding from Austin ISD. In spite of those structural disadvantages the Jaguars are setting themselves up to produce more and more D1 caliber players on a consistent basis.

2021 OLB Brendan Jones was a longtime UTSA commit who decided to flip to Columbia after he was accepted into the school. I felt it was unfair to penalize LBJ for a kid making a wise decision to take an Ivy League education even though he had a D1 roster spot. I made a similar judgement call regarding 2021 ATH Cinque Williams for Southlake Carroll in the DFW article

San Antonio Southside being on this list might come as a surprise to you, but once you dig in and research the Cardinals it’s clear that head coach Ricky Lock is building something special. Southside has been a historically weak program. Before Lock took over in 2014 the program had a record of 167-429 and had never won a playoff game. Since then Southside has a 49-28 record with multiple nine-win seasons, the first two playoff victories in school history, and last season secured its second district title ever. 2022 QB Richard Torres is one of the more impressive QBs I’ve studied so far this year, and is sure to be a P5 prospect.

The Cadets are the smallest school we’ve covered in this series so far, with an enrollment of only 621. The 2020 class that sent four kids to D1 schools is the best pound for pound class in recent TXHSFB history. However the well isn’t drying up for Connally, 2023 RB Tre Wisner already has offers from Texas, Ohio State, LSU, and Oklahoma and is sure to add more before he starts his junior campaign.

It isn’t fair to mention Waco Midway as a prospect factory without talking about its special 2018 class that had five D1 signees and led the Panthers to the 2018 state championship game. However, even without that remarkable group Midway still holds its own as one of the best producers of talent in Central Texas. The Panthers also are currently playing in the toughest district in the state of Texas with Cedar Hill, Duncanville, DeSoto, Waxahachie, and Mansfield as some of the more notable schools. A more reasonable draw in 2022 UIL realignment should have Midway back competing for titles.

Since its establishment in 2004 Pflugerville Hendrickson has been a recruiting constant in the Austin area, producing players like 2012 ATH Daje Johnson and 2014 RB Samaje Perine. Hendrickson gets the crown for best “prospect factory” during this window in the competitive north Austin cluster which is expanding rapidly and has prominent state powers like Cedar Park, Round Rock, Georgetown, and Hutto.

For the most part I’ve been pretty proud of the work I’ve done during this series and even though I had questions about the system I was using it seems to have done a pretty good job, but here is the exception. Westlake is clearly the dominant program in the state of Texas right now. The Chaps have won back to back state titles and dethroned North Shore’s attempt at winning three straight in 6AD1. With Clemson commit Cade Klubnik returning for his senior season and the likelihood of dropping back down to the 6AD2 bracket, Westlake has an amazing opportunity to be one of the rare schools to pull off the three-peat.

As far as the prospect factory analysis only having two signees from 2019-2021 clearly hurt the Chaps, but their status as a prospect factory shouldn’t be questioned. In 2017 and 2018 the Chaps had six players take FBS scholarships, and including the 2022 group Westlake is projected to have 10 of their last 11 D1 players sign with Power 5 programs.

My last point on Austin Westlake is that similar to DFW blue blood Highland Park, something that you have to keep in mind for the Chaps is that a fair amount of their best players will take preferred walk on spots at power programs instead of gunning for a G5 FBS scholarship. The 2021 group that won two state championships had three of those players, two time state title game MVP DB Michael Taaffe (Texas), RB Zane Minors (Texas), and DL Hayden Bray (Oklahoma)

Cibolo Steele has garnered the moniker DBHS (a play on the often used “DBU”) for its ability in recent years to produce defensive backs at an extremely high level. Since 2018 the Knights have had five DBs sign D1 LOI’s and 2022 CB Daveon Hook seems to be the next in line. Steele will need to rebuild this year after losing three year starting QB Wyatt Begeal as it looks to get back to competing for state titles.

Temple is one of the most iconic programs in TXHSFB, beginning play in 1905. The Wildcats are a rare mix of storied history and gamebreaking talent. Temple head coach Scott Stewart has done a fantastic job for the Wildcats since taking over in 2016, going 48-16 with Temple’s first state title appearance since 1992. 2020 WR Quentin Johnston might not be on the national radar, but the TCU WR is one of the most talented WRs in the country and is poised for a breakout season. 2023 ATH Mikal Harrison-Pilot is next up at Temple High, the versatile athlete recently picked up offers from USC, TCU, and Baylor.

You can’t talk about Lake Travis without first talking QBs. For those unaware Lake Travis is pretty objectively the best Quarterback Factory in the country. Todd Reesing, Garrett Gilbert, Baker Mayfield, Matthew Baldwin, and Hudson Card are all prime examples of highly rated QB recruits for LT. However, because of the success that LT has had producing D1 QBs it gets pegged as a one-trick pony when in fact it is churning out D1 prospects across all positions. 2019 WR Garrett Wilson has a chance to join Baker Mayfield as the next Cav to get drafted in the first round of the NFL Draft if he continues his development for Ohio State. 2023 QB Bo Edmundson is next in line on the QB conveyor belt, Edmundson stepped up this year for the Cavs due to injuries and shined when he got his shot.

The six-time state champs take the No.1 spot on the list and the crown of the best Prospect Factory in Central Texas. The 2019 recruiting class for the Rockets was special, led by composite five-star DeMarvin Leal and the duo of Sincere McCormick and Rashad Wisdom who took their talents to UTSA. McCormick’s All-American season in 2020 and TXHSFB legend Jeff Traylor being hired as head coach has opened the doors for the Judson to UTSA pipeline that you see below. 2021 OL Kam Scott for example had multiple Power 5 offers and decided to stay close to home with the Roadrunners. Even though the 2020 season didn’t live up to Judson’s high standards, I don’t doubt that the Rockets will be back competing for regional titles sooner rather than later. A prospect to keep an eye on for Judson is 2023 DE Johnny Bowens. Bowens has an offer from UTSA, but the two-sport standout will surely explode on the recruiting scene as he gains more exposure.

A ton of fun putting this together for CenTex. I was kinda surprised none of the Round Rock, NEISD, or CStat schools broke into the Top 10. When I do this again next year this will 100% be the list that changes the most. Nearly 15 teams were stuck with a score of 3 and couldn’t get over the hump.

When I started this series I knew I would eventually miss a school along the way just because of the vast amount of talented programs across the state. However, forgetting to mention the Manor Mustangs who will likely end up with six Power 5 prospects during this four year window and were a State Semifinalist in 2019 is pretty inexcusable on my end. Manor should be tied with Cibolo Steele and Temple for 4th place in this list, and when you look at the players the stangs have produced in recent years it’s easy to see why. Again, apologies to any Manor alums on the board.

Also worth mentioning that 2021 Lake Travis ATH Wesley Irwin was not listed and will be continuing his athletic career on scholarship at Air Force.
Reactions: DocHorn11 and CaliHorniaBoy

Six of Judson's 8 going to UTSA. Wow.
Add Weston Stephens to SHA (now FBS) and Wesley Erwin to AFA and that puts the Cavs at 8.8 total points with four P5 guys vs Judson's 1.

East Texas will be interesting for sure. Great series and thanks for doing all of this research.
Reactions: wabash and CaliHorniaBoy
F

You could make the case that the San Antonio schools should be in the South Texas region along with the RGV and Coastal Bend schools.