Why everyone runs mesh now

Everyone in football is running mesh right now. Everyone. Tune into any game on Saturday and you'll see teams break it out for third-and-almost anything less than 10. Other teams will run it regularly on first and second down as well.

In particular, a good number of these teams are running a mesh concept called "mesh sit." In general, mesh means two shallow crossers underneath, perhaps slapping hands to guarantee the right spacing and creating a rub that will tend to break one free out the other side. There's a few things the other three skill players can be doing on mesh, the crossing action in the middle creates a few different options.

In mesh sit, the running back runs a wheel, another receiver runs a curl in the middle of the field, and then the other receiver typically runs some sort of deep "alert" route that the offense will throw if they like the matchup they're getting. Here's an example of how it looks with a curl route outside rather than a deep "alert" post route. 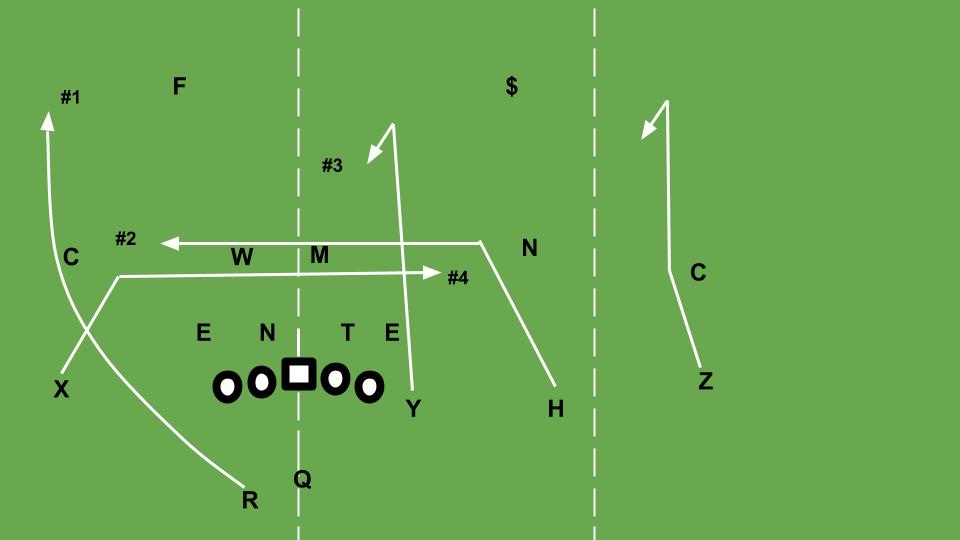 Back in the day of the pirate, Texas Tech was very big into "mesh." It's always been an Air Raid staple, along with other crossing patterns like shallow cross and Y-cross. I don’t recall Tech running this brand of mesh with the curl route in the middle but Mike Leach has since incorporated it into his offense.

The story of mesh’s popularity in the college game has a different sort of foundation though then what is on film from Leach’s teams at Texas Tech. Not that Leach doesn’t get any credit, but there’s a different source that really helped put the scheme on the map.

This version really started to take hold in college football during the 2017 season. Urban Meyer had just removed his offensive co-coordinators Tim Beck and Ed Warriner after a rough season in which the Buckeyes had to eek out wins by running the tread off quarterback J.T. Barrett. Here were his numbers on the year:

Meyer made a big hires that offseason on offense. The most celebrated one was bringing aboard Kevin Wilson, who’d been fired as head coach at Indiana but had built some good offenses there and the legendary 2008 unit back at Oklahoma that helped make tempo famous. He also hired a former Chip Kelly assistant from the Eagles (and 49ers) named Ryan Day.

Day proved the more influential, because he brought an alternative option to the outside curl patterns Wilson had used in the past, Chip Kelly’s mesh-sit concept. The Buckeyes made it a mainstay in their offense and J.T. Barret did this:

Beyond that major leap in explosiveness, the Buckeyes also made better use of their skill talent (Parris Campbell, KJ Hill) and were better shored up at back-up quarterback. J.T. Barrett was knocked out of “the game” against Michigan and Dwayne Haskins came in and quickly turned a 20-14 Michigan lead into a 31-20 Ohio State victory. The following year he obliterated Michigan as the starter with that play in a 62-39 triumph.

The next big breakthrough for mesh, and this mesh-sit play in particular, was Super Bowl LII between the Philadelphia Eagles and the New England Patriots. Going into the game the main story was how Philly was incorporating these exciting new “RPOs” into the offense and how defensive guru Bill Belichik would handle them.

But guess what man coverage doesn’t handle so well? Rub routes, like you get on the mesh play that the Philadelphia Eagles had added under Kelly and kept in their offense under Doug Pederson:


https://twitter.com/i/web/status/1316826184387366914
This was a big moment for mesh. The Patriots couldn’t cover it throughout the game and the Eagles could mix it in from 11 and 12 personnel (they had great tight ends) and help break open their other receivers.

The key that has made mesh so popular across the college game these days is that it's so effective against man coverage. Guess what sort of coverage has become increasingly common in the era of the RPO for the reasons I outlined above?

Nowadays the two favorite schemes for many top defenses are single high coverages that allow them to drop another safety between the hash marks to help cover quick routes and MEG (Man Everywhere he Goes) quarters schemes that ask the cornerbacks to play man coverage outside the numbers against receivers while pattern matching in the middle. Against either scheme, mesh is a good way to help free up receivers from man coverage and spring speedsters from the congestion it creates in the middle of the field.

From this point on, it’s been ubiquitous across the college game. Everyone is running it, it’s just a matter of the degree to which it’s emphasized. Even Texas under Tom Herman has been running it for the last few years, although certainly not nearly as much as they should.

It's a great fit for unlocking a variety of talents. Ultra fast receivers that either need help getting a clean release or finding open grass can make hay running through the rub routes across the middle. Big, blocking tight ends that aren't necessarily as useful in the passing game have a role in helping create that rub. Good pass-catching running backs become deadly. Deep threat receivers can run alert routes on the outside and draw 1-on-1 coverage if the defense is overly concerned matching the crossers and curl route. A solid chain-moving wideout that thrives at finding space in a zone can run the curl.

Maybe most of all, it's a simple progression for quarterbacks and has made an effective passer out of many a quarterback who's a solid decision maker but can't stretch the field with deep throws. That makes it a perfect complement for a dual-threat quarterback like J.T. Barrett and countless others.

So the next time tuning in to a game anywhere around the country, watch for the quick crossers underneath even if you're celebrating the beloved running back wheel route. Mesh is becoming something like the inside zone of modern offense.
Last edited: Oct 16, 2020
Reactions: texification, dlime86, ripharley and 10 others

It's especially nasty when the defense adjusts to it by playing inside leverage and you run fake mesh out routes.

Only way to stop it is zone coverage, and if they run zone you just RPO the hell out of them.
Reactions: ripharley, wabash, DuvalHorn and 5 others

shanew21 said:
It's especially nasty when the defense adjusts to it by playing inside leverage and you run fake mesh out routes.

Only way to stop it is zone coverage, and if they run zone you just RPO the hell out of them.
Click to expand...

We got a big play with Whitt running a little pivot back off the shallow cross that Ian highlighted in the gameplan thread.

We tried that a few times vs TCU but our receivers had a hard time getting away from Wallow, annoyingly.
Reactions: ripharley, shanew21, GoHornsGo90 and 2 others

How many times could Texas get away with running mesh and variants off of it? I have no idea how many times full gasoline air raid teams run it per game.

shanew21 said:
It's especially nasty when the defense adjusts to it by playing inside leverage and you run fake mesh out routes.

Only way to stop it is zone coverage, and if they run zone you just RPO the hell out of them.
Click to expand...

Makes me wonder how long until this is an option route?

Most notable instance of Texas running mesh was the Tre Watson receiving TD in the 2018 Texas-OU game in the Cotton Bowl.
Reactions: starvedrock314, sherf1 and wabash

stilesbbq said:
How many times could Texas get away with running mesh and variants off of it? I have no idea how many times full gasoline air raid teams run it per game.
Click to expand...

We used to call it Mesh and then mesh return (which had the receivers start to mesh then work back outside). We also varied which strong side receiver would mesh and who would run the vertical route to keep safeties deep. You could squeeze down the formation and use the Z to mesh and work the Y or H on a corner route. You can vary the play quite a bit actually. So you could probably run at least 10 times because you can build variations off of it.
Reactions: sherf1 and Ian Boyd
M

OU and Baker Mayfield beat Ohio State in Columbus in 2017. That was the year that Baker planted the flag. OU lost to Ohio State in 2016 in Norman
Reactions: sherf1
M

Also I think about 50% or more of Kyler Murray's pass plays at OU were just mesh.
Reactions: Ian Boyd

It's a pretty high percentage throw with the ability to break into long gains with the right guy making the catch. It is definitely something that would work pretty well for us when the run game is struggling. Short, high percentage passes, especially if the RB is involved can make the defense look forward and then you can hit them with a deep ball over the top.