There are three doors available for the 2014 Texas Longhorns to walk through this coming Saturday in Lawrence, Kansas.

Door No. 1 is one in which Kansas defeats Texas and Longhorn nation mistakes Paul Finebaum for a prophet rather than a clown in a fit of panic.

Door No. 2 features an unimpressive Texas victory that evens the record to 2-2 but sets up a grim October that seems certain to begin with a pair of blowout defeats.

And behind Door No. 3 includes a blowout victory over Kansas on the road, the clear assertion of Texas athletic superiority finally projected, and a confidence builder for the team that sets them up to give Baylor and Oklahoma all they want before picking off the remaining 2nd and 3rd tier Big 12 opponents on the schedule.

Considering the starkly different way Kansas plays at home, that is to say much better than when on the road, there’s a chance that the door Texas opens proves to be any one of the above, but here’s hoping it’s behind No. 3.

Here’s the dilemma for Kansas on offense. They actually have a decent OL, a couple of very dangerous receivers, and a quick moving QB.

But its offense is terrible.

The offensive line is essentially a cast of maxed out and undersized upperclassmen that demonstrate what’s possible for experienced 2- to 3-year players regardless of talent level. They pick up pressures pretty well and they get movement behind double teams but they’ll be totally outclassed by Texas’ DL and linebackers whenever they find each other on equal footing.

WR’s Tony Pierson and Nick Harwell are straight up dangerous playmakers, but Cozart has proven to be largely ineffective when throwing them the football, so their impact is marginalized. They have some good individual pieces but the sum total isn’t great, sound familiar?

The obvious course of action for Kansas in this game is to run the ball as much as possible and look to hammer the perimeter with screens but that’s not going to generate many points against Texas playing nickel with Hall and Colbert flying downhill to wrap up against either.

If Kansas commits to spread-option tactics and taking the air out of the ball, they have a chance to keep things close assuming Texas’ offense doesn’t blow the doors open.

Here’s the dilemma for Kansas on defense. They have a pretty solid defensive backfield, including star linebacker Ben Heeney, and they have a lot of experience and know-how in its secondary…but their starting DL goes 240-250-297-265 and the larger backups aren’t good.

Consequently, their best bet is to bring a lot of disguise and movement with their front to create negative plays and to keep opposing OL from consistently getting their paws on their smaller defensive front and shoving them around.

Naturally, they aren’t very good at disguising their pressures and shifts. If Swoopes can remain calm and patient, he should be able to get KU’s D to tip their hand early and often so that their blitzes have the result of turning the Jayhawks into sitting ducks.

Duke QB Anthony Boone was able to accomplish this aim and ripped them early with a couple of touchdown passes before the Jayhawks tightened up. Of course, then Duke took them apart on the ground for a cool 331 yards at 9.6 yards a pop.

This unit plays very differently at home but their lack of players along the DL prevents this from coming together as a unit that can stand up to a either an offense with elite traits or one with balance.

The first is to play the same kind of conservative game plan that we saw against BYU or UCLA with the intention of eventually leveraging Longhorn advantages and taking over the game through superior execution by superior athletes.

If Texas has made any significant improvements in the bye week since playing UCLA then this strategy might be the most prudent and would more likely than not result in victory.

The other option is to step on the gas early with aggressive blitzing, quick tempo, and early shots down the field in the passing game. In essence, to come out and look to throw a haymaker and see if they can put Kansas down early and eliminate the chance of losing a close game in a hostile environment down the stretch.

The risk here is that turnovers or mistakes gift Kansas an early advantage that makes the other option, wearing them down in the 2nd half, a chancier proposition.

The choice Strong makes could tell us a lot about how he prefers to go about the business of dominating opponents in the future when this project really gets off the ground.

First of all, what is Texas going to do at nose tackle without Tank Jackson? Early reports suggest Boyette and Ridgeway will handle that duty, but are they ready to be the repeated focus of double teams?

Can they even force the double?

Here’s what Texas could be facing in terms of Kansas attacking the middle: 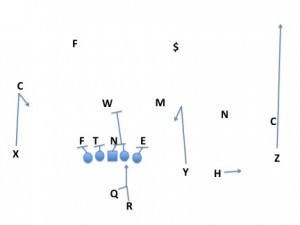 This is a POP play of a variety similar to what Texas has run this season. In this instance they get a double team on Texas’ non-Tank Jackson nose tackle and they get Edmond in a run-pass conflict while putting Texas’ young field safety in position where he needs to break on the ball quickly.

It’s nothing backbreaking, unless they put Harwell at the X and he can break a tackle on that hitch route, but it should be evident that if Texas doesn’t get solid nose tackle play to protect the middle linebacker then it becomes much more feasible for Kansas to make consistent gains and move the ball by spacing out Texas’ defenders.

If this is a major problem against Kansas, then Texas can adjust by dropping that strong safety down and allowing Edmond to focus on stuffing the run. Cozart doesn’t have the arm or the vision to punish an aggressive approach by Texas.

However, if Kansas has some success here and Texas is forced to adjust, that could be ominous for future opponents. That would suggest either that the nose can’t protect the middle linebacker or that the strong safety is too slow in bringing support. Texas’ ceiling on defense is much higher if they can vacillate between two and single high safety looks without having that choice dictated to them by a team of Kansas’ quality.

Second big theme against Kansas; do we see an evolution of Texas’ personnel along the OL?

The great hope is that Darius James can take over a tackle spot, free up Kent Perkins to move back to right guard, and allow Doyle to become a back up rather than the focal point of the Texas run game.

Evidently that’s expected to happen at left tackle, which suggests that James’ is more of a mobile guy right now than a mauler or else you’d expect him to slide in at right tackle.

The ways in which this benefits the team with the run and pass game could be numerous.

For instance, right now Texas is primarily an inside zone and power oriented team, in part because these plays mesh well with the quick passing game that Swoopes excels at, and in part because outside zone requires great blocking from the play side tackle spot. Perkins hasn’t yet mastered the art of blocking the edge on outside zone, which is basically a matter of either trapping the end inside of you and pushing him backwards or allowing him up field only to shove him sideways towards the sideline. He lacks a feel for controlling his quicker opponents in these instances and thus doesn’t always create good creases for the back.

If Texas can get good, mobile perimeter blocking at both tackle spots, that opens up the world of outside zone for this team, which would be very useful since many of the linemen are still smaller and not yet adept at moving the pile on inside runs.

The more obvious benefit to the run game is in replacing Doyle’s punchless (though accurate) zone or pulling blocks with those of the bigger Perkins. Not to pile on Doyle, who clearly understands his assignments and doesn’t give up much penetration unless a defender goes through him, but he doesn’t create much space for Texas’ RBs to exploit.

Finally, in addition to being unfamiliar with the art of handling defensive ends in space on zone blocks, Perkins is also rather raw in his technique. The teams on the schedule with good edge pass-rushers are going to eat him alive if he doesn’t improve or move inside. Place two natural offensive tackles at said positions? Perhaps Texas can find it easier to protect Swoopes in conference play.

The last theme is the most obvious: Swoopes progression as a quarterback.

You have to wonder if Watson doesn’t somewhat enjoy the fact that Swoopes is such a raw project. If Swoopes is capable of the routes and defenders in his head better than he does the playoff selection process, then Watson can slowly mold him into a QB who can manipulate defenses with his eyes before shredding them with his laser beam throws.

The 2nd touchdown pass against UCLA was evidence of this potential and was arguably the best play of Swoopes’ career. He dropped back, read the defense, and then quickly turned and fired the perfect ball to Harris. If he can do that with multiple concepts and through multiple reads he’ll be a star.

As we’ve detailed, doing this will require Ty to make major strides with his footwork moving from one progression to the next in the pocket, particularly when under pressure. If he can’t set his feet properly, those precision air strikes become balls that sail over targets into the waiting arms of DBs, ala the spring game.

Maybe Kansas doesn’t do this but eventually someone will play Swoopes with wide containment and look to force him to make plays in the pocket under duress until he proves he can. Eventually is probably the following week against Baylor and if not then than definitely in Dallas.

If these themes all trend positive, Texas will stomp Kansas into the dust and might have a chance at giving Baylor and Oklahoma all they want if not quite managing to beat either. If the trends are negative? Well, there’s still a lot of football ahead and time for all these pieces to come together.