The main story with Baylor and the most media attention will generally focus on the offense and Bryce Petty. The “counter” narrative is when people inform you that BU’s running game is actually very good and important to stop.

If you hear anything else about them, it might be “their improved defense” which of course, is the real reason they are now an annual Big 12 contender.

Texas has a good defense with great athletes, so they won’t stop Baylor but they will slow them down. The real question of this game is not “how does Texas stop Baylor” but “how can Texas score on Baylor?”

Adjusted stats tell a frightening story with Baylor ranked No. 3 in the nation, No. 1 in rushing D, 2nd in passing D, 1st on standard downs and 3rd on passing downs. Obviously they haven’t faced any high-powered offenses yet, but they’ve treated the offenses they have faced the way that a great defense should. They’ve totally overwhelmed them.

Since Texas isn’t a good offense, that should be concerning to Texas fans.

Who are these guys?

Baylor’s approach to defense is as aggressive as its approach on offense. They want to stuff everything you’re trying to do and get the ball back to their offense as quickly as possible.

That may come from you beating them over the top or putting up a 3-and-out, but they aren’t stressing about which. The more possessions that occur in a game, the more opportunities their own offense will have to hit some plays over the top. Chances are, they’re going to hit more of those than your offense.

Scheme wise they are very similar to Michigan St, at least in terms of their base defense and coverages. They play a 4-3 Over front backed by Cover 4 on the vast majority of their snaps. Their corners play a lot of press coverage even though they get inconsistent help from the safeties.

On a given down, The Baylor D looks like this: 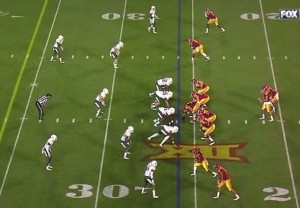 The nickelback will play the run aggressively while their “cover safety” will then pick up the slot receiver in man coverage. That player, Terrell Burt, is basically a 3rd corner on the field and he plays pretty shallow to take away any easy passing angles throwing to the slot receiver off play-action.

If you try to spread them out, they’ll happily play any of their linebackers outside of the box since: A) they all have the speed to reach their gaps from a deeper alignment and B) the safeties are packed in tight and bring run support in an awful hurry.

The only easy passing window they will routinely allow is a throw outside the hash marks to a slot receiver, because very few college QBs can make that throw accurately and consistently.

As it happens, that’s one of the only things Texas’ QB is good at, so at least the Horns have that.

Baylor loves to bring overload blitzes with six or even seven defenders flying into the backfield and have a lot of faith in its secondary to hold up in man coverage, or its offense to match points. BU’s other main schematic wrinkle is its array of 3-4 fronts they’ve unleashed this year: 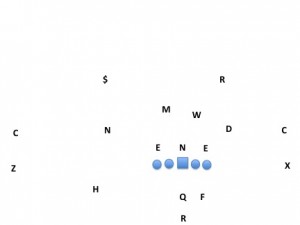 They’ll play Oakman and either Palmer or former HS great Javonta McGee at the end spots with Dre Billings at the nose tackle. At Big 12 media days, Iowa State’s fantastic center, Tom Farniok, said Billings was the strongest player in the conference but simply hadn’t learned how to use his strength yet. Let’s just say that light is starting to come on. Raulerson better eat a few extra cheeseburgers this week.

I mention their 3-4 for this simple reason, if they can play that on 1st down and stuff Texas’ runs, this game is over. Done.

Baylor’s 3-4 is terrifying for the way in which it allows them to field even more speed on the field than they already do, which is a lot, and completely eliminate any space on the perimeter for the offense.

Personnel wise, Baylor has a few interesting players on this team. Although they turned over seven starters from the breakthrough 2013 defense, Bennett really loaded up on speed in the last few recent recruiting classes.

Baylor’s starting ends, Oakman and Palmer, made more plays last year than the starters who were simply experienced seniors who’d bled for the program. The Bear defensive line has tremendous athleticism and depth although many of these guys are a year away from realizing their potential.

Oakman, or Groot as we might call him, is the most notable player on the roster. He may be something of a one-trick pony who’s skill is simply being longer, stronger, and faster than almost every offensive tackle in the country. He’s listed at 6-foot-9, 280 pounds, and he plays with good pad level. He can beat a tackle inside or outside and is a nightmare to try and run the ball towards. He’s also the key to their 3-4 front since he has the size and power to fill a B-gap as easily as controlling the edge.

Texas is going to have to cut him on the backside of zone plays very effectively to prevent him from wreaking havoc. You have to hope Harrison plays in this game just for the chance to see two enormous athletic freaks go at it. It’s possible that a tackle with a powerful enough base to survive his bull rush can handle his pass rush.

In the defensive backfield, middle linebacker Bryce Hager and boundary corner Xavien Howard are the most interesting figures. Hager is blazing quick and makes the calls on the field. His speed allows them to cheat him outside to take away easy quick passes that many offenses thrive on without losing his presence against the run.

Howard is a legit 6-foot-0, 200 pounds and can flip his hips and run with your receivers from a press alignment. If he can do that against Marcus Johnson, Sterling Shephard, and some other players on the schedule, he’ll have a career in the NFL.

Who are these Baylor guys? They are a defense that is looking to suffocate you with tight alignments, team speed, and some rare athletes. How does Texas score on them?

Texas’ offense has a few major responsibilities in this game, they have to score points because Baylor isn’t going to be shut down, but they have to do it in a measured and paced way because Texas can’t get in a track meet.

The path to scoring points is going to have to come from the following strategies:

Everyone I’ve talked to about this game agrees, Art Briles is going to try and send a message in this game. Baylor could probably play base defense, perhaps even back its safeties up a tad, and watch Texas trip over themselves trying to get down the field.

I don’t think Briles is going to follow that game plan. I think he would prefer to bring heavy blitzes and press coverage at Swoopes and look to have Bevo fitted for a coffin by halftime.

Swoopes has to connect deep early in the game and create some breathing room for the offense. Baylor is daring you to do this with the fade route, one of the lowest percentage plays in the book, but the better play is the post or a seam route.

If Daje Johnson is reinstated and ready to go, it’d be a good game to test the work he’s done as a receiver and send him up the middle to see if safeties Burt or Orion Stewart can turn and run with him.

The old wheel route to Johnson that Case McCoy burned teams with last year would be another good option.

Texas has to be measured here because taking a lot of deep shots and causing a lot of quick drives is a formula for a Baylor blowout but unless Swoopes proves he can punish the blitz, the Bears are going to bring it.

The RB screen we saw in the spring game thrown to Daje would be another worthy option.

Sam Holl was a bit too unathletic to play safety in the Big 12. However, Bennett’s early tinkering with the 3-4 uncovered the reality that he was a good anti-spread linebacker. So they moved the nickel, Ahmad Dixon, to safety and Holl to nickel and the rest is history.

These are the two players that Baylor has most struggled to replace in 2014 and the two that can be most easily targeted by Texas’ passing game.

Brence can be had by Swoopes’ cannon shots to the perimeter that require a high degree of explosive quickness, length, and anticipation by a nickel to defend. For instance, a quick out to Shipley, ideally not on a rollout that draws in extra defenders: 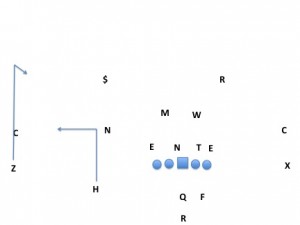 Another ball-control option is to use concepts like “levels” with Daje at that H position and a faster receiver like Shipley or Harris at the Y spot to attack the backside safety, Stewart. 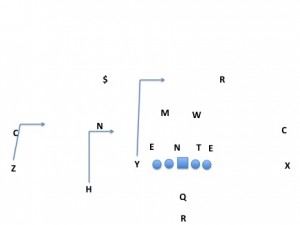 That puts Hager in a bind, drop deep to help Stewart control Harris on the seam route or stay shallow to keep Daje from catching the ball short on the run?

Finally there’s four verticals with Swoopes’ comfort throw, the comeback route, available on the outside: 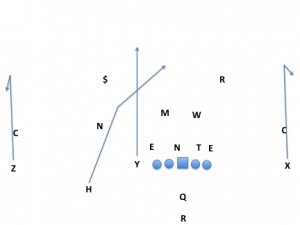 Make Orion Stewart worry about Daje coming into his zone from the other side of the field underneath another vertical route by the Y receiver. Stewart is already going to be eyeing that Y and won’t necessarily be ready to pick up Daje.

At the least, the comeback routes should be available against Baylor’s bump-and-run coverage on the outside if Texas can’t attack the middle and is looking for breathing room in the passing game.

What’s the best way to handle opposing speed? Run the ball at it behind big bodies. Texas needs to run behind big Geoff Swaim all day long. The run/pass POP plays Texas has been running with Swoopes need to be multiple and regular against Baylor to create as much of a horizontal stress on its defenders as possible.

In particular, Texas should run a good amount of lead zone behind Swaim and see if Baylor’s team speed can rally to the ball against his powerful lead blocks while remaining assignment sound against the option.

An example might be to give Swoopes the option to throw a quick slant if Stewart fills aggressively against the run: 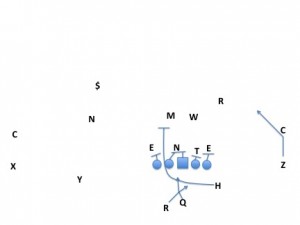 If that Stewart (R) flows hard to the ball, fire the slant past him. If he starts backing up than the backside cut should be available to the running back.

If Texas can conspire ways to use POP plays to throw the ball to Daje on the run, mores the better.

Texas is going to need the OL to make another leap of improvement in this game and they’re going to need Swoopes to make some plays in the passing game to get the Baylor defense to back up off the ball. Kansas played its safeties shallow and we saw how the Texas running game handled that response.

That’s Baylor’s MO, and they are much better at it than Kansas.

It’s hard to see Texas improving enough over the course of the last week to bring the level of execution that will be necessary to play ball-control against such a stifling defensive approach. If Texas could reliably pound the ball on the ground, that’d be the best bet but that trait has as yet eluded a remarkably inexperienced OL.

Texas is just going to have to put the game on Tyrone Swoopes’ shoulders and hope that he’s got a surprise in store for Briles’ Bears.