In the preseason when I wrote up how Texas matched up against Oklahoma St , I noted that UT was at a disadvantage playing this team late in the year when Gundy’s young team was likely to have improved and found a groove.

Indeed, the defensive back seven for Oklahoma State has four underclassman and five new starters after boasting one of the most experienced units in the nation in 2013 and some like FS Jordan Sterns and CB Ramon Richards have come a long ways.

Fortunately for Texas, the Cowboys lost JW Walsh early in the season and were forced to turn to former walk-on Daxx Garman. Whereas Walsh mixed a mediocre to average handling of their spread passing game with great running ability, Garman brings a very different skill set to the offense.

Garman has a strong arm and throws a solid deep ball but the Cowboys have a very inexperienced WR corps and an o-line that hasn’t proven itself to be trustworthy in setting up play-action or adequately protecting the less mobile Garman.

Consequently, OSU does not have a strong identity on offense and their defense hasn’t fully put it together either heading into this matchup.

What’s more, the current forecast in Stillwater says a high of 37 degrees, and the game starts at 6:30pm (CT) so it’s likely to be even colder, with 12 mph winds and a 40% chance of precipitation that might include snow.

Cold weather football games are a different animal. The ball becomes hard and difficult to grip or catch, the ground becomes hard and less pleasant to be smashed into, and the passing game can become trickier to execute.

Cold weather benefits the team that comes with a commitment to bring the pain, endure, and establish their will the old fashioned way. You’d tend to think such a scenario favors the Longhorns, who are hitting an identity running the ball and playing defense, but OSU has had an extra week to prepare for this game as they also chase bowl eligibility so the results should be interesting.

The Cowboys’ season has revolved largely around a struggle to involve their most explosive player, (sound familiar?) Tyreek Hill. The RB/WR hybrid has 677 yards from the line of scrimmage on the year and three TDs as well as a couple of kick return scores.

Gundy has moved him around from week to week with varying success but perhaps his best game was their last contest, against KSU, when he took 18 carries and produced 102 rushing yards. 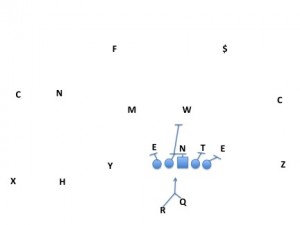 KSU frequently met the OSU offense with a 2-deep coverage shell that featured spread out linebackers that made it hard for the Wildcats to get hats in the box quickly enough to stop Hill, particularly on inside runs like the draw (above).

As threatening as those plays can be, Hill is probably the most effective when releasing out of the backfield on passing routes or when lined up as a slot receiver. As we’ve seen with Texas this season, stopping a running back who’s actually a great receiver out of the backfield can be a serious challenge.

The answer for Hill could be similar to the answer Texas found for stuffing Tech and West Virginia. While the 3-3-5 seems to be Texas’ least popular defensive strategy, it’s actually proven very useful for stuffing Big 12 QBs who rely more on their star receivers.

Texas dropped eight defenders into coverage against West Virginia perhaps as often as 50% of its defensive snaps. It’s a difficult scheme to use for stopping the run since Caleb Bluiett and Naashon Hughes often struggle to make ideal run fills as linebackers, Dylan Haines doesn’t offer a particularly physical presence as a box safety, and Cedric Reed isn’t at his best when playing as a 3-4 DE.

However, Texas can absolutely erase problem receivers from this set and play great “bend don’t break” defense with eight players off the line of scrimmage.

Against West Virginia, Texas utilized a “bear” front from this 3-3-5 that will likely be a scheme that Texas comes back to in the coming years: 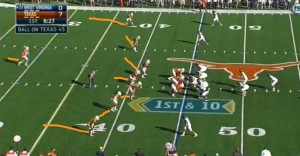 In the bear front, the Texas defensive ends both line up as 4i-tech defensive tackles, the Fox and Mike linebackers play in the c-gaps if there’s a run, and the Will linebacker fills inside. The nickel and drop safety are in charge of forcing outside runs. Meanwhile the corners and deep safety sit on top of everything and prevent big passing plays.

When Texas is in this set, any route that Hill (or another favorite receiver) tries to run can be double teamed underneath and the inside rushing lanes are going to be clogged by the three DL and the will LB. If Hill does happen to slip through somewhere? Texas has athletes like Mykkele Thompson and Quandre Diggs roaming around in the open field to help corral him before he reaches the end zone.

Other than Hill, the main threat from the OSU offense is from Spread-I tactics and their leading receiver, David Glidden, running post routes from the slot. They’re at their best when they can use lead runs with FB/TE Jeremy Seaton leading the way between the tackles and pair it with play-action or POP throws down the field.

The 3-3-5 Bear front could also help Texas handle these issues since it clogs the lanes and makes it difficult for lead runs to find room to operate in the middle. If the Cowboys start attacking the perimeter, Texas can start bringing outside blitzes that transform the 3-3-5 into a 5-2-4: 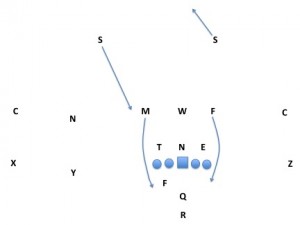 Or they can sit in the 4-2-5 and beat the Cowboys playing more traditional base defense. Texas coverage schemes which drop three pass defenders deep and then play matchup zone underneath are really quite sound against many of the Big 12’s favorite modern tactics.

For Garman and OSU in particular, who are at their best when they can run the ball and throw it deep, Texas’ ability to load the box without compromising its deep coverage, like many quarters-defenses do, is going to be hard to score against.

Checking in on the growth of Texas offense

After the UCLA game I was adamant that Swoopes’ self-pressuring tendencies and lack of feel for the pocket were going to be his undoing as soon as he faced a team that was willing to bring the heat.

OU curiously failed to bring a lot of pressure as Mike Stoops has been collapsing into himself and bringing one lame gameplan after another. Baylor and West Virginia live to bring man pressures and they both had great success against Swoopes and the Texas passing game.

Oklahoma State hangs its hat on playing excellent matchup zone but they do have fire zones and man blitzes in the playbook and you’d be shocked if they didn’t utilize them to attack Swoopes in the midst of a freezing Oklahoma night.

Here’s how Texas attempted to respond to West Virginia loading the box and bringing pressure and how they are likely to respond against OSU doing likewise: 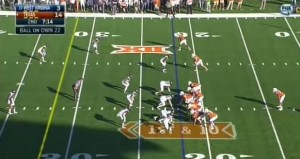 The easiest answer is just to run the dang ball from big formations with only two receivers on the field. Texas showed lead zone, some pin and pull trap plays, traditional power, and power G (pulling the frontside guard) against West Virginia in a veritable smorgasbord of run-game punishment.

The wondrous results of this were plain to see, Gray and Brown combined for 191 yards on 30 carries and Texas was able to dictate the flow of the game from early on.

Texas has been getting great blocking and solid receiving from Geoff Swaim all season but MJ McFarland and Andrew Beck have shown a lot recently as the H-backs in this offense and provided great lead blocking against the Mountaineers. Alex de la Torre had his name called early and often at fullback and also showed growth.

Besides the benefit of being able to run the ball from these bigger sets and knock around Big 12 defenses designed to stop spread attacks, these tactics also provide obvious answers for the blitz.

To begin with, Texas can play max protection with the tight ends and/or fullback staying behind to protect Swoopes. Against OSU’s defensive end Emmanuel Ogbah, a 6-foot-4, 270-pound specimen with nine sacks on the year, this is an advisable strategy rather than leaving the 280-pound Marcus Hutchins or “NCAA” Hughes to try and handle him alone.

Swoopes’ and Watson’s favorite passing concept from this set for attacking pressure is with switch routes like “curl-wheel” for the side of the formation with twin receivers. 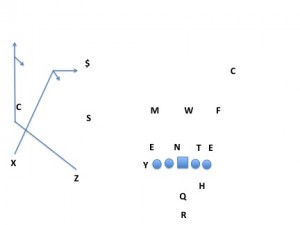 This is the play that Swoopes completed to Shipley against Iowa State at the close of that game and again early on against West Virginia. Later in that game, Ty lost his nerve running this play, began to misread coverages, and threw a pick.

The outside receiver runs a curl route or comes inside looking for grass while the slot receiver runs a wheel route that becomes a comeback if he can’t get behind the defender. It’s a nasty play for opponents to defend if Swoopes and the receivers are all on the same page because Ty has enough arm strength to beat coverage throwing those balls.

However, if he panics under pressure and either misses a throw to the wheel route running deep or throws the comeback when the receiver has a “go deep” read, then this play is great for creating incompletions or interceptions.

If Texas can complete routes like this in the frigid temperatures against the Cowboys, then the game is over and Texas will win big. Running the football for 200 yards would likely have the same effect. Then there’s the simpler way. The easiest way to move the football is to not have to rely on pinpoint throws, QB-WR chemistry, and clean execution of blocking plays that involve multiple moving parts.

The easiest way is just to get the ball in the hands of a fast player in open spaces and let him sort out the remaining details. We’ve seen now that Daje Johnson is healthy. We’ve seen him catch balls. We’ve seen him terrorize defenses on sweeps and outside runs.

It should be the simplest thing in the world to involve Daje and get him touches in Stillwater. If this contest becomes a defensive struggle, there could be big advantages to be found just by getting a couple of explosive plays from the speedster that set up Texas for scores or that flip field position.

If Daje isn’t ready as a receiver, they could put him in the backfield in Texas’ two-back or diamond formations and let him run flares, screens, sweeps, or outside zone plays. If he is ready as a receiver, UT’s various spacing routes underneath can become so much more dangerous when it’s Daje running the route and potentially exploding for a TD after the catch.

Moving back and forth between joining the backfield, motioning out wide to run underneath spacing routes, or even running deep go routes is where Daje’s ultimate potential lies. Where ever he’s at in his journey towards that potential he needs to be the focus of the gameplan this week.

There will be plenty of time to help Swoopes learn and absorb the offense in December bowl practices if Watson will just be willing to lean on Daje this week in order to beat OSU and pick up that crucial, bowl-clinching 6th win.

So hopefully this is the last week we have to say this and Daje is involved in a big way as Texas finishes a fantastic season turnaround and earns a bowl bid: