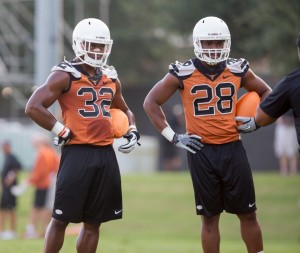 Ideally the pre-conference slate of opponents accomplishes a few things for a football team. It slowly tests and prepares the team for conference play, it provides the team with a win or two that will look good on the resume, and it allows the coaches to firmly establish the team’s identity.

Every team needs identity. When players understand the overall strategy, understand how they fit into it, and understand how it can work they will play with considerably more speed and confidence. The team that understands its identity will practice better, prepare better, and ultimately play much better.

The team that doesn’t know its identity will frequently be lost in questions like “why am I doing this?” and won’t have confidence that their strategies and assignments will bring success against good opponents.

Most Big 12 teams arrive at their identity by settling on a starting quarterback and building around his skills while finding a base defense that they can hang their hats on.

In the close loss against UCLA, Texas began to build a team identity that will provide the beginnings of a strategy for beating Big 12 opponents. So what is that identity and is it strong enough to survive the coming gauntlet?

The offseason vision for this team was to build it around bigger formations with tight ends, pound the ball alternately with Malcolm Brown and Johnathan Gray, and set up David Ash to make plays in the passing game that carried drives and put points on the board.

That identity is now gone.

So, the team is developing an identity now around three things that they can do well: The quick passing game, QB rollouts, and the lead zone running play.

Lead zone was a play that Texas ran only a few times against UCLA but to great effect and it arguably maximizes what this Texas running game is best at right now: 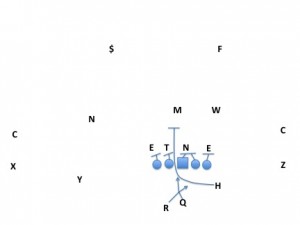 This is the “boundary G” concept that Coach V broke down when Wickline is hired. It’s an “Iso” type play that relies on zone blocking techniques with split flow by the OL and a lead blocker inserted in the middle. In the version ran against UCLA, the running back is handed the ball against the flow of the H-back’s block and reads the weakside linebacker.

Swaim cuts upfield between the zone blocks and targets the middle linebacker. If the weakside linebacker looks to help fill behind the mike linebacker then the RB can run at the edge.

If the weakside linebacker stays home, then the RB just runs behind Swaim’s lead block.

What makes this play great for Texas right now is that it takes advantage of the vision of the Longhorn RBs, the brilliant blocking of Swaim, and it puts the OL in match-ups they can control. For the line, they don’t have to worry about reaching up to the linebackers and they don’t have to worry about driving the DL off the ball. All they have to do is seal open the lanes and Swaim and the backs do the rest.

To help the rest of the run game, Texas has also been running a lot of packaged plays, particularly a power/slant combination that Swoopes has been very good with and a QB power/RB screen play that Texas did not use very effectively. The idea on these plays is to combine a base running play with a simple passing concept and allowing Swoopes to either hand off or make a one-read throw.

The power/slant combo you saw Swoopes complete maybe ten times against UCLA is going to be very difficult for opponents to stop and represents the future of the offense as Watson expands on the concepts and hopefully integrates Daje Johnson into the mix: 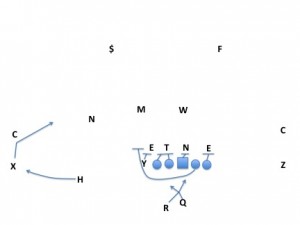 For this play, Swoopes begins by counting defenders in the box and handing off if the run game has favorable numbers. Like with lead zone, the RB starts by aiming for the cutback, which he can run through if the linebackers overplay the block by the pulling guard. If they don’t, he follows his lead blocker.

If the defense loads the box, Swoopes reads the flat defender. Does he chase the slot receiver on the out route? Throw the slant. Does he stay home to take away the throwing lane on the slant? Throw the quick out.

UCLA did all they could to stop this play and started blitzing the run and attempting to take away the slant but you can see Swoopes complete the throw against a blitz backed by man coverage regardless. He’s throwing laser beams on this play and it’s simply a difficult match-up for the defense.

The plays that give Swoopes a run-read are not being executed very effectively right now and Ty is clearly much more comfortable and capable punishing defenses with his arm rather than his legs.

Unfortunately there are a few problems for this identity: first of all, there’s not enough here to form a game plan that good defenses won’t be able to stop. While Texas has some plays here that are very hard for a defense shut down, the ‘horns don’t have very many of them and none of them are particularly explosive. What’s worse, the better defenses will key in on Texas’ favorite plays and have their defenders well drilled in how to stop each play in this arsenal.

Watson and Wickline will have to continue to adapt and develop these plays every week just to tread water or else teams will match-up these concepts in their base defense and wait for Texas drives to stall due to a mistake or a good defensive play.

It’s very hard for an offense to drive the length of the field on plays that aren’t designed to make huge gains against a defense that knows they’re coming.

The next problem is that Texas doesn’t have very good answers for the blitz. While Swoopes can be devastating on the move or on quick reads, he does not yet have good pocket awareness or footwork. If you blitz him off the edge you can potentially tip his quick passes or force him to make a play by stepping up in the pocket, which he’s not comfortable doing.

The OL’s ability to pass protect is somewhat suspect in general. Perkins is struggling to handle good edge rushers and the whole unit is still too young to be expected to be good at identifying and picking up every blitz that they’re likely to see. Future opponents are going to zero in on this personnel and attack weak spots with what would appear to be reckless aggression against a more seasoned offense.

Finally, Texas simply isn’t very good at running the football, which makes it hard to protect the OL from blitzes and hard to set up play-action deep shots.

Right now, Texas’ offensive identity is still one that is growing and developing and it does not yet provide Watson for answers against all the defensive responses that Texas will see from Big 12 opponents.

There are three possible solutions that could allow Texas to make a leap of improvement and have a fighting chance against their upcoming opponents. First would be the return of Daje Johnson.

Daje can turn some of the runs and quick throws that the offense is already becoming comfortable with into potential home run plays that either score or turn an otherwise “meh” drive into one that puts Swoopes in the red zone.

The second is just continued improvement by Swoopes and the OL that allows the playbook to open up more and gives Watson more answers for the blitz or a patient defense.

Finally, there’s the run game. If Texas utilizes more lead zone plays and can start to avoid tackles for loss and make more consistent gains on the ground then the play action game can open up and defenses will struggle to control both the quick passing game and the inside running game.

With Diggs over the slot and Thompson and Thomas outside at corner, Bedford can funnel the passing game inside to a more manageable amount of space and force offenses to make their living throwing short, horizontal passes while Hall and Colbert sit on the deep hash marks.

Texas gave up a lot of dink and dunk yardage playing these tactics and watching as UCLA hammered the edges with screens or the middle with runs but the Bruins weren’t able to land any kill shots against this look. The big UCLA plays came when Duke Thomas bit on a play fake and when Hicks missed his gap on a corner blitz, mistakes that Texas can hopefully clean up in conference play.

The blitzes in Texas’ arsenal are also very solid as Edmond and Hicks are very explosive pass-rushers, the DL is loaded with athletes, some of the DBs can blitz, and Shiro Davis is one of the best coverage DE’s I’ve ever seen.

The challenges for the Texas defensive identity revolve around the play in the middle of the field. Texas’ starting safeties in the nickel package are a redshirt sophomore and a true freshman while the middle linebacker in front of them is inconsistent and not always lightning quick on his reads.

Opponents are going to use a lot of option and run/pass conflict concepts to attack these players and they’re all going to have to grow up quick to avoid giving up the kind of big plays that will ruin Strong’s strategy.

Hall has some star potential and Colbert has been fairly steady for a young starter so there’s some potential here for this tandem to grow over the course of the year and potentially be very good in 2015. They’re going to get beat up a few times in 2014 while they figure that out, even though Texas’ CBs can allow them to take on easier assignments.

Another challenge up the middle is the loss of Tank Jackson. Texas is going to need to find some nose tackles who can force double teams so that Malcom Brown can continue his work as a havoc-wreaking three-technique. If Texas’ nose tackles can’t command double teams then opposing OL will be able to release upfield against Edmond and you can be sure the Longhorn mike linebacker isn’t going to attack the line of scrimmage quickly enough to meet them.

Against opponents that don’t run the option, Texas is going to play good defense in 2014. If the middle of the defensive backfield makes some leaps in football knowledge it’s possible that Texas will play good defense against option looks as well.

This probably isn’t a dominating unit but it is one that can keep Texas in the game against most opponents.

That Texas is starting to build an identity around some very effective offensive tactics is encouraging given that the QB barely played before the BYU game and the OL was fashioned out of spare parts.

The next few teams on the schedule are going to zero in on Swoopes’ weaknesses in the pocket and the struggles of the OL to handle the blitz so things are likely to get worse again before they get better.

That said, there’s enough on defense and potentially enough firepower and skill on offense that Texas might manage to beat a favorite and even reach bowl eligibility. There could be glimmers of hope this season for a not-too-distant future in which Texas is back on top.