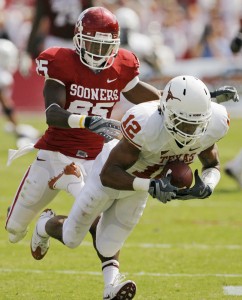 The 2008 Red River Shootout was the second of three consecutive I attended. It was easily the most exciting and rewarding live game I’ve attended in any sport. Because of the scarring that had resulted from five consecutive defeats to Bob Stoops’ Sooners, there wasn’t a ton of confidence going into any of these games even though Texas ended up finishing 3-1 against OU during the Colt McCoy era.

Texas gave the Sooners a good fight in ‘07 before folding late due to various mistakes, and while the ‘08 Longhorns appeared to be an improved team, the ‘08 Sooners looked like one of the best teams yet from Bob and unquestionably the best since 2004, the last game in their five-game winning streak in this rivalry.

Let’s set the stage a bit.