We’ve now examined the foundation of the Herman offense, which is the power and inside zone run game, as well as the basics of the Todd Orlando defense, which are the coverages he uses to structure his schemes. Now it’s time to dive into the Herman passing game.

This is undoubtedly going to be subject of great interest in the upcoming season, particularly if Shane Buechele remains the starter, because while the Herman and Gilbert run games were very similar their approaches to the passing game are wildly different. The Veer and Shoot passing game is unique to college football in that it’s almost entirely married to the run game. The mistake made by countless opposing defenses going against it has been to treat the Veer and Shoot passing game as being “built off the run game” but in reality the run game is built off the threat of the vertical passing game.

Good Veer and Shoot teams will burn you deep all day long, fearlessly and ruthlessly, until you find coverage solutions that prevent them from doing so. After you’ve made whatever compromises are needed to avoid getting gashed deep, then they go to work with the run game or screen passes to pick apart whatever areas across the defense have been left bare by the solution that prevents the deep shot.

A misunderstanding of what the Veer and Shoot offense was intended to do existed within the Texas media perhaps to an even greater extent then amongst the defensive coaches Texas faced in 2016 who’d been learning painful lessons about the scheme from facing Baylor over the years. The main problem with the 2016 Texas passing game was not “a failure to attack the middle of the field” but rather an inability to take what the defense was conceding.

Here’s the 2016 Texas passing game in a nutshell:

All of the WRs are lined up well outside of the hash marks and they’re all facing off-man coverage. Kansas is in cover 1 but you’ll notice that their deep safety is pretty trigger happy against the run. So the Jayhawks have six in the box with an extra man against the run plus the quickly arriving deep safety. This was more or less the gameplan of every successful Texas opponent.

Now where is Texas at advantage? It’s not in the middle of the field, the DBs playing on the slots are playing with inside leverage and there’s a middle of the field safety and two linebackers between the hash marks to boot. The advantage for Texas is in the 1-on-1 matchups on the outside, IF they could exploit them. Because of protection issues (presumably), Texas didn’t take as many deep shots at off coverage which would have required double moves to guarantee success, instead generally contented themselves with throwing quick routes underneath and hoping they could break a tackle or move the chains with incremental gains.

Or just as likely, they’d hand off to Foreman and watching him beat numerical advantages by virtue of being a well-balanced, 250 pound athlete running behind a future 1st round NFL left tackle.

This is not how the Herman passing game will work, it’s a system that can work independently of the power/inside zone run game.

The goal with Herman’s passing game is to attack defenses, in space, with athletes when advantages can be found. This may be done in order to exploit run-stopping defensive personnel, to exploit deficient pass-defending personnel, or just to involve skill athletes. It’s not designed strictly to constrain the defense from stopping the run although it can serve in that purpose.

Here are three of the pass game concepts that Herman utilizes which demonstrate the broader goal of his passing game construct.

This is a two-man concept that reveals the way this passing game tends to work. The QB is reading the weakside linebacker and how he responds to the “pivot” or “whip” route. If that LB chases that slot receiver back outside, he vacates the passing window to the dig route, if he doesn’t then he leaves open a passing window to throw to the whip route in the flat. It’s a simple read for the QB and makes for an easy ball control concept. 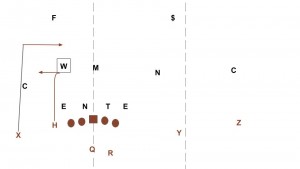 Herman’s passing game relies on simple movement keys where the QB is reading defenders for leverage and then firing the ball into windows that the WRs need to be occupying. He may read multiple defenders before delivering the ball but things are generally pretty straightforward and simple.

Here’s a combination that Texas technically had in the Strong playbook in the pre-Gilbert years but rarely utilized because they were so horrible at throwing the ball. This one is useful for beating multiple types of coverage but it’s popular because it can be used to attack “2-read” or “cover 2” which are otherwise hard for a college passing game to beat.

Here I’ve drawn it opposite of “follow-pivot” as an alternative concept for the QB to use if the defense is playing a coverage unfavorable to completing the dig route: 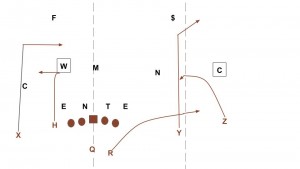 If there are two deep safeties the QB can read the corner and either throw the flat route (to the RB in this case) or the corner route (to the slot) based on whether that corner sinks deep or matches the flat. The slot is being counted on to get open against the safety. Meanwhile the outside receiver is running the “snag” route, which is like a shallow curl route that’s designed to hunt for space between the nickel and the corner. If the cornerback drops to take away the deep route by the slot then the QB is reading the nickel to determine whether to throw the “snag” or the flat route.

At Houston they taught Demarcus Ayers to run the corner and the flat route and would use this concept either to get him open in the corner of the end zone or out in space in the flat to attack opponents.

It’s ironic that this concept is named after a city who’s major university Herman wasn’t coaching when it came into existence. “Houston” is a favored way to attack quarters and it does so by combining a seam-read route by the slot with the traditional curl-flat combo: 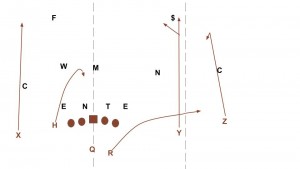 The deep choice route by the slot should draw in the deep safety and then it’s a simple read of the nickel to see if he chases the flat route and leaves the passing window to the curl route open or not. So the QB will check to see if the slot can get open deep and then make the simple curl-flat read on the outside.

These aren’t the only concepts that Herman has utilized but they tend to come up a lot and they are indicative of the kinds of plays that he’s tended to utilize in the past.

As I’ve already noted, the goal here isn’t to create maximal stress on the defense for how they play the run game. The goal is to have tactics for attacking different defenders in different ways with skill athletes. It’s a more flexible system than the Veer and Shoot but it isn’t close to as effective for landing haymakers unless you have star athletes executing the plays at a high level.

The nature of the reads puts a lot of onus on the receivers to be in the right spots at the right time. It’s all designed to make things as straightforward as possible for the QB, after all he’s got a lot on his plate with the RPOs and run game and it’s not a great idea to design your offense around requiring high level proficiency in a complex run game and pass game from your signal-caller.

Normally Herman would like to make the reads simple by utilizing four-wide or empty formations when he wants to attack opponents with the passing game but with Cardale Jones in the playoffs and then with Ward Jr and the shaky Houston OL, that wasn’t as effective an option. Instead, Herman adapted many of his concepts to work with max protection or play-action rather than empty sets.

At Texas I think we’ll see him use empty sets due to the abundance of WR talent, the likely improving play up front with Connor Williams returning, and the cast of potential right tackles increasing.

Texas may also see a heavy focus on this passing system over the course of the offseason as Herman takes stock of the positive state of the Texas run game situation (provided they find a good featured runner) and contrasts it with the abundant passing game talent that exists within Buechele and this WR corps but relative inexperience with his system.

Texas’ highest ceiling in 2017 is almost certainly coming as a result of Shane Buechele, Collin Johnson, Devin Duvernay, Armanti Foreman, Jerrod Heard, Lorenzo Joe, and John Burt pooling their prodigious talent into a Texas passing game that can overmatch Big 12 secondaries. A Texas offense that can regularly turn to empty formations and force defenses to determine whether they would rather double Collin Johnson on a curl route, Jerrod Heard on a seam read, or Devin Duvernay on a quick route into space is one that could do a lot of damage.

No doubt we’ll all be putting our ears to the ground for a dozen different things come spring but the mastery of the Texas passing game could be the one that has the biggest impact on the inaugural Herman season.

Want all Inside Texas has to offer from Justin, Eric, Ian, Scipio, Tim, Joe, and more? Click Below!