Charlie Strong has been gifted an extraordinary opportunity in Waco next Saturday. The game is largely inconsequential for anything except sheer pride, basically like an early bowl game, but the Longhorns could earn a lot of respect and build some momentum if they were to win this grudge match with Baylor to close out the season.

The Bears are coming off a tough overtime loss in Fort Worth that cost them a chance at a third consecutive Big 12 title. In that game, third string QB Chris Johnson showed some serious flaws in a 7-of-24 passing performance with 62 yards, a TD, and a bad interception (thrown into double coverage). At 6’5” 225 with wheels, he’s normally more of a threat on the ground but God sent a plague of rain and frogs upon Baylor that held him to 13 yards on 15 carries.

For its part, Texas has just a touch of momentum owed to the fact that Chris Warren III is now healthy and fresh off a spectacular break out game against Tech’s woeful defense while the Longhorn defense should welcome back some injured starters like Malik Jefferson in this final contest.

I know everyone would prefer to talk coaching shakeouts and potential OC hires, but a victory over the Bears after an offseason of bitter trash talk and several ringing defeats to Briles’ squads would put Texas at 2-0 for the year against its current two fiercest rivals. Here’s how that could happen:

What seemed an impossible task earlier in the year has been made oh so possible due to injuries to the Baylor QBs and the revelation of a few cracks in the Bears’ armor.

With Johnson at the helm, there are increasing options for stopping the Bears owing to the fact that the 3rd-stringer is apparently less adept at reading coverages and certainly less accurate than either Jarrett Stidham or Seth Russell.

The main play that has to be accounted for is the same tackle-lead play with pass-options attached that I warned about against Tech. The difference here is that Baylor will use this play to try and get Coleman in a 1-on-1 match-up outside and that pulling tackle Spencer Drango is even better than Le’Raven Clark. 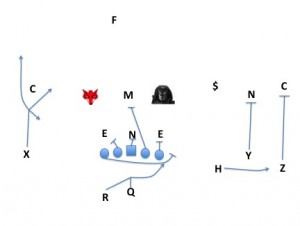 OU was able to stop this play because Charles Walker and the ILBs dominated the right side of the Baylor line and the Bears’ RT wasn’t good enough as a lead blocker to run it to the other side of the formation.

The other key was the Sooners playing man coverage on everyone but Coleman and shading the deep safety to his side of the field. Texas has the personnel to completely mime this strategy up front but they might as well play it even more aggressively and hope to get the Bears in passing downs by unleashing the Predator off the edge regularly: 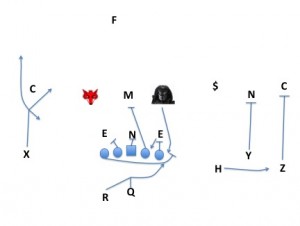 This stunt would form a traditional 4-3 Under defense with Hughes becoming the mike LB, Wheeler the will LB, Malik the weakside DE, and that field-side end (Ford or Ridgeway) the three-technique defensive tackle.

The difficulty in matching the Sooners’ strategies for containing Baylor lie in the limitations of Texas’ personnel grouping, namely at safety.

Against the Red Raiders, Vance busted out a lineup that featured Duke Thomas at safety and John Bonney at nickel, a brilliant move that allowed the Longhorns to get four man-coverage players on the field without having to sub-out a linebacker. That package would be immensely helpful again this week with Thomas in the strong safety spot on that diagram and Bonney in the nickel.

The challenge is fielding a safety that could be trusted to shade help over towards Coleman (isolated on the left) and reliably make tackles if and when the Bears’ running game slipped through the box.

Dylan Haines is the obvious choice since he’s generally pretty good about making the tackle on long runs, even if he doesn’t make it where or how you’d hope, and he’s very good at positioning to take away passes as a deep safety. Jason Hall is a less reliable open field tackler and slightly weaker deep defender while PJ Locke and DeShon Elliott are pretty young and inexperienced to have that much on their grocery list.

Another tactic the Longhorns are likely to mix in to help ameliorate these personnel weaknesses and to confuse Johnson are their trap-2 fire zone blitzes. 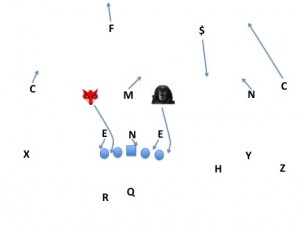 Against this set, Texas could blitz both Malik and Hughes, drop a safety and corner deep, and then play the remaining DBs and Wheeler in a four-under zone. This was a frequent blitz tactic against the Cal Bears that went awry at times due to poor safety play both over the top and in run support…but Texas should be improved since that sad day.

The benefit is that Texas can bring five, get favorable pass-rushing match-ups for Ridgeway, Hughes, and Malik, and still have two safeties over the top to help clean up mistakes. You’d have to give good odds on Texas getting some sacks throwing overload blitzes at Baylor’s right side.

The main question here is whether Texas’ young DBs are ready to implement this scheme. When Vance mentioned Davante Davis struggling with something like reading two to one he’s talking about teaching them zone coverage responsibilities rather than straightforward man. Have the freshman corners figured it out?

Between those two types of aggressive tactics, Texas should be able to get some pressure on Johnson and perhaps even convince him to throw them the ball. The Bears will still probably score some, but there’s no reason Texas can’t keep them within striking distance.

Ironically it’ll be this facet of the game that likely proves most difficulty for Texas given all of the Bears’ struggles on offense to replace Seth Russell. With or without Jerrod Heard (and it’ll be without), Texas knows their identity now is as a shotgun/pistol, 21 personnel team much like the 2014 Oklahoma Sooners.

With Caleb Bluiett on the edge, De La Torre leading into the hole, and Warren toting the rock the Longhorns still have a smashmouth offensive attack despite all of their injuries. Texas ran power and outside zone very effectively from these sets for both Tyrone Swoopes and Warren against the Red Raiders and may have something here that will translate against Baylor’s defense. 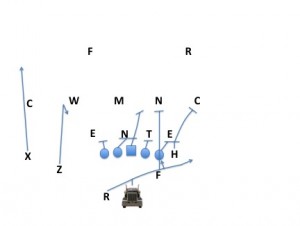 If they stack the fullback and TE to the wide side of the field with twin receivers opposite, they get to run outside zone downhill on Baylor’s field corner (Ryan Reid 5’11” 190), nickel (Travon Blanchard (6’2” 205), right end Jamal Palmer (6’3” 250), and facing Orion Stewart as the only Baylor play-side defender who’s not liable to end the play with a blocker on top of him.

Bluiett and the right tackle would combo Palmer before releasing one of them up to the nickel or corner and De La Torre would take on whichever DB wasn’t victimized by the combo block. The only challenge is the double team on the nose tackle, Andrew Billings who’s probably the best DT in the conference, and getting the center upfield to the middle linebacker.

However, even if Texas struggles to reach the middle linebacker, the most likely outcome of this play is Warren running outside where he can’t reach it anyways, and Texas can mix in counters, zone reads, and inside zone slice plays to the other side of the formation to keep the Bear LBs from flowing too quickly to the football.

Texas has seen a fair amount of success running the ball on BU with sets like this over the last two years as the Bears simply aren’t built to stand up to double teams and fullbacks leading the way on the edge.

The difficulty has been in doing enough damage with explosive plays to get points on the board and match Baylor’s own offensive output. With Swoopes at the helm, there sadly isn’t a great deal of hope for this happening, as it would require landing some shots in the passing game. However, with play-action and twin receiver sets to the boundary like in the diagram above it wouldn’t be difficult for Texas to isolate Burt on the Bears’ boundary corner on deep routes.

Perhaps they could even catch the Bears napping with a wheel route off play-action: 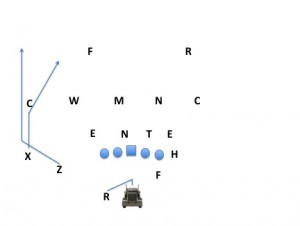 It’d be child’s play to run lots of bubble routes to the backside while running zone or power to the field and then having the bubble turn into a wheel-sluggo combination that could spring the slot receiver deep with no one around.

Of course the problem for Texas hasn’t really been finding ways to get John Burt or Daje Johnson open downfield, it’s been connecting with them after they get open. Don’t be shocked to see something like that come up. If Texas can land some shots in the passing game and get on the board early in the game, then they’ll be able to run the ball enough to soften the Bears defense and have a chance at getting some explosive runs in the second half.

A victory over the Bears, with Swoopes at the helm, in Waco, in the midst of a 4-7 season would be like a drink of cool water on an August Austin day sitting in traffic on I-35. It’d give recruiting a boost, give the players some confidence and momentum going into offseason drills, and it’d go a long ways towards putting Briles’ uppity bunch back in their place.

Those would be some positive outcomes worth rooting for in the midst of this season.