So Texas has settled on Sterlin Gilbert as the OC to lead the UT offense out of the wilderness and into the promised land of shootout victories and 1st Team All-Conference quarterback play.

As you surely know, Gilbert comes from the Art Briles school of offense, having learned the “veer and shoot” system as a GA under Briles at Houston before later working under other Briles disciples Dino Babers (Eastern Illinois and Bowling Green) and then Phillip Montgomery (Tulsa). He now brings his particular style of Briles-ball to the University of Texas.

At its heart, this system is arguably the purest form of spread offense in the game. The formations, concepts, and philosophy are all geared around forcing the opponent to defend the entire field on every single snap. It’s the triple-option with spacing and the forward pass integrated as ways to create conflict for the defense and the nature of the system is to give the QB multiple options and teach him how to always make the defense wrong.

Gilbert has some solid experience running this offense away from Briles and was even largely responsible for installing it on behalf of Dino Babers at Eastern Illinois and again at Bowling Green. There’s no question he understands the system and how to make it go, the question is whether he can do so at Texas for 2016.

The Gilbert variety of the veer and shoot

Briles’ offense at Baylor has often varied based on who the QB is, sometimes emphasizing RPOs (run/pass option plays) or true QB option more and other times being more about the passing game, depending on the skills of the QB and surrounding talent.

For Gilbert, the offense has generally been more about the passing game and has even more closely resembled an Air Raid at times but with wider splits in keeping with the Briles tradition.

At Eastern Illinois, Gilbert and Babers inherited Jimmy Garoppolo (who is now the New England Patriots’ backup QB) who was a junior and returning starter coming off a very respectable season. Garoppolo has a lightning quick release, prototypical NFL size, a strong arm, and the spacing of Gilbert’s offense absolutely unleashed these skills.

As a sophomore pre-Gilbert, Garoppolo threw for 2644 yards, 7.6 ypa, and 20 TDs to 14 interceptions. As a junior in Year 1 with Gilbert he threw for 3823 yards, 7.1 ypa, 31 TDs and 15 interceptions. In Year 2, with a mastery of the system those numbers spiked to 5050 yards, 8.9 ypa, 53 TDs and only nine interceptions. Texas has never seen someone fling the ball around like that in the history of the program.

At Tulsa there was a similar transformation for returning starter Dane Evans who threw for 3102 yards, 6.7 ypa, 23 TDs and 17 interceptions in 2014 before Gilbert came. He went for 3958 yards, 8.9 ypa, and 22 TDs with just eight interceptions after he arrived.

Make no mistake, this system is designed for the QB to give him clearer reads, better options, and open receivers.

Here’s how it works, it’s largely RPO-based with a few key run plays emphasized every week and combined with basic quick game concepts on the outside and a few play-action strikes. The goal is to force the defense to defend everything every play or risk getting ripped apart by paper cuts that end up looking more like machete slashes thanks to the spacing of the offense.

The pace is fast and ideally the QB has command of the offense and can just line up and make calls and decisions on his own, much like a point guard calling for screens and then adjusting on the fly to what the defense is doing.

At Tulsa, Gilbert and his OL coach, Matt Mattox who played for Briles at Houston and is now joining the staff as well (OL), inherited a line that was hardly a group you’d want to build a dominant run game around. They were basically a rag tag bunch of Okies (with a single Texan) that looked like this: 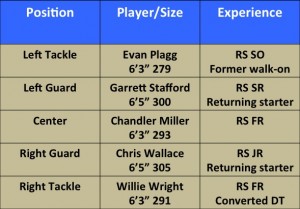 Basically both tackles were Marcus Hutchins and there was little size or meaningful experience anywhere except at guard. But that hardly mattered, because the design of the system is such that they’re usually only prominently involved on a play when the defense presents an under-manned front against the run or the QB is throwing deep off play-action. It’s probably the easiest offense to play OL for in all of college football.

They ran a lot of inside zone or tackle-lead on plays that looked like this: 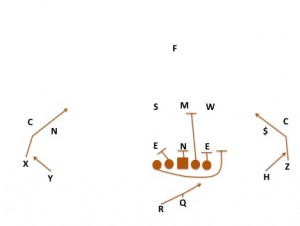 It’s up to the QB to decide how to proceed here but he has three options to choose from. His first decision is whether to throw or pass, based on the numbers that OU presents in the box. The Sooners play man coverage across the board with six defenders in the box to deal with five blockers so that leaves Evans with the obvious decision to throw.

Gilbert has a man coverage beater attached on both sides, a sort of Briles-ball version of the slant-flat combination in which the slot receiver crosses under outside receiver and turns around for the ball like on a bubble screen. In adjusting to stop the bubble, the defense typically gives up leverage and allows the outside receiver to run open for a slant. In this instance Tulsa opted for the slant to the field and picked up about 13 yards on the play.

This is the more spread, Air Raid side of the offense. Then there’s the more veer and shoot elements of the system, which often employ a TE or H-back and more play-action or vertical shots.

These sets still involve wide splits and quick pass options on the outside for all of the runs but the run game is more diverse thanks to the extra blocker and there are more of the frequent deep shots everyone associates with this offense coming off true runs or play-action fakes.

Because the offense is forcing the defense to defend every thing on every play with wide spacing and run-pass options on every call, many teams will end up playing man coverage across the board or getting in a situation where someone slow is responsible for covering someone fast on a deep pass. That’s when they pounce, and sometimes they’ll run a play where the receivers that aren’t involved don’t even really bother to run a true route while the QB looks to go deep on the chosen target who is frequently just running into open grass against his victim. 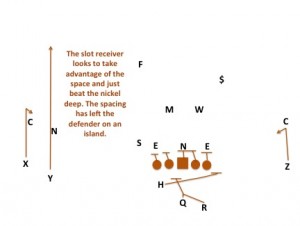 The fit at Texas

The nature of this offense is designed to set up everyone on the roster for easy success and coaches will usually just look for a few key skills in the players since the triple-option aspect of the system basically turns players into cogs in a machine.

The receivers are ideally pure burners who are spending a lot of time just running past people and this offense had made a lot out of athletes that lack great change of direction but are brilliant in a straight line. They do need to be willing blockers as bubble screens are a massive component to the offense.

The running backs are almost always running between the tackles on undermanned fronts so adherents of this offense have generally gone for bigger, power backs that love to run through arm tackles from late-arriving DBs.

The offensive line is usually either blocking at angles or getting in the way so size and power are key but the system can emphasize whatever style of run schemes the line can execute well when at advantage. There’s usually a TE involved and he’s a pure blocker that rarely has to do much in the way of receiving save for POP passes in the red zone.

Finally there’s the QB, who needs to understand the system and the defenses he will face so that he can choose from his options correctly and make the right decisions with the ball. Also importantly, he needs to be able to lead a receiver on a deep ball and to make quick throws outside of the hash marks with accuracy and velocity. Just take a look at how wide the targets are on a simple hitch, slant, screen, or curl route: 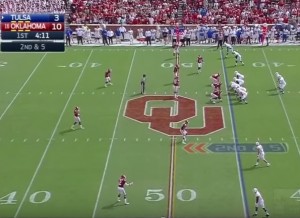 A noodle-armed QB, however accurate, will get picked off or set his receivers up for nasty hits trying to lob the ball outside in this offense. An inaccurate passer will get his team behind the chains by missing throws that the defense can force an offense to hit in order to function.

Having the right player at QB is a non-negotiable aspect of this offense.

There is no outlet to just “emphasize the run” if the QB can’t execute the pass options on the outside as defenses will simply cheat to get their linebackers in the box to mess up the numbers and dare the offense to consistently execute throws outside on undermanned coverage.

Many teams have had some success slowing down Baylor by bringing linebackers into the box late and daring the Bear QBs to make the right post-snap reads and be efficient enough throwing bubble screens and hitch routes on deep safeties to sustain drives. In fact, Iowa State tried this strategy on Texas last year and shut ‘em out.

Here’s the good news; first of all the Texas offense has an OL and skill talent that can do obscene damage in this offense if Gilbert and his staff can develop a QB and get this system installed in a single offseason. John Burt would be a nightmare for opponents in this offense while receivers like Armanti Foreman and Lorenzo Joe are liable to come alive facing man coverage in wide open space all day against opposing teams’ second and third best DBs.

The OL and run game in particular is likely to be a hammer with big D’Onta Foreman and Chris Warren alternating in and plowing through frozen linebackers. What’s more, no opposing defense wants to face Connor Williams, Kent Perkins, or Patrick Vahe next season without sending extra help into the box.

The second item of good news is that Gilbert will have five and possibly six QBs to choose from in the spring to make this work. However, he needs to wheedle his choices down quickly because with all of the options in this offense and the disguises that Big 12 defenses have developed for attacking it the Texas QB needs to get as many reps and looks in this system as possible.

If Locksley and Heard are slow to make the throws accurately or to see the field clearly, they need to be moved aside or to WR so that Shane Buechele, Matt Merrick, and hopefully a JUCO can show their wares. The good news is that this offense has produced 4k yard passers out of lower-rated QBs before, but they have to have the right tools and time in the system for that to happen.

The staff will have to figure out who has the capacity and the tools to make this system work and then develop them as though their jobs are on the line, because they are.

Welcome to the 40 Acres, Sterlin, best of luck.