It’s really only a matter of time before Malik Jefferson begins to play a major role within the Texas defense. Given Dalton Santos’ current status in rehab, the other inside linebackers on the roster, and how quickly Malik has acclimated to college life, it seems that this will be sooner than later.

Malik has an absurd collection of talents that have rarely been seen at the college level, which is important because it can be hard for linebackers to dominate today’s spread-option oriented game without having diverse skill sets. Spread offenses like to zero in on coverage matchups and attack linebackers in the middle of the field with run or pass conflicts. The spacing of the modern game requires a mix of athleticism, physicality, and processing speed from linebackers that want to be playmakers.

Many teams settle for guys that are merely competent at multiple tasks with the hope of driving down efficiency for offenses trying to isolate and attack them.

But then there are the special talents that offenses don’t particularly want to isolate and attack. Linebackers like Darron Lee at Ohio State, who allow the defense to punish the offense for spacing them out, are increasingly common amongst the better anti-spread defenses in football today.

Malik has the athleticism to be that kind of talent, a player that Texas can dare opponents to come after, a player that can free up teammates, and a player that UT can feature as a weapon for attacking an offense.

Here’s how the defense can be built around Malik in 2015 and beyond:

Malik initially wanted to go somewhere that was going to put him at outside linebacker where he could abuse opponents by blitzing the edge. Texas has a grander vision than that for how to make use of his talents, but it’d also be a waste to never use Malik’s explosive power and speed to get after the QB.

Malik might very well be the best pass-rusher on the team already, so Texas is going to want to make use of “the Jefferson package” to get him into opposing backfields.

Texas’ 3-3 Under fronts routinely blitz the middle linebacker into various gaps and Charlie also likes to make heavy use of the classic inside linebacker “cross-fire” type blitz that floods the A-gaps with big, physical athletes. 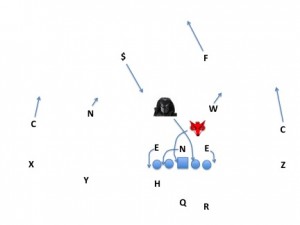 With Ridgeway, Malik, and a fox backer or weakside linebacker blasting through the interior gaps, opposing OL are going to have nightmares. What’s more, that’s a play that Texas can run regularly on standard downs.

However, Malik will be at his best screaming off the edge and it’d be valuable if the Jefferson package included a few pages of plays where he has a chance to line up wide and just get after teams.

For instance, Texas could treat Baylor or TCU’s empty formations with a 2-3-6 dime package designed to get a four-man rush the likes of which Art Briles has not frequently faced: 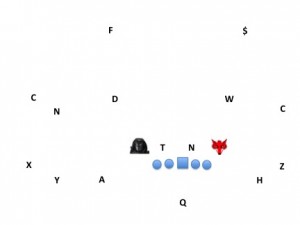 Texas could be as simple as playing two deep safeties with man coverage underneath and use DeShon Elliott or the next best DB as the dimeback with the best coverage linebacker lined up to the boundary. There’d be no easy, quick throws against that lineup and you’d really want to be able to make a quick, easy throw if the DL included Malik on one end, Poona Ford at tackle, Ridgeway at the nose, and then the best pass-rushing end at Fox.

Malik is the perfect anti-spread weapon and that’ll become clear if he’s routinely put in positions to attack the edge against Big 12 passing games. Texas should be able to do this regularly from the middle linebacker position, but Malik may justify a passing down package designed to get the most from his speed.

There also exists a lot of opportunity for using Malik’s unique athleticism to play different coverages.

Typically cover 3 defenses like to handle spread formations by covering the outside receivers and most dangerous slot receiver with the corners and nickel and then dropping the safety to cover the fourth receiver.

So against a 2×2 formation (two receivers to either side), the boundary safety is going to be the one to drop down and cover a receiver: 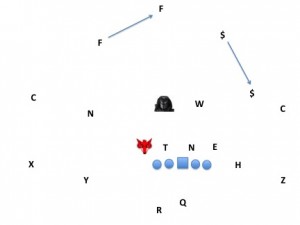 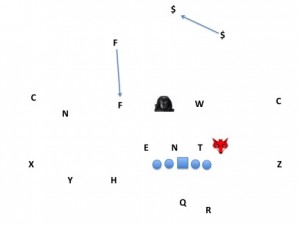 Of these two coverages, defenses like Strong’s usually prefer to be in the one that drops down the boundary safety for a few reasons. One, the field safety is usually more of a cover safety while teams will stick their bigger, box safety on the boundary where he’s working in less space and will have more opportunity to play the run.

Another reason is that the defense is somewhat vulnerable to boundary-side runs when they drop the boundary safety into the deep middle. In that defense, the corner is primarily concerned with preventing the receiver from beating him deep, the weakside linebacker has to force runs inside, and the boundary safety is lined up too deep to arrive in run support quickly.

Offenses love to attack this defense by motioning a player from the boundary to the field, triggering the safeties to switch roles, and then run at the boundary side: 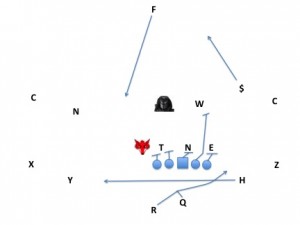 Watch Oregon vs Ohio State and you’ll see the Buckeyes abuse the Ducks like this over and over and over again in the 2nd half. The corner is in bad position, the weakside linebacker has to adjust to being a force defender on the fly, and the deep safety who could erase mistakes is backpedaling at the snap.

It’s difficult for the defense to get numbers to the point of attack on boundary runs in this scheme but it’s a necessary adjustment for most defenses in order to avoid getting shredded by the passing game.

But at Texas, if the middle linebacker position is going to be filled by a 240-pound dude that can run like a cornerback, there exists other possibilities that simply shift coverage burden to the linebacker.

Malik needs to learn to use his eyes and play coverage techniques, but the needed athletic ability is already there. So when teams bring that kind of motion or if Texas just wants to keep the boundary safety in the box, they could allow Malik to widen out as though he was an extra box safety on the field: 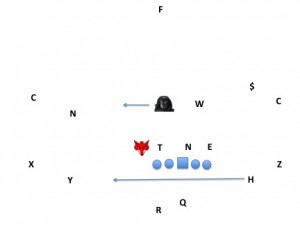 You want to run to the boundary now with the boundary safety still sitting there and forcing runs inside to the weakside linebacker? No, you do not. You’re going to have to hope that your slot receiver is a match-up problem for Malik instead and throw the ball.

Having a Roy Williams-at-OU-type athlete at middle linebacker opens up a wide world of possibilities for the defense in coverage as Malik learns techniques and skills that will allow him to handle slot receivers. The number of blitzing angles that become possible when your middle linebacker can be trusted to handle difficult assignments should also prove daunting for opposing teams.

For instance, the corner and nickel blitzes. 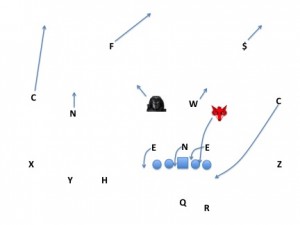 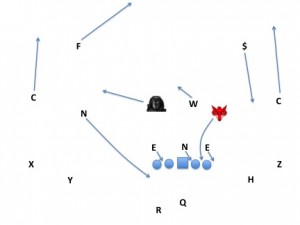 Either of these blitzes could be just the thing for catching an unsuspecting young QB off guard, in addition to allowing Texas to use an athlete like John Bonney, Duke Thomas, or Kris Boyd as a blitzer. The key is that the middle linebacker can hold up in coverage if the QB realizes what’s going on and tries to nail a quick throw to a slot receiver in the middle.

The skill set Malik will need to master to make this work might take him some time to develop but if he can hold up well enough it will allow Texas to bring some major disguises. If he can eventually make offensive teams terrified of throwing hot routes against him then he’ll do tremendous damage to many spread passing offenses that are used to feasting on linebackers with quick throws against the blitz.

Finally, if he can be a coverage adjuster against motion without leaving the run defense exposed then Texas is really going to bring the pain to “spread to run” offenses as well.

As Eric highlighted in his “Looking for Improvement” piece, a lot of Malik’s initial need for development is going to need to come in how he plays the run. Inside linebackers have to be able to quickly diagnose plays, get where they need to be, and then be able to translate power from their hips to beat blocks and stonewall runners.

Malik didn’t have to do much of that in high school and it was a simple matter for him to physically overpower blockers that it wasn’t expedient to just go around. It’s likely going to take a while for Malik to adjust to life at inside linebacker and figure out how to use his eyes to guide his steps. His tremendous speed is going to allow him to still get the job done at times even when he’s not reading things clearly, but he’ll only be able to unleash his superior athleticism after learning the finer points of technique for playing in the box.

As we noted above, learning to use his eyes and feet in coverage will also have a learning curve for Malik but it’s making plays in the box against the run that is typically most challenging for young players. There’s no margin for error when you are working in tight spaces against massive upperclassmen on the OL and explosive athletes at RB who can hit a crease and be gone.

We’ll not have a particularly clear idea of where Malik is in his development as an inside linebacker until September 5th so it’s hard to say how much of the defense will be built around Malik in the first year. At the very least, I think you can expect a predator package designed to get the most out of his abilities as a pass-rusher and he seems the best option to start at middle linebacker, but whether or not coverage structures are extensively built around him will have to remain to be seen.

Ideally the Texas defense would be built around Ridgeway’s dominance inside, Texas’ complementary safety tandem (specifically Jason Hall), and what will likely be a very solid secondary in terms of coverage ability.

However, Ridgeway will need help to avoid having opponents zero in on him, Hall hasn’t proven he’s ready to have a healthy season, and while Texas is likely to find a corner to play alongside Bonney and Thomas, they’ll still need guys in the middle to take advantage.

With Malik, Texas has a chance to bring along a player that should be able to take advantage of the opportunities from playing behind Ridgeway and flanked by this secondary while eventually becoming the cornerstone of the defense.