When Baylor’s Andrew Billings slipped to the 4th round of the NFL draft it revealed a counter-intuitive truth about the modern Big 12. The prevailing wisdom is that the league is soft and passing oriented. Several NFL scouts have complained that the spread has created a generation of OL that don’t know how to fire off the ball and move people.

Yet here was this dominant nose tackle who anchored Baylor’s very effective run defense and kept 5-foot-9, 220-pound Taylor Young clean and free to rack up 80 tackles, including 13 behind the line of scrimmage. While the Big 12 is nominally a passing league, Billings’ ability to eat double teams was invaluable. To the NFL where the drop-back passing game is dominant? Billings was deemed not good enough.

The reason for that is the rise of RPOs, run/pass option plays where the QB will choose to hand off or throw a quick pass based on whether particular defenders position themselves to cover the pass or stop the run.

So while most Big 12 running games may not be particularly physical, they tend to work from a place of great advantage. If you can’t get an extra defender into the action or slow down the advance of a double team at the line of scrimmage, you can find yourself in real trouble on defense.

On the other hand, if you have a DL that can win the point of attack and withstand double teams, you buy time for speedy linebackers and safeties to check off their assignments and still arrive in time to make the tackle before the runner has picked up a major gain. Or, if you can get an extra guy in the box you can tip the scales back in your own favor. Generally you need both to really shut down one of the better Big 12 running games.

Last year Texas lacked a good “+1 box defender” and then graduated or otherwise lost the best double-team battling DTs on the roster…so what now?

Texas’ plan to stop the run

Charlie Strong and Vance Bedford tend to hold a different philosophy from many defensive coaches concerning the run game. While they are very keen to having a physical defense with strikers and sound tacklers at every position, philosophically they are more concerned with controlling the run than completely denying it.

In his last eight years of coaching, Strong has had four different defenses at three different schools rank in the Top 10 in defensive S&P. His 2008 and 2009 defenses at Florida achieved that distinction, as did the 2013 Louisville Cardinals and 2015 Texas Longhorns.

Of those four defensive units, only the 2009 Florida Gators finished Top 10 in rushing S&P. The 2013 and 2014 defenses at Louisville and Texas only finished 28th and 32nd respectively.

Charlie doesn’t care, because as long as the run game is under control he can focus on stopping the passing game, ending drives, and preventing points. His best defenses were excellent in those regards, thus their high statistical rankings.

Strong is also perhaps a bit less dependent on a true nose tackle than other schemes, though he does make frequent use of a +1 defender to give his boys a schematic advantage in the box.

The 4-3 Under defense that Texas has based out of relies on strong guys who can hold the point at both the nose tackle and strongside end positions, but Charlie’s heavy use of stunting reduces some of the need for the nose to beat double teams. What’s more, the team is playing more 4-2 Over front defenses now that rely less on the nose commanding a double team every snap.

In the Over front the offense can’t really double team the DT to the strong side unless they feel comfortable blocking the DE with a TE or fullback because the strongside DT is in a 3-technique between the guard and tackle: 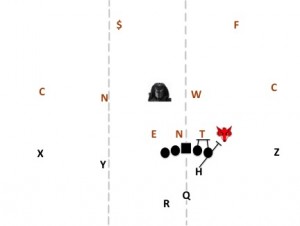 This is why Texas will need good DE play against the run this season when playing the 4-down fronts and why it’s not inconceivable that Charles Omenihu or Breckyn Hager could steal starting jobs from Bryce Cottrell and Naashon Hughes.

If the offense wants to run behind a double team from a spread set or without having to block the DE with a TE, they either need to run to the weakside or use the option. Here’s a common weakside run teams like to use around the league to accomplish that goal: 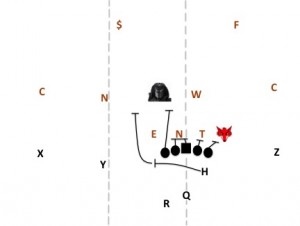 If the team has a QB that likes to run, then the H-back will go around the unblocked end and pick off a LB or DB, if not then he’ll trap block the DE and try to open a crease between the DE and the double-teamed nose tackle for the RB to plow through.

Again, with really good play at DE in Austin, UT can potentially overcome some weaknesses at either DT position so long as they aren’t being shoved backwards into the LBs on every play like the 2nd team was in the Spring game.

Texas has two other fixes to help control opposing running games, both of which involve using a “+1 defender” in the box. The first solution is the run-blitz, which solves the problem of needing good DT play against the double team by sending five pass-rushers and getting 1-on-1 matchups rather than double teams.

Texas has two main ways of involving the DBs to bring a +1 advantage; one is to bring LBs on the blitz and drop a safety in to replace them. The other is to bring the nickel off the edge and replace him with a safety. Texas did a lot of the latter last year with either Peter Jinkens or Duke Thomas and is likely to continue to rely on those schemes with the physical P.J. Locke now in that spot. 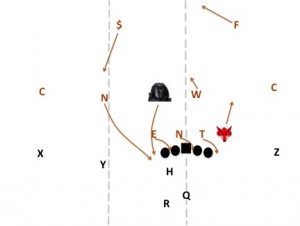 If the offense double teams any of the OL, they run the risk of allowing another blitzer a free run into the backfield. In order to avoid that person being Malik Jefferson or another particularly threatening pass-rusher, the result is often an exploitable matchup for someone else. Hassan Ridgeway found himself working at an advantage quite often in 2014 as offenses focused on controlling Malcom Brown or the Texas LBs and ended the year with six sacks as a result.

The other strategy is to simply drop a safety down without sending any extra pass-rushers so that the LBs can play downhill knowing that the down safety will be there to clean things up behind them.

Jason Hall was supposed to be the solution that made this work in 2015 but he wasn’t really comfortable in the role yet and didn’t handle the space and varying assignments with the kind of instinctive and fast-flowing play that make this style dangerous for offenses. Hall didn’t play in the Spring game so it’s hard to say how much he’s grown in understanding the role but his lack of basic instinctiveness in 2014 or 2015 is concerning.

Deshon Elliott was a mixed bag here in the spring and Kevin Vaccaro was actually the standout, although his limited size and athleticism make him an iffy fit as a full-time starter. The hope for the fall is that Hall and Elliott both make a leap.

Will all this work?

To sum up, Texas is going to look to control the run game through fronts that use DEs to help protect the DT, run-blitzes that even up the numbers at the line of scrimmage, and by bringing an extra defender into the box.

All of this is very important since Texas doesn’t have an established core of DTs that can dominate the interior like they’ve been accustomed to. Paul Boyette seems tagged to play a swing role, rotating between nose-tackle and 3-technique to spell the other DTs, and he’s simply not a guy that can beat double teams. He’s at his best slanting, stunting, or taking a gap in a 1-on-1 matchup. He’ll have enough opportunities to perform those tasks that he may prove to have a really strong year but he isn’t a guy that can consistently hold the point and keep the LBs clean.

The same is true for Poona Ford, although he’s probably even more dangerous than Boyette when he’s free to be aggressive and work against a single opponent.

Chris Nelson is the one returning player who has a future anchoring the point of attack against a double team. Perhaps Gerald Wilbon, D’Andre Christmas-Giles, and Jordan Elliott will bring some immediate help here as well but if you’re counting on a true freshman to eat double teams in more than spot duty you’re asking for a beating. These guys may have ideal size and strength but there’s a tremendous amount of technique and skill that goes into surviving a battle with two 300+ pound opponents.

Texas’ move to control the edges with true 4-3 DEs should be pretty helpful, you can see the kind of trouble the Longhorn D got into last year in their 3-3-5 in this example against West Virginia:

It’s a counter run where an outside linebacker has to diagnose the play and then arrive on the edge with the right leverage to keep the play contained. Since Hughes is working off the opposite edge that duty fell on Jinkens, who gets enveloped by the pulling guard. Now the run isn’t contained and the +1 defender (Hall on the opposite end) can’t hope to arrive in time to help.

In the 4-2-5, a DE would be stationed on the edge who’d have better size and have better positioning to either force the ball inside or spill the runner more effectively. Until guys like Shark McCulloch and Andrew Fitzgerald are ready, this is the superior system for Texas.

Whether or not Texas can bring effective run-blitzes will depend a great deal both on how well Hall or another safety performs in the box and how much disruption Vance’s blitzes can create.

There’s a lot of reason to believe that Texas’ pressures will be pretty disruptive next year with Malik entering Year 2 of college ball, Ford healthy and more involved, and the Hughes/Omenihu/Hager/Cottrell rotation at DE bringing increased firepower on the perimeter.

That leaves the play of the safeties as the key factor in how well Texas can execute all of these strategies to control the running game.

Since Hall is only just now a junior, Elliott a sophomore, and incoming Brandon Jones a true freshman, it should only be a matter of time before this is favorably resolved. Of course Strong is going to want to see that it’s settled sooner than later.

Texas doesn’t have to stuff the run in the spread-oriented Big 12, but they’d better be able to control it.