We like to keep you insiders prepared for what to expect from the coming seasons and I wouldn’t be doing my job if I didn’t speculate to the best of my abilities about what’s coming down the pipe for the Longhorns in the 2015 season.

Reading from context clues of Charlie’s pressers, practice reports, and what we’ve seen of this team from last season, high school tapes, and the spring game, there are some definite things we can glean about this team.

So, don’t be surprised if…

Let’s go ahead and knock a negative likelihood out of the way.

Notre Dame lost 6-foot-5, 315-pound nose tackle Jarron Jones for the year in a “freak” MCL tear in fall practice. Thank God our own monstrous anchor is getting healthy.

Here’s the deal though, while this potentially leaves Notre Dame vulnerable in the middle, they have a rather obvious solution available to them. The Irish have a pair of really good ends in Isaac Rochell, Romeo Okwara, and a disruptive tackle in Sheldon Day, and then there is the linebacker duo of Jaylon Smith and Joe Schmidt, all of whom are tricky players to handle for an OL in a 1-on-1 scenario.

Well, the fire zone blitz is all about creating 1-on-1 matchups for pass rushers and helping them with disguised and helpful angles when they come after the QB and Notre Dame is one of the better fire zone blitz teams in the country.

Much like how the Longhorns will likely utilize the Diaz doctrine, looking to inflict negative plays without giving up explosive gains, without their double-team devouring nose tackle the Irish will probably respond by avoiding double teams and regularly sending five athletic defenders careening into the young Texas OL.

And herein lies the problem; the Texas OL need to work in tandem to have a chance at regularly besting a superior Irish front. Can they do that in the face of confusing stunts, blitzes, and fast moving opponents? Practice reports seem to indicate that DC Vance Bedford can pretty much shut down the Texas offense whenever he wants to by embracing this strategy with athletes like Malik, Hughes, Ridgeway, etc. That’s going to be a pretty good prep for what the Texas offense will face in South Bend.

The only drawback for the Irish in aggressively blitzing Texas is that while it creates one 1-on-1 matchups for their pass-rushers, it does the same for the Longhorn receivers. Unfortunately, it’s not clear that UT’s receivers are a group that can overcome a veteran secondary with multiple good coverage players such as corner Kei’Varae Russell and nickel Matthias Farley.

The Irish also have a nasty change-up for when Texas tries to punish the blitz by mixing in some Tampa-2 defense, a big part of their base package. Swoopes got picked by walk-on cornerback Dillon Boldt trying to force a throw down the field against Tampa-2 in the spring game, it’s often a murderous coverage for spread QBs to navigate on passing downs.

Don’t be surprised if the Texas game plan revolves around 4-wide formations and getting Daje working in space against a safety or linebacker so Swoopes can get the ball out quick.

McNeal is currently listed at 6-foot-1, 236, which puts him in “fullback” territory, and will probably be listed something like 6-foot-2, 250 pounds before he leaves the 40 Acres. His short area quickness and wide frame make him a matchup problem at that size for opponents trying to cover him and his hands may eventually make him one of the more reliable targets on the team.

Long-term his upside is going to come from being able to move around and create angles in the run game or flexing out wide to block on the perimeter or run routes vs overmatched DBs. The latter department is where he’s most likely to have value in 2015.

Spread teams that utilize iffy blockers at tight end or H-back because they have value in the passing game are a dime a dozen and it’s more than possible to shield McNeal from difficult blocking assignments in the Texas scheme.

The problem McNeal can help the Texas offense solve is how to find ways to move the chains against loaded boxes without an established deep threat on the roster. The two routes that Texas will want McNeal to master in order to accomplish that aim are the stick route and the dig. 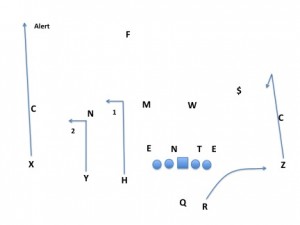 With the stick route, Texas gets McNeal isolated in space against a linebacker and hopes that he can’t stop #Finessin from finding space to catch the ball and turn up field over and over again.

If the defense has to start double teaming him, it leaves the slot receiver open. If they have to drop a safety down to cover him they don’t necessarily guarantee a better matchup and they open opportunities for Texas elsewhere, such as on the boundary. 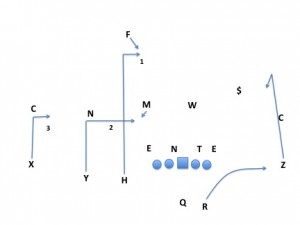 Then there’s the dig route in the “levels” concept, which we’ve discussed repeatedly in this space. Last year opponents would let the middle linebacker help the nickel take away the shallow cross and leave the dig route to the safety to cover and Texas couldn’t make them pay, even when they used John Harris in that “H” spot rather than Geoff Swaim.

If McNeal can provide sure hands and a big target on that route, then it changes up how defenses can play the concept and opens opportunities elsewhere on the field.

Both of these routes require some, uh, finesse to run properly. If McNeal is already proficient here he could have a huge impact for Texas as a reliable target in the seam.

…An improvement in win total comes down to special teams play

The roster is now stocked with eager athletes that should give Texas a decisive advantage and ability to both cover kicks and return them more efficiently than any opponents.

Field position is one of the five biggest factors in who wins football games. Texas has given up hidden yardage far too often in recent years and a team that is loaded with explosive athletes and that includes tackling as a major part of the team identity needs to do better in 2015.

…Jason Hall is the key to the defense

We have already talked about how returning Dylan Haines and Jason Hall at safety gives Texas a chance to build a defensive identity, namely one in which they have a crafty cover safety roaming deep while a 6-foot-2, 209-pound missile seeks and destroys targets in the box.

I was spooked by concerns that Hall still wasn’t healthy but he seems to be back in form, which is huge news. It’s hard to overstate how much higher the ceiling for this team is if Hall can have a healthy season that builds on what he did against UCLA and Oklahoma a year ago. Hall hasn’t drawn much ink around the Longhorn interwebs (at least from what I’ve seen) but the Diaz doctrine that will be in affect in 2015 needs a box safety that can own the middle of the field and tackle ball carriers that get through the first wave.

The backup plan to a healthy and productive Hall seems to be using Haines as the down safety again, as Texas often did in 2014, while Adrian Colbert drops deep. That’s two downgrades at a position that should be, and needs to be, a team strength.

A big year from Hall on the other hand and you have the ingredients for another elite defense.

…if opposing teams and fans start to hate and fear Texas

Regardless of whether Texas wins a bunch of games this season or not, Strong is compiling a group of elite athletes and he’s turning them into a pack of wild dogs. Go watch some Louisville or Florida defensive highlights, or just watch how Texas defended TCU before the offense let the air out of its tires, and you’ll see a group that terrifies opponents.

I’ll never forget watching Texas stuff TCU in the red zone early in the Thanksgiving game with some Baylor fans. The way the Texas defense swarmed to the football really stood out to a group of people that mostly watch Big 12 football. You just don’t see that regularly, even TCU often looks rather average when trying to corral an offense like Baylor’s.

The Bears are nervous about what Strong is brewing in Austin and it won’t be any less scary when athletes like Kris Boyd, Malik Jefferson, and Hassan Ridgeway are the big names.

A Charlie Strong defense intimidates opponents and dictates the tempo of the game. If he can get these charges playing fast, aggressive, and smart, sooner than later the result is going to be a defense that only talented and veteran opponents can withstand. It should make for an enjoyable season to watch these pups get a taste for meat in 2015 even if the offense can’t get on track.

….If the offense starts imposing their will in the run game and mauling people behind Patrick Vahe and Kent Perkins? If Texas features a group of players that maul people on Saturdays, let them know all about it on the field, and then go into class and stay out of trouble every other day of the week? You’ll have a combination of moral and physical greatness that makes Texas the most hated institution in the region.

As it should be, surprises around the 40 Acres are tiresome.