There is no offense prevalent in the game today that does a better job of stressing every part of the field than the veer and shoot.

The spacing and layering of concepts in this offense are intended to allow the offense to isolate and attack every opposing player on the field with speed and/or power.

With the emergence of Shane Buechele in the spring as a QB capable of distributing the ball well enough to execute the fundamentals of the system, the question now becomes how well Texas can isolate and attack different positions in 2016.

Assuming a basic level of competency from the QB (being able to make the basic reads and throws), from the OL (being able to execute blocks against honest fronts), and from the WRs (being able to run the routes and catch the ball) the level of dominance a veer and shoot offense can achieve is determined by what I call its “alien quotient.”

That term comes from a conversation with Manny Diaz about defending RPO-based offenses and the Baylor spread in particular. If the offense has multiple “aliens” out on the field, such as a Tevin Reese or a Corey Coleman who can’t be covered unless you send help, then someone is always going to be able to find open space. Diaz described this as being precisely the problem with trying to defend the 2011 Baylor Bears when they had Terrance Williams, Kendall Wright, and Tevin Reese on the field together.

I think we’ll find that Texas currently has at least two aliens on the roster that’ll take the field next season. One of them has two heads and is called, “Forewarrened” and the other goes by the name “John Burt.”

These two are going to work in conjunction together very nicely when Burt is lined up on the boundary side because most opponents simply won’t be able to risk not dropping a safety close to the box to prevent D’Onta Foreman and Chris Warren from having a chance to hit the 2nd level with momentum.

For most safeties in the league, trying to drop down and make a tackle on those beasts in space is going to be weighed as an occupational hazard. However, if teams just keep guys down in the box they can build a pile up that prevents the Texas RBs from finding any running room. 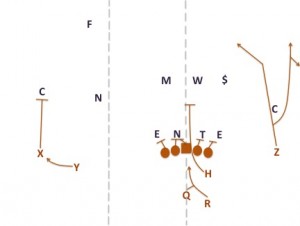 The bubble is intended to hold defenders to the field while Buechele is asked to make defenses pay for how they weigh the conflict between doubling Burt and dropping a safety to stop up the run.

As you see, teams that want to drop that boundary side safety down are going to have to be able to survive the matchup between Burt and that corner. For many teams, this may also prove to be a major struggle.

There’s also a chance that Texas will find they have another alien opposite Burt at the X receiver spot if Foreman can make a major leap or Collin Johnson can capitalize on his tremendous talent as a true freshman. At the very least these guys will probably thrive as a result of playing defenses that will be primarily concerned with Burt and Forewarrened.

But there’s still the deep middle of the field, which is traditionally a favorite target of veer and shoot teams. To really get after safeties and linebackers who have too much space to cover in the middle, Texas needs effective play in the slot.

In the diagram above you’ll notice that the slot is expected to be able to hold the nickel and free safety with the threat of what he can do after the catch on a screen. If the slot receiver can’t threaten the free safety on screens or with vertical routes, then defenses are freed up to bring their +1 run defender from the nickel/sam linebacker or with that free safety while leaving the slot in man coverage.

Additionally, if the slot can’t really threaten opponents then they can double up both outside receivers on passing downs and dare UT to beat them with throws over the middle to a third option receiver.

Besides the fact that the slot receiver needs to be able to help the offense put stress on teams and prevent them from ganging up on the run or other receivers, getting after opposing safeties with vertical routes from the slot receiver is one of the more fun/devastating elements of this offense. Opposing safeties, linebackers, or even nickelbacks that get assigned to the slot are often not up to the task of lining up outside the hash marks, where they can’t easily get help from other defenders, and then trying to turn and run with speedsters running into open grass.

Here’s one of many fun ways that spread teams of all types will use to attack the guy on the slot: 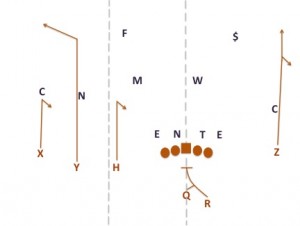 The way Gilbert will often use this is basically to have the two underneath routes be quick stops/hitches while the deep guy basically runs at the deep safety and breaks his route into open grass while the QB leads him. When this is combined with play-action it’s usually a kill shot.

Routes and plays like this require a slot receiver with some shiftiness for setting up deep defenders with double moves and then pure speed to run by them. Between the deep routes and the screens, speed is essential at this position

Can Jerrod Heard be an alien in the slot?

The mere suggestion of moving two-time 4A state championship QB Heard away from QB is likely to draw at least some push back given that he’s only been at Texas for two years and one of them was spent with a redshirt.

However, the facts remain that Heard has never shown a high aptitude for the passing game at any level, was 2nd or 3rd string in the spring before he went down, is competing for the job in an offense that’s all about throwing the ball, and is one of the team’s best athletes.

That last point is important, because everyone should agree that Heard has demonstrated game-changing abilities when he has the ball in his hands past the line of scrimmage. Even at a place with as much talent as Texas has there is a major opportunity cost to be weighed from having such an athlete sit on the bench while trying to learn something he may never master.

And to what end? The veer and shoot obviously makes great use of speed and athleticism but the role of the QB is to be a point guard and facilitate the athleticism of others by distributing the ball. Even if Heard were to develop a much greater understanding of the offense his greatest skill, running the ball, would be minimized by this role while his weakest trait would be the focal point.

This is most plainly seen in Heard’s two main responses when under pressure, either to find a receiver or to just take off and run. On the occasions when Heard would try to find a receiver, the result was often a sack as he lacked an understanding of where his release valves were or when to give up and throw it away.

Heard took 28 sacks last year and was sacked on 15% of his passing attempts, which you see here compared to Tyrone Swoopes, the Baylor QBs of 2015, some of the top scramblers in the conference, and fellow young scrambling explorer Joel Lanning: 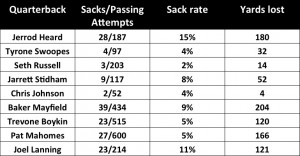 Those are disastrous numbers, especially for a team that was looking to win lower scoring games by running the ball and playing defense. You’d hope those numbers would nose dive in the new system but the point remains, Heard is not comfortable making decisions with the ball under pressure UNLESS he has an opening to take off and run.

In those instances Heard was absolutely lethal to opponents, here’s an example against Oklahoma State where Texas was able to get the Cowboys’ underneath defenders out of Heard’s rushing lanes via misdirection in the backfield:

He’s clearly much more comfortable making decisions on the move than in the pocket and setting up defenders to lose their leverage and be victimized by his legs.

Heard’s start-stop ability, his lateral explosiveness, and the Vince Young-like effortlessness in which his long strides can quickly chew up yardage are only occasionally put to use at QB and when they are he’s no longer operating as a distributor within the design of this new system.

You might say, “doesn’t this explosive scrambling potentially make the rest of the offense more effective by requiring the attention of the defense?” It can indeed, but Heard hasn’t shown aptitude for the main role of “point guard” that the quarterback in this system plays. It’s as explosive an offense as there is in all of college football but only when the QB is throwing the ball deep and wide.

So by looking to make Heard a QB in this system, you are potentially blunting or ignoring the main ways in which it’s designed to shred defenses and doing so when there’s already another way within to unleash Heard’s athleticism.

Move him into the slot

Assuming he’s even decent catching the ball, there can be zero doubt that Heard would be dynamic on perimeter screens and quick passes. Put him in the pocket and teams have to worry about him scrambling and successfully getting loose from time to time, but put him in the slot and they have to worry about him housing a screen pass or going deep on virtually every single play.

Want to see his start-stop jukes in action? Let him run option routes on a Big 12 safety playing off coverage and see how they like trying to anticipate his route breaks and then flipping their hips and running with him down the field.

Jerrod recently posted a tweet that just read “4.3” apparently referring to a hand-timed 40-yard dash. There’s no way Heard can run a 4.3, electronically-timed 40, but if you follow the typical conversion rules (add approximately .2 seconds to all reported hand times) you end up with something in the 4.5 to 4.6 realm.

That’s comparable to the numbers posted by Baylor slot Kendall Wright, who in four seasons in this offense posted 4,004 receiving yards and 30 touchdowns.

There’s a role for Heard’s skills in this offense, they could fit like a glove and help the system successfully overwhelm defenses and put stress on every defender and every part of the field. That role is in the slot.