One thing you can always seem to count on in the Big 12 is that by the time midseason rolls around, the league’s weaker teams are often falling apart due to injuries. The round-robin scheduling has a way of separating the chaff from the wheat and lack of depth or luck with health is one of the many ways it puts a magnifying glass on weaknesses.

Bill Snyder’s offense is currently built around a run-game that requires heavy QB involvement but is highly efficient, and a passing game with precise timing routes and vertical, play-action shots. They can execute the run game pretty well but it’s not an explosive attack and they can’t execute the passing game at all, which means points are hard to come by. Combine those factors with Texas walking in to a rain-soaked DKR with an established smashmouth identity on offense and you have a relatively easy victory.

Next up is Paul Rhoads’ Iowa State Cyclones, standing between Texas and a .500 record and waiting for the Longhorns in Ames, Iowa, where nightmares can come true. Iowa State has just replaced its returning starter at QB and in the midst of that process lost the offensive coach (Mark Mangino) that brought them to the place of relative competence they find themselves in today.

It’s possible they’ll rally around their new QB (Joel Lanning) and an aggressive defensive strategy and beat Texas in a slugfest next Saturday night, but this game is basically going to be two teams looking to accomplish the same aims (low scoring, lots of running) and the Longhorns have far more talent, versatility, and confidence in their identity. Also, as inconsistent as Nick Rose has been, the Iowa State kicker is bad enough that they often consider going for two.

Meanwhile around the league, Baylor lost its QB Seth Russell to a tragic neck injury and the other top three teams on Texas’ schedule are already behind them. What once looked like a death struggle to reach six wins is now an outside shot at winning seven or eight and building huge momentum for 2016.

Another addition to the smashmouth identity

One of the more satisfying elements of the Kansas State win was Norvell taking it to Snyder with his own playbook, unleashing Swoopes in the Storm Swooper short-yardage package as well as in a “dread-wing” set at the end of the game that mirrors the Wildcats’ own offense.

The latter package was new for Texas and was basically what the 2014 Texas offense SHOULD have used had Watson not been bent on trying to turn Swoopes into another Joe Ganz or Teddy Bridgewater. On paper it looked like this: 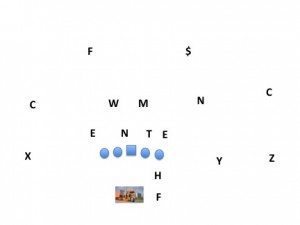 This is the spread-I formation that Texas has established as the foundation of the offense but with no tailback on the field and instead fullback Alex De La Torre lined up alongside Swoopes in the backfield.

You’d think K-State would be used to practicing against this look but they were virtually helpless when Texas used it to run the ball down their throats late in the 4th quarter:

This is the most difficult kind of run game to defend either on a chalkboard or on the field because the offense can both spread you out and also hammer you with a short-yardage style lead run. How exactly can the defense get numbers to the point of attack in time against a power run like this?

The only answer is to load up the box with safeties in close enough proximity to the line of scrimmage to be able to meet lead blocks before big creases open up, but if the QB can throw at all he’s then looking at three different receivers operating in 1-on-1 match-ups with tons of space and the possibility of a brutally effective play-action/max protect scheme to work in.

I’d be curious to see what might happen for Swoopes if this package was fleshed out and if he might be able to build up his confidence to the point where he could be a starting QB again. It’d be mostly academic, as Heard is clearly the QB of this team, but it’s valuable to know that Tyrone could step in and Texas could still maintain their identity as a run-oriented, smashmouth team if Jerrod were injured at some point this year.

If Tyrone played for Kansas State they’d be contenders in this league, he’s Joe Hubener with a tougher build and a much better arm.

After several years of being a 4-3 Over, Cover 4 football team, much like the rest of the world, the Cyclone staff have pivoted this year and built a 3-3-5 defense in Ames to help them combat the spread.

Unlike most teams that convert to three down linemen defenses, the Cyclones don’t have good linebackers that they can build around. What they do have are several disruptive DL that thrive in the stunt-heavy system, including defensive end Dale Pierson (a 6-foot-2, 249-pound senior with six sacks) and JUCO transfer Demond Tucker (6-foot-0, 296) who is highly disruptive in the A-gaps or setting up teammates with loops.

Against the Bears they cleverly subbed in cornerback Jomal Wiltz at field safety, loaded the box with as close to seven defenders as they could get, and trusted their four defensive backs to hold up in off-man coverage against the Bears long enough for the stunts and pressures to cause problems.

Here’s a glimpse of how that looked, you can probably expect something similar as they look to load the box vs Texas: 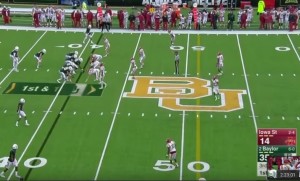 This was successful at preventing Baylor from gashing them with the passing game, but even with the run game, out-numbered Iowa State still surrendered 276 rushing yards, including 6.3 yards per carry for Shock Linwood.

There is little reason to believe Iowa State will be ready to take on Texas’ increasingly varied run game if the Longhorns can control Tucker at the point of attack. If the speedy Cyclone nose tackle is getting under Doyle’s pads all night and re-setting the line of scrimmage in the backfield, then Texas could have some big problems. If Texas can cover him up, then its massive OL should bully this group and bury the ISU linebackers.

The Cyclone Offense after Mangino

Sam Richardson was terrible, and I don’t know why Mark Mangino didn’t want to replace him with Lanning sooner, but I bet he had his reasons. The new Cyclone QB will be in charge of protecting Iowa State’s offense, which is almost entirely comprised of zone runs.

Most of Iowa State’s offense is designed to create opportunities to run zone behind their center/right guard combination of Jamison Lalk (6-foot-6, 304) and Daniel Burton (6-foot-6, 319). Their combined size and excellent chemistry in the scheme makes it very difficult to ever inflict negative plays on the Cyclone offense, and running back Mike Warren is a patient and tough inside runner who knows how to set up their blocks and pick up tough yards:

The Cyclones clearly wanted to protect this play with RPOs attached but Richardson was inefficient on them and they don’t really have any explosive flex RBs to hit on the perimeter to make them that dangerous anyways. Now you can expect them to protect the play with the occasional RPO but a lot more basic QB zone read with Lanning.

Lanning is somewhere in between Tyrone Swoopes and Minnesota’s Mitch Leidner both as a runner and a passer. He’s 6-foot-2, 232 pounds, a tough runner, and if you give him space, he can get going downhill and eat up some yards or truck a smaller defender. In the passing game he’s competent but clearly only has a mastery over a limited number of concepts. He can hit some downfield throws with a degree of touch, which is something of a concern given the size of Iowa State’s outside receivers (6-foot-5 and 6-foot-6 respectively).

For the Cyclones to move in the direction of being more of a “zone on most downs, play-action deep shots or rollouts on other downs” team seems obvious to me and must have seemed obvious to Rhoads since he was willing to part with Mangino over the right to move the offense in that direction…I’m just hesitant to side against the big man.

Iowa State also has a “dread-wing” type package of its own for Lanning with QB power/counter plays but its execution of the pulls, traps, and kick out blocks that make the play work doesn’t compare to what Texas is getting from Bluiett, DLT, or Vahe. They’re much better when just running zone.

Texas’ base 4-3 Under package will probably continue to get some work in this one, even against ISU’s 11 personnel group (three WRs, one TE), and Strong and Bedford will look to make Lanning prove he can be precise enough with ball placement to beat Holton Hill or Davante Davis.

If Ridgeway can dominate Lalk and force their combo blocks to stay at the first level longer AND prevent them from reaching the 2nd level as they’re accustomed to, then this game is already over as Iowa State simply won’t be able to move the football.

That said, you can probably expect ISU to be clever about running the ball on Tank Jackson or another DL they expect to be able to reach and cover. Expecting to put up 100 rushing yards or so and a few points pounding the ball with Mike Warren, it’s a legitimately good running game they have up in Ames this year.

Obviously Texas needs a win here and then if they can simply protect home field from here on out (Kansas and Tech are the remaining home games) then they’ll achieve bowl eligibility. What would be encouraging to see here though is a team that is as physical and confident in their new identity on the road as they are in a rivalry game or at home. If Texas can manhandle the Cyclones on both sides of the ball and blow them out at night in Ames, then we can start to get excited about the possibility of a 7- or 8-win season.