One of the reasons that college football recruiting is so fun to follow and consume is that its theoretical nature makes it easy to focus on hopeful futures.

“Your team is loaded with blue-chippers? Congrats!”

“They’ll be unstoppable in two years if not sooner!”

“What’s that? A bunch of 2/3 star kids in the class? Unheralded gems, no doubt!”

“Gonna be fun to see what they become over the next three to five years! Those rivals may be laughing now but just let them wait…”

One area where I think we could enjoy a little more fun daydreaming is imagining exactly how particular skill sets might intertwine to form deadly combinations down the line.

For instance, there’s a particular offensive combination that Texas could potentially bring in for 2017 with skills that could overlap in a remarkable way. No doubt the Longhorns would score 40 points every game.

Here’s the four players Texas would need to bring in to make you realize this potent future offense: Sam Ehlinger, Major Tennison, Damion Miller, and JK Dobbins. So far so good since three out of four are already committed but there’s still work to be done in securing this bunch and of course Dobbins will have to be pried away from Ohio State.

If Texas can land these four skill players on offense, their complementary skill sets could lead to remarkable results.

It all starts with Sam Ehlinger

I did a breakdown earlier on Ehlinger’s unique skills which is important for understanding the best way to make the most of everything he can do and what kinds of players to put around him.

Ehlinger has three main skills that Texas will want to capitalize on once he’s on campus and in the QB1 slot (which in our theoretical “let’s dream about the future” is an assumed certainty).

First, he’s fearless in the pocket and excellent at standing tall and throwing strikes even when under pressure.

Second, he’s a very physical and laterally quick inside runner with good vision and feel for finding creases between the tackles.

Third, he can make something happen with his legs either with the scramble or just buying time before hitting a receiver downfield.

Like most other quarterbacks in this world, Ehlinger is likely to be at his best working from a spread formation. Unlike most other QBs, he can provide his own inside running and needn’t be paired with a feature back that carries the ball between the tackles 20x per game.

What you want to put around Ehlinger then are weapons who can get open in the passing game and a RB who can bring some speed and receiving to the equation.

Fitting in Dobbins, Miller, and Tennison

Playing with Ehlinger is potentially the ideal scenario for Tennison, Dobbins, and Miller respectively.

For Tennison it makes the possibility of becoming a dual-threat TE much more feasible by solving the problem of trying to become proficient blocking DEs while learning to run pass routes.

With Ehlinger on the field Texas can run power and zone by optioning an unblocked DE rather than trying to base block him or kick him out with the tight end. That makes it plausible that UT could turn Tennison into a dual-threat weapon that could realistically master a variety of routes and blocks.

When he’s blocking, Tennison could focus on arc and lead blocks where he’s picking off a safety or linebacker at the second level, or stalk and screen blocks on the perimeter intended to spring other skill players into open grass. Those are simple enough that Tennison could also spend valuable time honing his potential running routes in the seams.

Texas could motion Tennison in and out of the box to force defenses to give away man, zone, or blitz calls and to punish them for their personnel and schematic decisions.

Dobbins would fit in here as a versatile back with all the opportunity in the world to run on the perimeter thanks to being paired with Ehlinger. Zone and power could all be drawn up to allow J.K. to strike out wide for the edge, perhaps running behind Tennison, while mixing in some inside runs and touches on the perimeter in the passing game. Playing off Ehlinger would be ideal for him in terms of being able to find open grass.

Finally there’s Damion Miller, who’d fit the remaining need for a deep threat to draw safeties and open the run game up for Dobbins and Ehlinger and the seams and flats for Tennison.

All combined these players allow an offense to threaten the interior gaps and the edge in the run game, combining both steady gains with home run potential. They can also attack shallow, mid, and deep in the passing game, again both with a steady gainer and a home run hitter.

It’s worth mentioning that there are still two skill positions left for Texas to use to get even more talent on the field.

Here’s what this looks like in terms of tactics designed to abuse Big 12 defenses in our wonderful, hypothetical future. In these diagrams Ehlinger is Q, Dobbins is R, Tennison is H, and Miller will be X.

Let’s start with the run game, which is where this group would do a lot of their damage to teams trying to brace themselves to avoid getting shredded by the passing game. One lesser-known running scheme where these guys could make hay is the inverted zone read play, or the “zeer”: 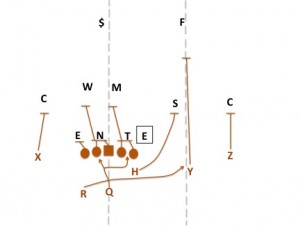 Basically this is your standard zone-read play but with the RB taking the outside track normally assigned to the QB while the QB is reading the blocks on inside zone and potentially hitting the cutback if the DE plays wide to contain the ball.

This is a useful tool in the toolbox if the QB is up for it because teams often like to play the zone-read by slow-playing the perimeter with their unblocked DE and that dog won’t hunt if Dobbins and Tennison are joining forces to assault the perimeter. The DE has little choice but to get wide to try and stop the offense from hitting that potential home run, which then leaves a five-on-five situation for the OL and a likely cutback lane for Ehlinger.

Defenses would probably pick their poison and live with the QB runs, but Sammy’s got a knack for reading and hitting creases, running through arm tackles by LBs, and potentially even running over a DB.

If the offense doesn’t want to expose Ehlinger to 10+ carries per game running between the tackles, they can still mix in traditional zone-read plays once the DE has been forced to respect the threat on the perimeter: 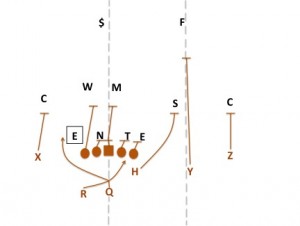 Texas can also mix in some QB power and power-read that get Dobbins opportunities to run wild on the edges while Ehlinger takes on the burden of running between the tackles.

So let’s say this approach is successful enough to force defenses to start dropping safeties into the box to handle the run game. Now they can really unleash Tennison and Miller.

Because he’d be mostly blocking on the perimeter anyways, Tennison could easily either align in position to run vertical stem routes or just motion wide to do so. If the Major is opposite Miller, they can create some interesting problems for the defense.

Here’s an example where Tennison is running a dig route on “levels” while Miller is alone on the boundary running a “sluggo” (slant and go) double move route. How does the defense want to handle this? Do they drop a safety to try and defend Tennison and take their chances with their corner isolated on Miller? Or leave the boundary safety deep over Miller and hope Ehlinger can’t execute a throw to Tennison he’s already thrown a million times in high school? 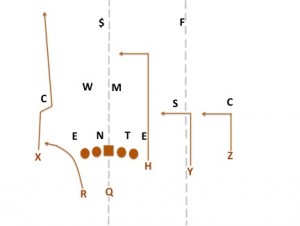 Tennison and Miller could also join forces with Dobbins all on the same route combination and force defenses to figure out where to shade help. 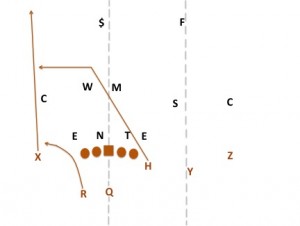 The fact that Tennison is a big target in the middle of the field, Miller an explosive one on the outside, and Dobbins too dangerous to be left by himself underneath opens up the passing game to a lot of different options. While Austin Westlake had some solid receivers last year, Ehlinger would be like a kid in a candy store working with these athletes.

Magic happens in team sports when skills overlap, strengths complement strengths, and weaknesses are mitigated. If Texas can unite these four guys in the 2017 class, they’ll have a collection of athletes who would find it all too easy to work together to overstress and break apart defenses.