Everyone has their stress points, and they vary from team to team depending on scheme, personnel, and context. When it comes to game planning against a team like Notre Dame, understanding its stress points and having a strategy to attack them is everything.

In their formulation of maneuver warfare and “blitzkrieg” tactics, the Germans emphasized the concept of the “schwerpunkt” which translates literally as “hard point” and more accurately as the focal or decisive point.

The Germans wanted to concentrate numbers at the schwerpunkt, win at that decisive place, and thus roll up the opponent regardless of what was happening elsewhere. For years Stoops’ Oklahoma teams always understood where the schwerpunkt was for crushing and rolling up the Texas offense. “If we just blitz the nickel here against the zone read and bracket this guy on 3rd down…”

You can focus on talent accumulation and having a team that simply knows how to execute the system but that will only take you so far if the game plan doesn’t attack or defend the schwerpunkt, especially against a team with comparable or better talent.

Self-scouting: Where are the opponents looking to concentrate?

Texas has very obvious points that enemies will look to focus on in order to shred and collapse the entire Longhorn effort. On offense it’s the likely inability to avoid penetration when opposing teams bring pressure. As Charlie noted in his presser,

“Here I am as a defensive coach, if I see two freshmen linemen, I’m going to blitz you every snap and see if​they can block you.”

When you also add the consideration that Texas’ QBs are Tyrone Swoopes, who didn’t throw tons of picks but had terrible ball security and took a lot of sacks when pressured last year, and Jerrod Heard, to whom working in the pocket and making progressions is still a new concept, you have a recipe for disaster.

You might wonder why UT’s staff would determine that the best way to protect these guys is with an OL laden with true freshmen but the reality is that Texas was going to struggle in pass protection in 2015 whether Charlie played freshmen or not.

The only chance Texas has is if they can run the ball, punish the blitz in that way, and keep opposing pass-rushers from teeing off. That’s why Vahe is starting and Perkins is out at right tackle.

On defense, Texas has a very similar weak spot. We talked early in fall camp about Texas playing more 4-3 base personnel against the Irish in order to keep senior Jinkens on the field but in light of further developments from camp it now looks as though this would be a weaker lineup for the Longhorn defense.

With that lineup, Texas has Hughes potentially lined up across from a tackle or tight end where he can be easily targeted and his lack of size and strength at the point of attack can hurt him, you have the veteran Jinkens on the edge, and you have two freshmen trying to maintain interior gaps in Malik and Freeman. Understanding blocking schemes and run fits is one of the tougher jobs on defense and linebackers don’t have just all day to figure it out and get their hats in the right places. You’ll often see a slower kid who knows what he’s doing play faster than an athlete at linebacker simply because reaction time is so essential.

Notre Dame wants to run the football, and Texas’ best option for countering its run game is not to line up and out-execute them with base personnel.

The best base defense for Texas in 2015 is generally going to be this one: 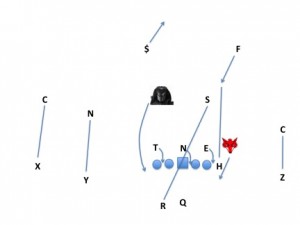 Nickel personnel, 3-3 pre-snap alignment, and Jinkens on the field in place of Freeman. Don’t get too caught up in the blitz paths of this particular diagram but note the match-up assignments of Texas’ players.

The DL are filling gaps between the tackles with the Tank (the nose) filling the a-gap and looking to command a double team. Ford or Ridgeway is stunting into a 3-tech alignment, and Shiro is looking to anchor the edge.

Hughes and Malik are versatile defenders but they’re both probably going to be at their best in 2015 when blitzing, as they are allowed to do here. In this instance they get to take either edge and keep the ball funneled inside.

On the inside you have Jinkens and Hall, two players that have lateral quickness and veteran experience in fighting through the wash, ready to clean up anything that gets through the first wave. The three best receivers are matched up by the corners and nickel, Haines is playing prevent on top of everything, and Jinkens and Hall take the running back and tight end if they run routes.

This is a much more sound look for Texas that gets better personnel on the field and in the best position to both attack opponents and to withstand counters. Because Strong and Bedford are big on disguise and versatility you’ll see Jinkens be used on the blitz, Hughes used in coverage, and Malik doing a manner of different things but the 5-man pressure, two men playing clean-up, and single high safety match-coverage structure is going to be Texas’ best base defense in 2015.

Finding the schwerpunkt on the Irish side

Notre Dame’s offense is absolutely loaded. They have a big, talented, and veteran OL, they have skill players of different shapes and sizes, multiple effective backs, and some solid ancillaries at TE to help them all out.

The one area that could cause their system to collapse is the ability of Malik Zaire to execute the passing game from the pocket.

That means that the Texas defense needs to follow a pretty standard path to rolling up the Notre Dame offense: Stop the run, force passing downs, and then target Zaire’s inability to win from the pocket.

The 5-2 structure provided above represents Texas’ best bet for stopping the Irish running game, the concern is what happens if Notre Dame comes out in double TE sets to encourage Texas to get base personnel on the field and then executes their QB run game all day long?

Texas needs to be ready to throttle these types of sets from the Irish and load up the box with as many defenders as it takes to force Zaire to have to throw the ball on early downs rather than being able to safely pound the ball on the ground. If Texas can’t handle double TE formations from Notre Dame, this game probably isn’t going to go very well.

If they can, and can regularly get Zaire in passing downs, then the strategy can get interesting. QBs that lack comfort throwing from the pocket and like to move around are pretty vulnerable to clever defenses.

Sometimes they can be destroyed with gut pressure that flushes them out to wide contain players, but Texas has another potential strategy for handling them. 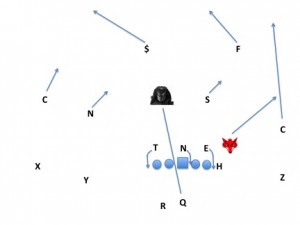 Texas tried this strategy with Jake Waters and it didn’t work too well, but it did yield results against Trevone Boykin. Basically, Vance dropped three deep pass defenders, four underneath zone defenders armed with knowledge of how to take away the opponent’s favorite routes, and then a spy on the QB.

If Zaire wants to try and step up and escape the pocket, he’s going to be tracked by a more athletic foe, which he is surely unused to…and the predator will be eager to collect his first trophy. If you’ll remember back in 2009, Colt McCoy was undone when he went up against Ndamukong Suh and discovered that he couldn’t roll out of the pocket fast enough to evade the “house of spears.”

This is often a tremendous shock that totally panics and ruins a mobile QB, when he finds that every time he uses his legs things get worse and muddier rather than better and clearer. Jefferson can do that to Zaire by sitting in a shallow zone, spying his eyes, and then tracking him down every time he tries to use his legs to find passing or running lanes.

For the Texas offense, the schwerpunkt could be found in one of two places, going up the middle against a DL that has lost its star nose tackle or working in space against a cast of safeties and nickels that haven’t proven the ability to cover and tackle speed in space.

Since the Irish are likely to both shore up their interior DL and look to pressure and destroy the Texas offense with 5-man pressures (just as Texas will likely do on running downs against them), that leaves the best place for UT to concentrate on punishing Notre Dame in space.

If Traylor has brought any of his better jailbreak screens from Gilmer, now is the time to use them to get the ball in the hands of Foreman or Daje. There is little reason for Texas to try and get the tight ends on the field to help to block Notre Dame’s blitz package either. They (the TEs) are not that great at it, there are too many weak spots in the Texas protections to shore up, and that won’t hammer the Irish schwerpunkt regardless.

The key will be getting speed on the field, giving Swoopes tons of easy reads to get the ball out quick, and forcing the Irish to choose between spreading out to handle Texas’ speed on the perimeter or focusing their firepower in the middle of the field where Texas is vulnerable. If the Irish spread wide to avoid getting ripped by Foreman, Daje, or MJ, then Texas can hammer the ball in the middle with Gray.

With a clean game from the Texas offense, and some unexpected savvy from the Longhorn D in matching up against bigger formations and a challenging run game, Texas could win the decisive battles in this game that will result in victory on the scoreboard.

Fail to concentrate at the right points and Notre Dame’s superior talent and experience will teach the underclassmen and Texas staff a hard lesson to start out this season.