Things were progressing in a promising fashion for Texas when they last played TCU. Tyrone Swoopes had just led UT to a big win in Stillwater over Oklahoma State that made Charlie’s team bowl-eligible and they had some extra time off to prepare for the Frogs’ invasion of DKR on Thanksgiving.

Then Swoopes and the Texas offense completely cratered and the team has gone 1-5 since.

Coming off a controversial defeat to OSU and desperately needing to win some upsets to make bowl eligibility a realistic outcome for 2015, you’d expect that the Texas program would be reeling heading into this game with TCU. In fact the opposite is true, the Longhorns are quietly surging under the surface and have a chance to seize on a huge opportunity on Saturday.

TCU is an opportunity?

TCU is currently ranked No. 6 in the nation (they were no. 3 before almost losing on the road at Tech last Saturday) and were most pundit’s favorite to win the Big 12 this season and be the first team in the conference to compete in the College Football Playoffs.

After promoting them as a sleeper in 2014, I’ve been much cooler on their chances this year. Given TCU’s low annual recruiting rankings and reputation, most pundits assumed that Gary Patterson could build a top defense out of complete scraps and they’d be fine replacing 2014’s nose tackle, top three linebackers, weak safety, boundary corner, and strong safety.

Well, those seven players combined in 2014 to produce 491 tackles, 53.5 tackles for loss, 12 sacks, 18 interceptions, 29 pass break-ups, and seven forced fumbles. All of them were also returning starters in 2014 that had been seasoned by multiple games in the Big 12 and under Patterson’s direction.

As Strong and Bedford will tell you, it’s a pretty big deal to lose all that production and leadership from your defense and then try to go deal with Top 20 offenses every week.

But that’s not even the whole story, TCU’s defense has been devastated this year by injuries and off the field issues. Only three starters from the 2014 defense are still going.

Here’s a look at their current defensive line-up: 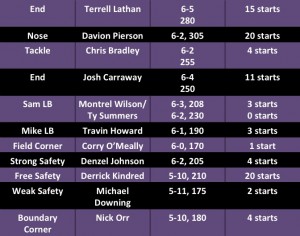 If I may point out a few things of note:

The TCU defense is designed to get the safeties involved in the action by frequently playing the corners on islands down the sideline, a practice that has often gotten them in trouble against Baylor but often results in them choking the life out of other offensive units.

Well, they lost rising star Ranthony Texada at field corner, a position they frequently isolate in man coverage, and now they’ve also lost their “weak” or boundary safety Kenny Iloka whom they would love to be able to use to either help the boundary corner or else be an active player against the run. Now they’re playing 175-pound Michael Downing there whom you can visualize as a quicker but also smaller and less confident Dylan Haines.

At linebacker the Frogs have been totally eviscerated. Freshman Mike Freeze was expected to bring a major athleticism upgrade to the position but he left campus taking a “leave of absence” after the first game against Minnesota. Now the Frogs are rotating a couple of converted safeties (Wilson and Howard) and a converted QB (Summers).

When they roll with Wilson and Howard at LB, the Frog defensive backfield averages 191 pounds across all seven positions…expect to see some double TE sets at times on Saturday.

The biggest problems for the Frogs are going to come in trying to bring help to the box to control the Texas run game without setting up someone to get burned by Texas’ speed at WR. Honestly, the Frogs are pretty much vulnerable across the defensive backfield to giving up a deep shot.

Perhaps the stoutest base coverage the Frogs can attempt in this game is to play their “robber” coverage to the field with a more conservative “cover 2” to the boundary: 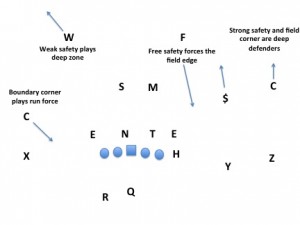 I imagine it’s starting to become clear how it was that Patrick Mahomes was able to throw for 392 yards on this defense last week while DeAndrew Washington ran for 188 more on the ground.

Texas can do some real damage by running some of their lead zone concepts from the two-back sets that have been causing serious problems for just about every opponent on the schedule. 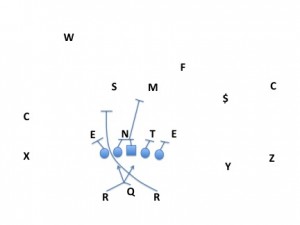 While neither Johnathan Gray nor D’Onta Foreman have been sensational runners, they’ve both been very good blockers. With this “boundary G” lead zone play, which is basically old-fashioned Iso with zone footwork, Texas can double team the nose guard and hammer the Frogs’ undersized linebackers. Next, Patterson will have to start making choices about whether to drop 175-pound Downing in the box and leave his corner on an island against Burt, Foreman, or Johnson or take his chances getting punished by the run.

If I know Patterson, he’ll choose the former option. He’s simply too aggressive at times and will opt for a dangerous shootout rather than trying to play it safe and daring a young Texas offense to work their way down the field.

There is one way in which this TCU defense can cause problems for Texas and that’s with its DL, which does have both quality and experience and also makes a living off executing line stunts of the sort that Texas has struggled with over the last couple of years.

Losing Kent Perkins came at a rough time for this offense, but they are facing a very manageable opponent this week. Provided they get solid play at right tackle, Heard and company should light these Frogs up much like Case McCoy did the last time Texas traveled to Fort. Worth.

This is the real challenge of the game and undoubtedly where Strong will focus his own personal attention in preparation for what might be the biggest game he’s coached in at Texas.

The Frogs are good at hitting different parts of the field on offense, and it so happens that getting enough numbers to defend every spot simultaneously is very difficult.

First you have to deal with Josh Doctson, the 6-foot-3, 195-pound outside weapon, who popped Tech for 18 receptions, 267 yards, and three touchdowns. As Quandre Diggs will attest, Doctson is difficult to handle on deep jump balls due to his size and body control when going up to get it.

He’s also become very precise running routes underneath, making him a complete weapon that most of the league simply isn’t going to have a good answer for. I note here that Peter Jinkens was an absolute sieve in underneath coverage against Oklahoma State and that Texas’ LBs struggle to support the secondary well in coverage might be one of the biggest challenges this team faces in the coming weeks.

The next problem in defending the Frogs comes against their running game, which is very good and often supplemented by Boykin’s own athleticism on concepts like zone read and speed option. They’re probably at their best running outside zone but they’re also quite capable at thundering downhill on inside zone thanks to their combination of big guards (each 6-foot-4, 320) and their quick and highly experienced center Joey Hunt.

UT’s plan for winning this game needs to accomplish two things: they need to run the ball and score lots of points on offense, and they need to control Josh Doctson.

If the defense can keep Doctson and the Frog passing game from lighting them up, there’s good reason to believe they can control the game and win a high-scoring contest. So how can they accomplish that difficult task?

First of all, they can’t afford to put John Bonney on Doctson, I’m going to re-iterate that Texas fans shouldn’t pile on Bonney or write him off but he’ll be way out of his depth in that matchup. He might be able to stay over the top of TCU’s other corner, Kolby Listenbee, who’s been something of a one-trick pony thus far in his career with track speed which probably makes him the fastest player in the conference.

It’s probably best if Bonney doesn’t play a major role in the game plan, which leaves Texas with a variety of interesting options. They could put the ultimate warrior (Kris Boyd) on Doctson and shade Dylan Haines over the top every time Doctson played on the boundary, they could permanently move Thomas outside to shadow him, or they could turn to Holton Hill who won’t give up length and size against him like most every other DB on this planet.

Perhaps they’ll end up doing all three, playing Hill as the field receiver and Boyd to the boundary while in nickel and playing cover 2 on the boundary when Doctson is lined up there with Boyd jamming him and Haines playing over the top.

Strong and Bedford are beginning to slowly mold this defensive roster into a unit that can make stops in the Big 12 by fitting role players into roles that make sense, integrating the younger athletes with upside, and hammering fundamentals. You can play good defense with mostly JAGs and role players if the pieces fit together and the team executes fundamentals that force the opponent to actually make plays.

One way that Texas accomplished this against Oklahoma State was by playing more base 4-3 personnel and getting Jinkens on the edge at Sam linebacker where he is more naturally suited. The challenge in playing this group is that it requires Jason Hall to be able to man up the slot receiver, but with the injury to leading TCU slot receiver Ty Slanina, perhaps this is feasible.

Texas will probably also play plenty of nickel alignments and bracket Doctson wherever he goes while spying Boykin with Hughes or Malik.

The only answer for the TCU run game will be to tackle well as a team and hope for another dominant Hassan Ridgeway game. As solid a player as Hunt is, Texas could much up the works by lining Ridgeway directly across from him in the 3-3 and forcing the Frog center to try and control him without good double team help.

The Frogs are going to score some points in this game but if Texas can force them to do it by running the football that is, however counterintuitive this might seem, the way to do it. Most Big 12 offenses lack the patience to pound the ball on the ground and often struggle to do it when the defense knows it’s coming. TCU has one of the more explosive running games in the league, but they aren’t used to relying on it to win shootouts and may not be patient enough to do so.

Texas may be 1-3 right now but they’ve played well enough to be 3-1 and have shown the offensive firepower and improvement on defense needed to be an absolute handful for every opponent on the schedule, much like Patterson’s TCU teams before they broke through in 2014.

A wounded Frog team playing in front of an 11:00am crowd could be the perfect victim to get the Longhorns going and affirm the confidence that is rising up in Charlie’s young team.