By: Ian Boyd and Eric Nahlin

For the rest of the year Texas is going to rely on two things to do the heavy lifting for the offense: space and speed.

You can’t be terribly complicated on offense when your best player is Daje Johnson and you have a freshman starting at outside receiver, left tackle, right guard, and quarterback. From here on out, Norvell will be aiming to keep things simple for Heard and allow him to make quick option reads that get the ball into the hands of fast people in space, including himself.

Texas has enough speed that this could work reasonably well against many opponents and should definitely allow better offensive performances than the putridity that we’ve all witnessed over the last three games. If you just ask a defense to repeatedly tackle people like Daje Johnson or Johnathan Gray in space, you’re going to break 300 yards of offense more often than not.

Defenses are going to be intent on denying UT’s skill players the space they need to utilize their speed and that means that Texas is going to see a great deal of this in 2015: 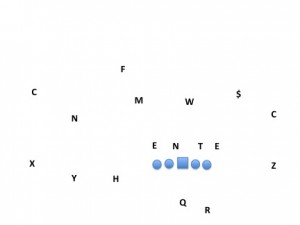 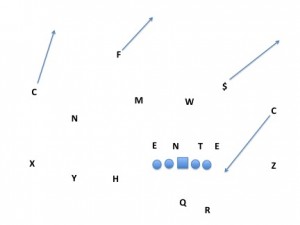 Teams are going to widen out to deny space to Texas’ skill players and make up for it by planting safeties in the box to control Jerrod Heard in the QB run game and they are going to frequently attack the OL with stunts and blitzes.

For Texas to successfully spread teams out well enough to allow its team speed to come into play, they’ll need two things from this offense.

First, they need Heard to recognize defenses well enough to be mostly correct about where he distributes the ball and well enough to avoid turnovers. He can make mistakes at times and the speed and juking ability within his own legs or in the legs of Gray or Johnson is going to bail the Horns out. A mistake that turns over the football is another matter.

Secondly, this offensive line needs to be able to punish teams that widen out their linebackers and attack the edges by blowing holes open in the A and B gaps in the middle of the field. That’s going to mean handling stunts designed to foul up Texas’ inside zone schemes and successfully reaching the inside linebackers.

You can expect Rice to park their “strong” and “kat” safeties on the edges and make regular use of blitzes and tackle stunts to try and allow them to leave the middle of the field undermanned. If they pull it off and Texas can’t make them pay, it’s going to be a long, painful season.

If it works to an extent and the Longhorns’ team speed just overwhelms them, then there might be hope for a winning record.

If the OL blows open holes up the middle that necessitate that Rice leave WRs open in space and Heard shreds them with sharp decision-making, Texas might have something this year and Watson is going to be made to look very bad. I’m betting on scenario two. – Ian Boyd

If Notre Dame came at a bad time – and frankly there wasn’t going to be a good time – then Rice arrives at the opportune time for the young and disjointed team to heal, but that’s not to say the Owls are a poor team. They are not, and I bet head coach David Bailiff has his team believing they can win.

Bailiff is a high character man who, if younger, would be a guy ticketed for a bigger job. He recruits a combination of gritty maximizers, undersized athletes who can move and bigger athletes who are skillful, but not exactly world beaters.

Before we dig deeper into Rice, let’s take a quick look at the mess that is Texas.

Last week’s Cover-2 was poorly executed but I’m still not too worried about the defense. What I think happened was Vance Bedford over-estimated his defensive line after going up against the Texas offensive line for a month. The net result was Notre Dame’s very good o-line providing Malik Zaire all day to carve out the Texas zone. Nothing better indicates how poor the Texas o-line is than Bedford not getting a quality indicator of his d-line after a month of practice. I do think these guys will be fine, however.

We’ve mentioned it numerous times but some still don’t hear it; Texas ran a multiple offense so there are phases of spread intermixed into the playbook. There are elements that are ideally suited for Jerrod Heard to experience success if he gets any help whatsoever from the offensive line and run game. There is also overlap with what Jay Norvell has called in the past, mainly zone read and a varied screen game. If successful, zone read will get Heard into a game rhythm and screens and quick game will get him into a passing rhythm. If successful. If. Successful. Quality coordinators go into a game knowing what plays to call to settle down their quarterbacks. Let’s see if Norvell can accomplish this against a team with a vast talent deficit.

The Owls went 8-5 last year and 10-4 the year prior. In its 2014 opener, Rice faced Notre Dame and gained 367 yards, or 201 more yards than Texas labored for last Saturday. They then went on to run all over Texas A&M, which doesn’t say a whole lot because the A&M run defense was poor, but it says a little.

You’ll like the Rice offense. You’ll wonder, “hey, why don’t we run that offense.” Rice runs predominantly 11 personnel (will run some 10 as well), with quarterback Driphus Jackson often operating as a second running back. He’s a 5th year senior and, yes, he’d be starting at Texas. The Cedar Hill product is smart with the football, has enough arm to hurt you and is a good leader. He’s also an instinctive, tough runner.

Rice will run the ball from many looks, often times the tight end is out wide and cracks inside, other times they motion him in to block in-line. They employ a speed option game (think TCU) and from that they’ll run play action and take a shot. Safeties beware.

Like Tiger Woods has a type (blondes) so too does Bailiff with running backs. Namely, he likes pin-balls. Guys who are built low to the ground, with good size/strength and balance. Former teammate of Ricky Seals-Jones at Sealy, Jawon Davis, epitomizes this best at 5-foot-7, 195 pounds. Kid is HUGE and a solid back. They also have Darrick Dillard and two guys I really liked in high school, Cy Woods’ Samuel Stewart and Crosby’s Austin Walters.

The offensive line returns two starters but the guy I really like is redshirt freshman Calvin Anderson from Westlake. He’s light at this point, but very athletic. He was easy to spot in the Owls’ opener. I expect him to get worked some because of size and youth but I wish he was on the Texas roster. Only one Owl offensive lineman is over 300 pounds. Texas should beat these guys up.

The wide receivers are largely unproven but they boast good size. There isn’t a single one under 6-foot-0 on the depth chart. Some last names will be familiar to you here in Temi Alaka (Otaro’s brother) and James Mayden (Jared and Jalen’s brother).

Rice lost defensive tackle Christian Covington to the NFL Draft (6th round pick of the Texans) and all conference defensive end, Brian Nordstrom, to the corporate world. That leaves the Owls with only three returning starters for its 4-2-5. From what I saw, Rice ran a lot of Cover-4.

The strength of the defense is the linebackers with former Desoto star Alex Lyons leading the way. They’re fast, decently athletic (no bigger than 225) and smart. Run at them. Climb to the second level and put a big hat on a little hat.

Bailiff has done well to let his big guys redshirt and mature. Because of that Rice’s interior d-line has some size at 295+. The defensive ends are young and still undersized. They didn’t jump off film to me.

The secondary is replacing a lot but the current crop played quite a bit last year. You’ll see another familiar last name in Zach Espinosa, Dom’s younger brother. From what I’ve seen of this grouping they have some ability.

Rice played Wagner in Week 1 which I’m pretty sure is just a website and a football team, so putting stock in what they accomplished (400 yards rushing) is folly, but how they accomplished it should be a bit more clear. Jackson is the straw that stirs the drink, much like Zaire last week. Shut him down and Rice is done. Let him operate within the pocket and give him space to run and they’ll hang around.

Obviously all eyes will be on who QB1 is for Texas and what kind of help he gets from his offensive line and from the booth. – Eric Nahlin