With only four wins in the standings and two games left on the schedule, Texas has to be all-in to doing whatever it takes to win these final two contests. Under Kliff Kingsbury, Texas Tech is generally the team that looks to play the spoiler at this time of year, though not typically for the Longhorns, and they’ll be coming into DKR looking for their seventh win of the year.

The Longhorns are currently favored at -1.5, no doubt because of Tech’s abysmal run defense and the fact that the game will be on Thanksgiving day at DKR where Texas is theoretically less likely to lay an egg. However, a glance at big picture numbers show that Texas has a tough challenge ahead.

The teams seem pretty comparable in every respect save for one glaring difference, the Red Raider offense has performed at an elite level this season while Texas has not seen great play on either side of the ball. 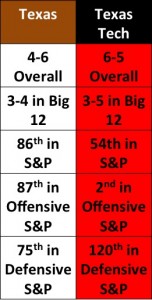 On offense they’ve been vulnerable only to teams that can play effective man coverage against their WRs (West Virginia and Oklahoma), while the defense is vulnerable to anyone that can run the ball.

Hopefully Texas can mimic each of those takedowns and finish the season above .500 playing at home.

David Gibbs’ defensive system is somewhat similar to that of Charlie Strong and Vance Bedford in that he likes to create 5-2 fronts and three deep zone coverages but he’ll move his players around in different places to create those looks as he attempts to confuse opposing quarterbacks and create turnovers.

Tech’s problems stopping the run in this defense have been similar to those experienced by Texas. They’ve lacked a box safety or inside linebacker capable of playing the run well enough to make this system work properly. The Raiders ended up relying on Jah’Shawn Johnson, a 5-foot-10, 176-pound redshirt freshman, to play the role of box linebacker. As much as he struggled in this task, his removal late in the game against Oklahoma State left the Raiders utterly hopeless in stopping the ‘Pokes from putting 70 on the scoreboard.

Inside linebackers Micah Awe and Dakota Allen lead the team in tackles but flip on the tape and you’ll see that these are largely of the “chase runners downfield” variety and the numbers more a result of repeated opportunities than real production.

Particularly with power puller specialist Patrick Vahe out, the Raiders will probably be most vulnerable to outside zone plays that blow open large creases that their safeties and linebackers are not adept at filling with leverage. The plan for Texas in this game should be as obvious as it was against OU, to run the ball with Heard as many times and in as many ways as possible.

They can combine outside zone and Heard easily enough with something like this: 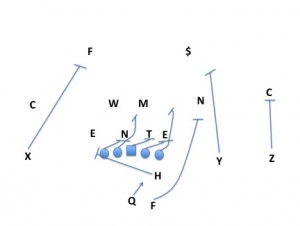 In this illustration Texas doesn’t even field a running back, which the roster is missing anyways, but instead has the QB (Swoopes or Heard could both excel here) paired with a pair of blockers in the backfield and then three receivers out wide.

Texas is going to want to give the ball to their running backs, probably as many as 25 times, but there’s no reason to believe that Tech will be capable of defending 18-wheeler type plays like the one above so the staff would do well to cycle through either QB and give them each 10-20 carries while just bashing away at the Raider front.

This would also have the obvious effect of running clock, helping to avoid negative plays, and keeping the Tech offense off the field.

If Daje wanted to have the game we’ve all been dreaming of where he goes for 400 total yards, this game would be a great time for that to happen. Sweeps or tosses to the scatback attached to inside runs could be devastating for the Tech defense. Kirk Johnson’s ability to cutback against the grain makes him the best candidate to have a breakout game against a Raider defense who’s greatest weakness is closing cutback lanes.

The Red Raiders have four players on their offense that are excellent at creating explosive plays beyond the design or blocking on a given call.

There’s little 5-foot-6 Jakeem Grant, who’s one of the fastest slot receivers in the country, the two backs DeAndre Washington and Justin Stockton, and then QB Patrick Mahomes. On any given play-call, the Raiders will usually force opponents to deal with at least two of these players in space at the same time.

One way this works is with RPOs that ask you simultaneously how you want to keep Washington (1282 rushing yards and counting) corralled without getting ripped by Grant or Stockton running quick routes or perimeter screens. One nasty way they’ll work these two goals together is with a tackle-lead play that uses future pro tackle Le’Raven Clark as the lead blocker combined with something like a Stockton RB flare screen: 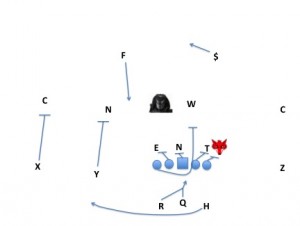 Texas is better off against many of these plays than other teams because they’ll drop a safety to the passing strength, play man coverage, and allow the linebackers to stay in the box to defend the run.

Nevertheless, expect Tech to make Texas prove they can actually beat blocks and make tackles on these guys in space and not just on the chalkboard. They’ll also use misdirection and motion to try and catch Texas’ safeties mid-adjustment or to try and force a Jinkens or Haines into man coverage on Grant or another dangerous WR.

When they turn to 4- and 5-WR formations it should be interesting to note whether Texas matches in dime or stays in nickel, and if they choose nickel, whether Peter Jinkens plays coverage like he did against Sterling Shephard in the Cotton Bowl or like he did against Kavontae Turpin in Fort Worth. Since it’s Senior Night, we should probably expect to see him stay on the field and might as well hope for the best there.

Finally there’s Mahomes, who’s one of the most dangerous spread QBs the league has seen yet, he’s just been overshadowed by the success enjoyed by the league’s other QBs who play with average or better defenses.

Mahomes’ specialty is buying time with his legs before finding receivers downfield, much like OU’s Baker Mayfield only with the ability to throw deep bombs while on the run that put tremendous stress on a defense.

An example from their last game against Kansas State:

With Mahomes at QB, every given play has a chance to be one where your defenders chase the Raiders around for five seconds only to see Mahomes rocket the ball somewhere it should never be able to go. Boykin has a similar quality that reared its head repeatedly at exactly this time last season in DKR.

Last year, Texas treated this problem with a three deep/four under/one spy defense that had Hughes monitoring Boykin or Jake Waters and keeping him from buying time forever. Obviously Hughes or Malik could be the spy and repeat this trick against Mahomes.

Texas had a lot of success against OU and Mayfield without spying the Sooner but they also got a lot of free rushers in that game with their blitz package. The Raider OL is a much tougher unit with a senior left tackle, upperclassmen on the interior, and an average height across the board of 6-foot-5.

If they can’t get free rushers to help keep Mahomes contained and under duress, then they’ll have to spy him while dropping deep zone defenders and hoping that Haines’ eyes and the length of Davante Davis and Holton Hill are able to negate his ability to improvise.

The Raiders’ have some good receivers in Grant, this year’s sneaky good white slot receiver (Ian Sadler), and outside guys Devin Lauderdale and Reginald Davis. They’re more of a committee type corps with Mahomes destroying you with whomever he happens to find open rather than a particular choice like TCU with Josh Doctson. The one exception is if they can get Grant running wheel routes on a linebacker or a seam-read on a safety, that can’t keep up with him out of his breaks. If Mahomes shreds Texas in the passing game, that will probably be a big part of how they do it.

All the indicators from these teams’ performances over the course of the year or over the last few weeks would seem to suggest that Tech is clearly the superior team. However, the fact that they can’t stop the run and Texas is a run-centric team throws a big monkey wrench into the machine. But then you remember that Texas’ best guard and the heart of its best running play will be out, as will the top two running backs…but then Texas can always rotate in a pair of athletic QBs and just run single-wing style concepts all day long…but will that be enough to match Mahomes’ output as he looks for payback for last year’s knockout blow?

You can go round in circles on this game for days but it probably just comes down to whether or not Texas has the confidence to go out and smash Tech in the mouth and impose their will on the game. If they do, Tech’s defense probably won’t allow them to keep up as they get weaker and weaker over the course of the game. If not, then it’s only a matter of time until the Raiders offense gets going and starts scoring points too quickly for Texas to match.

It’ll at least be an interesting game, Happy Thanksgiving.