Besides the question of how well Shane Buechele will take to starting as a true freshman and handling one of the brighter spotlights in America, there are a few other key questions that will go a long ways towards shaping the 2016 Texas season.

The Longhorns are young everywhere and will be relying on underclassmen at multiple key positions besides quarterback. Some of these guys are pseudo-veterans by virtue of having played as freshmen, but guys like Zach Shackelford, Collin Johnson, and Devin Duvernay will likely be asked to play big roles as true newcomers. Even some of the foundational “veteran” players like Davante Davis, John Burt, Connor Williams, Patrick Vahe, and Malik Jefferson are still going to have to step into roles and assignments in which they are pretty green.

All of that leads to questions about whether the young Texas roster will be ready to handle particular challenges and tactics from opponents consistently enough to move the Longhorns back towards the promised land. Here’s a few key personnel trends and tactical battles that will highlight some of the main challenges of winning with such an inexperienced squad.

P.J. Locke and the succession plan at nickel

The nickel position can be a tricky one in many defenses, not for the superior athleticism required to play it but for the superior versatility needed. A defensive back doesn’t have to be great in any particular role to play the nickel position well, but he does have to be solid or good in multiple roles to avoid getting targeted. For that reason, Texas has generally played some of their best all-around DBs in the position over the years.

Here’s a snapshot of the position since Texas went base nickel in 2008: 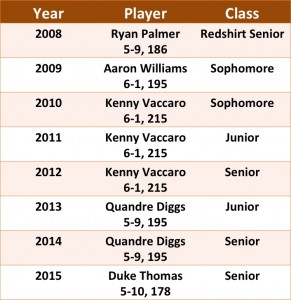 For the most part Texas has rolled with some of the most physical and versatile DBs on the roster to handle the position. There were years where the position was a timeshare as Earl Thomas played the spot some in 2009, Aaron Williams played there some in 2010, and Mykkele Thompson got some snaps inside in 2014. Yet even in those instances Texas tended to lean on key contributors to own the role.

Part of the challenge of the position is mastering the quick game routes that slot receivers run, understanding the run fits, and learning how to blitz. There’s a lot of knowledge and technique needed to get a good grip on all of that info and opponents will not hesitate to attack an inexperienced slot with trickery.

There’s a reason that John Bonney’s start in the nickel against Texas Tech saw him make nine tackles, the Raiders went after him all day long:

P.J. Locke got the start at nickel in the last game of 2015 against the Bears and had seven tackles but in a very different style of game. Baylor couldn’t execute the passing game to save their lives in that contest and Locke’s duty was more to make the tackle on screens and force the run. He showed pretty well in that role, losing the edge at times but also producing this game-changing play:

Now that might have actually changed the game to Texas’s detriment, since the single-wing offense that Baylor played the rest of the game proved more potent than its normal offense when executed by Chris Johnson. However, you a similar play by erstwhile nickel Quandre Diggs might have saved Texas’ bacon in its 2014 showdown with Patrick Mahomes in Lubbock. The nickel making a blind side hit on the QB after he pulls the ball on a zone-read is nightmare fuel for a Big 12 offensive coordinator.

The bigger question is not whether Locke will perform against the run but how he’ll do in matching routes and avoiding targets like Bonney saw against Tech in the clip above. Coaches rave to people close to the program about Locke’s work ethic so there’s good reason to believe that the true sophomore can handle the role mentally. If he shows well when matched up with slot receivers in coverage then Texas could be in good shape at the position for 2016 and the foreseeable future.

When Jake Raulerson transferred (ultimately to Arkansas), it really left the Texas O-line in a lurch. The succession plan here was to finally roll with Raulerson as a redshirt junior while Shackelford and whomever else were developed to replace him. It might have been 2018 before Shack was called upon to snap the ball for Texas.

Now he’s it, unless Elijah Rodriguez or Jake McMillon unexpectedly seize the spot, and Texas will be leaning on a true freshman to both snap, throw, and catch the football on a disturbingly large number of snaps next season.

The key here will be to set up Shack for success both in the run game and in pass protection so that opponents can’t target him and ruin either without cheating extra numbers into the box. The veer and shoot does depend on being able to reliably block five defenders with five blockers. The simple arithmetic/geometry of the system doesn’t work with that as a variable rather than a given.

On the base inside zone runs, it should be relatively easy to keep Shack from getting blown up by stud nose tackles on opposing teams. The design of inside zone is such that you can basically always double team the nose with the center and a guard and it will work fine, although it can become truly dominant if the nose doesn’t need any help. Alabama’s run game over the last several years has been built around fielding centers like Barrett Jones, Ryan Kelly, and now Ross Pierschbacher who can do exactly that…but I digress.

The power and counter runs that Texas executed so well last year are trickier to execute without leaning on the center. The easiest path to protecting Shack would be to always run these plays at the 3-technique so that he could block down on a nose rather than having to reach all the way to a 3-technique. In the latter scenario you’d worry about the DT using all that space and time to put a move on him and blowing up the play from behind.

Running power at the 3-tech is harder for the H-back, who probably now has to execute a kick out block rather than a lead block against the Over fronts played by most of the league, and it’s harder to get the offensive tackle downfield to block the weakside linebacker as well when he has to start by doubling the 3-tech, but the center has a straightforward task: 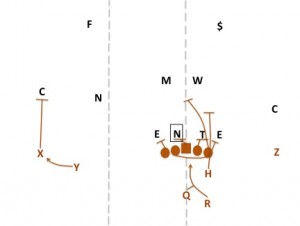 Power and counter are easier to run at the nose tackle, but then you have to worry about whether the center can get wide enough with enough anchoring to actually screen that backside 3-technique: 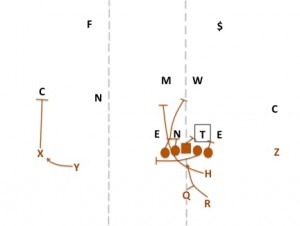 There’s another solution that Texas showed in the Spring game, which simplifies all of this a great deal for Shack but it requires utilizing the QB in the run game. That solution is to option the backside defensive end and double team both tackles: 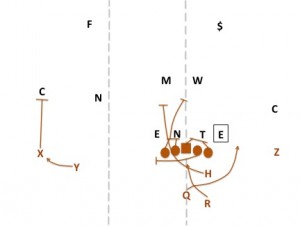 If Texas is willing to let Buechele take a few hits per game running this as an option play against teams that have DTs that scare them against Shack then the problem can be solved very easily with this play design.

The biggest issue is in pass protection, where the freshman is facing a likely barrage of isolation techniques and blitzes designed to send guys darting past him into Shane’s face. This can be mostly solved if they can move Kent Perkins inside so that the coaches can send help to double-team any particularly dangerous interior pass-rushers.

We’ve been talking at length about how adding a player in the slot who can burn teams by running past them either before the catch on a deep route or after the catch on a quick screen can really open up this offense. Texas probably found that guy in Devin Duvernay if not also Jerrod Heard.

That means that the best way for opponents to handle Texas’ basic, spread-I sets will be to play conservative with the nickel, drop the boundary safety as close to the box as he needs to be to play the run effectively, and to give Burt/Johnson a big cushion on the boundary: 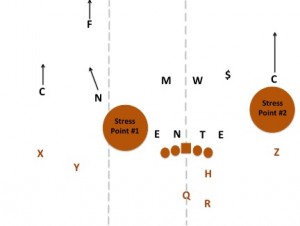 There are two weak spots to this defense (noted with the bubbles) and potentially a third depending on Texas’ young WRs’ skill with double moves. The first soft spot is runs to the field, which the nickel can’t defend as aggressively because he’s first denying the quick bubble to the slot. Teams can handle that with aggressive play from the middle linebacker though thanks to the boundary safety filling behind him.

The second is underneath the soft cushion throwing quick hitches to that “Z” receiver. You can bet that many opponents will take their chances on their corner and boundary safety making plays on the ball or making the tackle on John Burt or Collin Johnson in that space rather than playing cover 2 and risking Forewarrened building up steam to the second level.

There’s also the question of whether that boundary corner can rely on that cushion to prevent him from getting beat deep over the top by a John Burt double move or jump ball to Collin Johnson. If not…well there’s not much else the defense can do so they’d better hope he can.

These are some of the questions facing Texas that they’ll be working on this offseason to prepare for the coming year. The staff and team know what’s up and what needs to happen for them to be able to get after opponents in the fall so it’ll be fun and interesting to see how the young veterans on this team look when it comes time to execute with the eyes of Texas back upon them.