The Rice and Cal games were always going to be very informative in giving us a good glimpse of what kind of team Texas was going to have in 2015. It’s no surprise that a fairly tough non-conference slate has provided such a clear picture of who this Texas team is, but the picture is frankly quite shocking.

The offensive coordinator was changed, and while the playbook has only been shrunken down, the approach and philosophy is completely and totally different. The defense has looked very different from 2014 with a much more conservative approach to coverage and some run defense outcomes that make clear how much Texas misses Jordan Hicks and Steve Edmond at linebacker.

Things aren’t about to get any easier with Oklahoma State, a trip to face TCU, and Oklahoma in the RRS all coming over the next three Saturdays. When previewing the schedule I prognosticated that Swoopes might not survive this brutal stretch, but it’d be nice if in 2016 Texas could get through more than one football game without losing its returning QB starter to head issues.

It’s unlikely that UT will come out of this stretch at .500 or better, but given how much more this team is likely to get over the course of the season, navigating through these next three games at 2-4 still leaves good hope for a bowl eligible finish.

The state of the Texas football program heading into conference play is one of a team that has discovered an exciting identity on offense and still searching on defense. I don’t think anyone expected that, but even if that means finishing the first half of the season 2-4, I suspect most Texas fans will take it.

State of the offense

The offense has a very clear identity and direction now, and all of a sudden we are noticing something rather interesting about this group. They are fast.

When Texas is in sets with Heard, Daje, Burt, and Foreman on the field, they have a lot of ways to generate explosive plays, which is the stat that most directly correlates to winning football games.

As Rice found, you can beat on Texas all day with highly efficient play and they can still dominate you on the scoreboard because it only takes one missed tackle on Daje Johnson, one coverage bust on John Burt, or one bad angle against Jerrod Heard and you’re hearing “Texas Fight” from the horn section.

Norvell has achieved this result by embracing a “3rd generation” style for utilizing a dual-threat QB in which the goal is to attack as many parts of the field as possible with as few concepts and reads as possible. The beauty of this style is that it matches what Heard did in high school, can be utilized with the existing Texas playbook, and makes it very easy for the Longhorns to get their speedy, young talent the ball.

Texas used three vertical passing concepts over and over against the Bears, two of which were designed to present Heard with a “throw deep or run” decision-making process and the third of which did the same but also attacked a flaw within the Cal defense.

That Cal-beater was a simple “four verticals” play that picked on both Cal corners for their failure to respond properly to a wheel route from the #2 slot receiver. 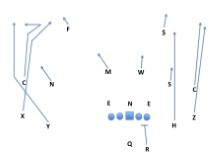 Cal was playing a four-deep/four-under quarters coverage here to try and keep zone eyes on Heard while also accounting for all the deep threats. It’s becoming increasingly popular to drop eight defenders into coverage as a means for dealing with spread offenses that can overstress traditional, seven-man coverage schemes and that was a big part of Cal’s strategy for handling Texas.

The problem here was an assignment bust by the corner, who tries to carry the receiver he’s covering into the safety and didn’t use his eyes to make sure that the slot receiver wasn’t entering into his zone of responsibility. If you’ve watched how OU attacked Texas’ defenses in the Norvell era in Norman, you know that Jay spotted this failure from film study and came into the game intending to mercilessly pick that scab.

Texas went back to that well shortly afterwards and again found Daje all alone on the sideline:

Heard has a pretty easy job here, he’s not making any lightning quick reads and he has all day to throw thanks to the fact that he’s only facing a 3-man rush. By forcing defenses to simultaneously account for deep threats and Heard’s legs, Norvell is finding ways to get Daje in space down the field.

When an offense is constructed in ways to allow different skill sets to play off each other, then all of a sudden “limited” athletes become easy to incorporate into the game plan. Daje had 145 yards on five catches against the Golden Bears.

The Texas run game also found something against Cal with Wickline’s “lead zone” play, which is basically old-fashioned “Iso” with zone blocking principles. Gray and Foreman have both proven themselves to be capable lead blockers and the design of the play is such that the OL simply have to be able to turn a DL’s shoulder rather than getting low and driving people off the ball.

Oklahoma State is going to try and muck up the works for the UT rushing attack by dropping safety Jordan Sterns into the box and making Heard prove he can beat man coverage outside with Burt or Foreman.

Both John Burt and Armanti Foreman were able to run comeback routes against deep corners in the Cal game and Heard hit them in rhythm:

These are some of the most difficult throws for defenses to stop and beating Oklahoma State will depend on Texas executing passes like this against a good group of Cowboy cornerbacks.

State of the defense

The Horns defense has not yet established a schematic identity to hang their hats on that can allow all of the role players on this roster to come alive. Much of the problem can be summed up by the fact that with Hassan Ridgeway working his way back into shape, the UT defense really only has one well-rounded, standout veteran to try and build around, corner/nickel Duke Thomas.

John Bonney always shows good awareness and tackling from the nickel position, but outside he’s overmatched when facing good outside receivers of the sort that are all too common in the Big 12. On the opposite end, Texas has gotten solid play from Antwuan Davis and promising play from the freshmen, but nothing special.

None of the safeties have shown anything special and some of them haven’t even been particularly effective as role players. The dream of using Jason Hall as a weapon underneath while Dylan Haines cleans up on the back end is dead.

As our resident coach @UTexasFootball has repeatedly noted, Texas lacks a true mike linebacker to pair with Malik that can allow the Predator to go hunting as often as we’d like to see. This is a problem because the DL lacks pass-rushers that put any fear into opponents save for the occasional snaps where Ridgeway is feeling it. If Malik isn’t blitzing, this defense will struggle to bring pressure.

Speaking of Ridgeway, he’s also the only DL on the roster that can command a double team and protect a mike-less linebacker corps.

There might have been hope from a defensive approach that utilized Malik and Edwin Freeman’s athleticism at linebacker to create negative plays with blitzing while playing smart, conservative defense elsewhere on the field but now Freeman is going to be out for 6-8 weeks.

So what’s to be done? How can this defense establish an identity that will allow them to get stops against Big 12 offenses?

This defense does have three traits that can allow them to setup the young talent and older role players for success. They have a corner that can play coverage without safety help, a tackle that when healthy can command a double team, and a versatile freak athlete.

Here’s how those resources can be deployed. They’re going to have to trust Thomas outside at corner in man coverage, hope to find another corner that can hold up more often than not, and manufacture four-man pressures while doing all they can to force opponents to play left-handed.

For instance, here’s the kind of call Texas was regularly rolling out against Rice to create 3rd down situations: 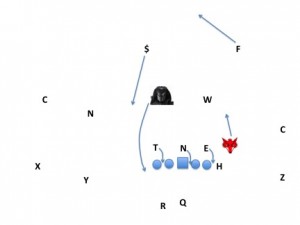 That’s just a standard Under front with Poona Ford and Malik becoming the backside 3-tech and weakside defensive end while Ridgeway and Shiro Davis handle the roles of commanding a double team and holding the edge to protect Naashon Hughes and Peter Jinkens.

Texas can drop the safeties to help simplify run fits and to help double troublesome slot receivers. The goal from now on should be to creatively generate pressure without committing too many blitzers and then use fundamentals and the extra defender to try and make the offenses adjust.

As soon as Texas can focus on getting role players in positions where good fundamentals and smart game-planning are setting them up for success, then you’ll start to see this look more like a confident, Charlie Strong defense.

With more cover 3 schemes and four-man pressure combos, the Longhorns should be able to put people in 3rd-and-long often enough to have a chance at forcing punts. On 3rd-and-long, Texas could really benefit from finding another pass rusher to help get pressure and keep opponents from playing “whack a mole” with Malik. Charles Omenihu and Derick Roberson need to start getting some snaps to show their wares because they’ll be needed against the offenses coming up on the docket.

Heard has breathed life into this program and Charlie will undoubtedly now feel freed up to focus on fixing his defense with the confidence that what’s happening in the offensive meeting room won’t cost him his job. This team won’t be a real contender for the Big 12, but they are going to show some flashes.

If they can figure some things out on defense against Oklahoma State while continuing to show the ability to attack different defenses with speed and precision, then the next stretch of games should be pretty entertaining.