The ideal composition for a defensive depth chart is to have athleticism outside and experience in the middle. Everyone wants to have experienced and athletic players all over the field, but while a defense can get by with young athletes in space, they can’t really get by with slow players.

Similarly on the inside, everyone wants explosive tackles, linebackers, and safeties, but it’s essential that players inside can diagnose plays and get in position quickly. Speed is useful but only if paired with that quality.

Texas’ great hope in 2015 on defense is that its secondary will have a strong year thanks to the accumulation of great athletes in the 2015 class combined with the returning experience inside at safety in Jason Hall and Dylan Haines will create a combination in the secondary that results in good defense.

Hall and Haines, the scouting report

A year after Texas suffered from poor safety play and had few obvious candidates on the roster to fill a very important position in Charlie’s defense, both Haines and Hall emerged rather unexpectedly to play big roles.

Dylan Haines was the free safety in the nickel package, which snagged a big chunk of the Texas’ defensive snaps, and put up the following stat line:

Haines was initially a walk-on cornerback from Lago Vista that often turned heads with his play on the scout team. When Strong needed options at safety, they spun him down, gave him some snaps, and he quickly emerged as one of the best on the team.

Although he finished third on the team in tackles (behind linebackers Hicks and Edmond), Haines’ identity as a player isn’t that of a physical enforcer but as a cover safety and eraser on the back end.

His successful defense of 11 total passes testifies to his ability to run with receivers in the middle of the field, cover the seam routes as a middle of the field safety, and reliably make tackles from the back end. Haines lacks the range to be an impact player supporting the run from centerfield and he’s more a guy that will punish mistakes or jump tendencies due to film study than a guy that will make amazing plays on the ball.

Play good coverage underneath, and pressure the QB and Haines will clean things up with break-ups and interceptions. Ask him to be a big part of the run defense filling the alley or forcing runs, and he’ll be in position but he won’t shine.

Jason Hall was an underrated true freshman recruit with explosive downhill range and physicality that made him the clear option at boundary safety before Texas had even finished out the pre-conference slate. He put up the following stat line:

49 tackles, one tackle for loss (a sack), and two pass break-ups.

He started the year stronger than he finished it due to an injury. Early in the year he had his famous suplex against Samaje Perine in the Red River Shootout, but after the injury, Texas was lining up Haines closer to the ball. They were protecting Hall from regular action by giving him assignments out on the slot receiver or in the deep middle.

This allowed Hall to finish the year, but now it begs the question of what could be possible in 2015 if he can stay healthy and play closer to the ball as a box safety.

These players can complement each other quite well if Hall is healthy as Haines’ coverage ability can allow Hall to take the assignments that get him involved in stuffing the run, blitzing, or locking down the few tight ends in the league.

If Hall isn’t healthy you’ll have to wonder if a DeShon Elliott, Adrian Colbert, or another DB might have a chance to have a big role in 2015.

Getting the most of Hall and Haines in 2015

Texas really has five main coverages that they relied on in 2014 for snuffing out Big 12 offenses; two main types of cover 3, cover 6, the fire zone, and a max coverage call. The safeties are important in each of them.

The main structure that defines every Texas scheme is having three deep pass defenders and the safeties often only account for one of those three players.

First we have cover 3 with the boundary safety rotating down: 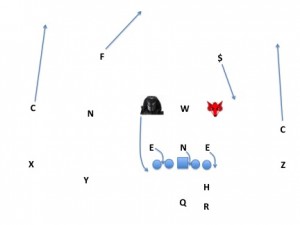 The safety becomes the force defender, picks up the #2 receiver (counting in from the sideline) in coverage, and is close to the action. The free safety to the field side rotates into deep coverage. This is the ideal rotation for Texas as it gets Haines in deep coverage where he’s most effective while allowing Hall to play closer to the line of scrimmage.

Next we have cover 3 with the free safety rotating down, typically a response Texas uses when teams play three removed receivers to the wide side of the field: 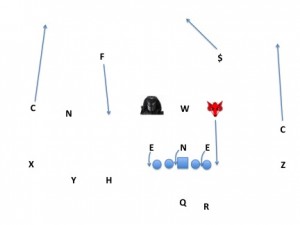 Now the free safety is another player near the action covering the #3 receiver while the weakside linebacker (or Fox) forces the boundary edge and the strong safety rotates deep.

Here’s where Texas could rethink whether they want to delineate Haines and Hall by field safety vs boundary safety or as strong safety vs free safety. If they make Hall the strong safety and align him to stay with the fourth best receiver on the opposing team in nickel sets (nickel goes to the third best WR), then he could be the one to drop down in both versions of cover 3 while Haines is always the deep defender.

The only reason they wouldn’t do this is that their main change-up call to their different versions of cover 3 is cover 6, a quarters/cover 2 combination coverage: 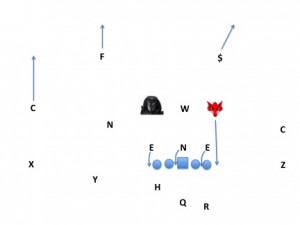 The boundary corner and nickel are now responsible for playing run force while both safeties are deep defenders with the free safety staying on top of the slot receiver while the strong safety is a deep ½ defender on the boundary. The defense still has three deep defenders in cover 6 but there isn’t a middle of the field safety like in cover 3.

You want the best coverage safety to the field in cover 6 so he can play over the slot receiver on vertical routes. Of course Hall is actually pretty solid in coverage, so this may not be a sticking point that prevents Texas from aligning the safeties to the receivers rather than to field vs boundary.

The next coverage that Texas makes frequent use of is three-deep, three-under Fire Zone coverage, which can look very different based on who’s blitzing. Suffice to say that either safety might be blitzing, dropping into the deep middle, playing over a cornerback, or replacing a linebacker in the middle of the field.

With Haines as the boundary safety Texas would sometimes bring that corner on the blitz and trust the former walk-on to play man coverage on the receiver. 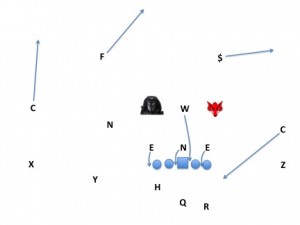 The main differences between a fire zone blitz and the variations of cover 3 is that there is one fewer defender in underneath coverage (three instead of four as there’s an extra pass-rusher) and Texas gets pretty creative with which players are filling which assignments, such as above when Haines plays the role of a corner.

The fifth main coverage Texas used in 2014 was to drop eight total defenders with three playing deep and five underneath. These are essentially the same as the cover 3 schemes with the strong or free safety rotating down except the defense gets an extra player helping play coverage underneath rather than helping to blitz like in the fire zone.

Between Haines’ ability to cover players in space (especially if his match-up is disguised) and Hall’s ability to bring extra physicality to the box, Texas can duplicate much of what they did effectively last year.

In the spring game, they also experimented with using Hall more aggressively, aligning to the fourth best receiver and playing down in the box before the snap: 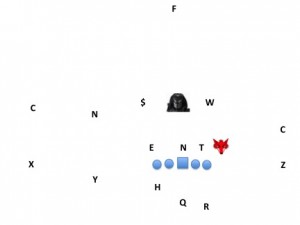 With Hall lining up so close to the action it creates opportunities for Strong to use him as a +1 player for attacking whatever it is that the offense is trying to accomplish.

This is essentially how Pittsburgh used Troy Polamalu back in the day and can be a dominating strategy if the rest of the secondary can allow it and the strong safety is a player that the offense has to start worrying about on every snap.

The Texas safeties haven’t been getting much ink prior to the season but if Haines’ coverage and Hall’s physicality allows Texas to get aggressive with the position the result could be an All-Conference year for Hall and complete domination over Big 12 opponents, especially the ones that are looking to spread the field in order to run the ball.

The future at safety for Texas

If Hall and Haines both have strong seasons in 2015, the future of the position is more Hall and Haines. Both return in 2016 with Hall potentially back for one more go in 2017.

Behind them the roster is chock full of players that have the potential to fill either role or fit into the overall Strong system. Davante Davis very well may stick at corner, but the 6-foot-3, 200-pound frame of “the silencer” could also grow into either safety position where his coverage ability and size could make him a dynamic player.

Kirk Johnson probably starts at running back, but he’s a big kid and a phenomenal athlete who could end up at any one of several positions before all is said and done, including DB. Kris Boyd will start at corner but the same is true for him. PJ Locke is probably a coverage safety or a nickel that is a willing tackler but not someone Texas would feature at either position.

Finally there’s DeShon Elliott, who could probably play as a box safety but might be best utilized as a free safety due to his range and erasing abilities. Elliott has the striking ability and coverage range that would make Haines a standout star rather than a very strong role player. Let’s all hope those two spend quality time together on the practice field and in the film room so that Elliott can benefit from Haines’ wisdom.

If everything goes according to plan, Texas will see the safety position go from being a dependable part of the formula in 2014 to becoming a source of play-making and identity in 2015 and 2016. They won’t lack for publicity then, I can assure you.