If Caleb Bluiett’s emergence at TE in the fall of 2015 was surprising after he’d shown so much promise at DE before hurting his knee, his subsequent season was downright shocking. The last time Texas had a blocking TE this good, the Cowboys were drafting him in the 7th round.

While we’ve spent a great deal of time bemoaning the lack of a clear answer at QB to do the shooting in Sterlin Gilbert’s veer and shoot offense, the coach did inherit the perfect player at tight end to veer into opposing defenses in the run game.

Great blocking tight ends are probably the modern game’s most underappreciated asset but they can have a considerable impact, especially in a league where some of the defensive powers start 190-pound middle linebackers.

Bluiett is unquestionably going to play a huge role in the upcoming season and I’m going to do my best to explain what it is that he’ll be tasked with doing and how Texas can develop the TE position in the new offense to have an impact in this league.

TE blocking in the veer and shoot

This offense is all about angles and moving blockers to the point of attack from other locations so that defenses which are spread out deep and wide by alignment will struggle to rally there in time to avoid getting blown away.

That’s much harder to do from four-receiver sets than from three-receiver sets that include an “extra blocking surface” TE that can be moved around to create angles and bring advantages to different parts of the defensive front.

Zone blocking with a lead insert produces a great deal more variety to attack the defense with and neither power nor counter work without an extra blocker unless the offense runs the play with a QB run option.

Texas could use the option with Swoopes or Heard at the helm, but these plays are only augmented if you add a dominant blocker to the equation while still spreading out the defense.

There are five main types of blocks that you want the TE to be able to execute in this offense to unleash the full run game complement and put the defense on their heels.

Not every TE is capable of executing all five types of blocks against every kind of opponent. Bluiett’s back-up, Andrew Beck, was not good in all five blocks but Bluiett was tenacious and effective in each one.

For Texas, perhaps the most important is the kick out block that makes power a workable scheme. The “power” and “counter” runs are essentially the same scheme with the same core elements.

The playside defensive end (or OLB) is unblocked while the OL double team the playside tackle and look to clear him out. Then the offense sends two blockers from elsewhere, one to kick out the unblocked end and the other to lead through the widening hole in between the kick out and double team and clear out the playside linebacker.

On power runs it’s the H-back, fullback, or tight end that clears out that DE while the pulling guard leads through the hole: 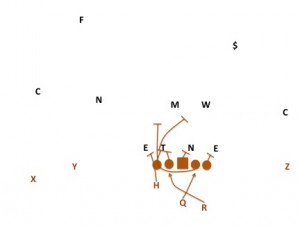 On counter runs the guard executes the kick out while the fullback or H-back leads into the linebacker: 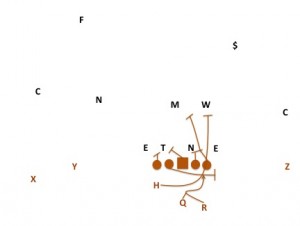 Sometimes, like on this example, you’ll see the RB take a step to the backside before cutting back behind the lead blocks. That “counter” action gave rise to the name of the play but the real key is the behavior of the pulling blockers and who handles the kick out and who leads through the hole.

It’s important that Texas have guys that can execute the kick out block or else you’re left running only counter plays and the defense knows which side the ball is coming (always to the opposite end of the H-back).

Beck wasn’t there yet in 2015. He could execute the lead blocks and his quick feet ensured that he always made contact with opposing LBs and gave them an obstacle to fight through in order to try and make the tackle, but he didn’t consistently move them backwards.

Executing base, trap, or kick out blocks was beyond his ability against Big 12 defensive ends, Beck struggled to get low and under their pads to drive them backwards.

Bluiett on the other hand…here he is executing a straight kick out block on K-State DE Jordan Willis, a 6-foot-5, 250-pound strongside end who had 15.5 tackles for loss and nine sacks a year ago:

To execute the kick-out block, an H-back either needs enough size and strength (at 6-foot-3, 270, Bluiett has that) to overwhelm opponents or the ability to get low and drive people like a traditional fullback (like Alex De La Torre did it at 6-foot-0, 243).

After the kick-out block, the next most important would be the lead block, the trap block, the combo block, and the base block in that order. If a player can execute the trap and lead insert block from an H-back alignment, Texas has a lot of ways to attack opponents from the “spread-I” formation pictured above with three receivers and an H-back/fullback on the field.

Here’s an example of the value of a good lead block in this offense: 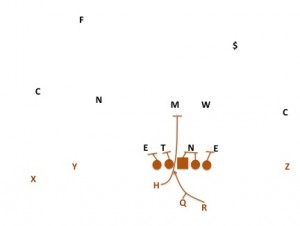 With the TE helping by picking off that mike backer the OL can take their time on the double team of the nose tackle before eventually working their way up to the backside linebacker. Without the TE helping they’d have to release someone up to the mike quickly and hope the weakside backer couldn’t get there in time.

Good execution of combo and base blocks allow the offense to line up in traditional single-back sets where they can double team troublesome DEs or get that TE down the field more easily to run routes in the seams. This is a lower priority in this offense behind ensuring the successful utilization of the various gap and inside zone schemes but it’s still useful for sending more receivers vertical or throwing to the TE on the goal line.

Texas has two problems with the current shape of the TE roster, which is very thin behind the senior Bluiett. The first is that they would really benefit from being able to play two TEs at a time since spreading out the defense only works if the QB can consistently make defenses pay if they don’t spread out.

It’s not clear that the Texas QBs will be able to consistently make defenses pay with the passing game and there may be times when it’s best to get more blockers on the field and just run the dang ball. However, if they don’t have another good blocker besides Bluiett to put on the field then there’s no longer any great advantage to be had.

The other problem is what happens if Bluiett is injured and the team is left without a TE that can execute the full complement of blocks that make the running game diverse and effective? Nothing good, that’s for sure.

This is a big spring for Beck, who needs to get much better and stronger at the point of attack. If he’s not going to be a good answer for the “what if the QB play is poor” or “what if Bluiett is hurt” questions then Texas is going to need to find another answer.

One possibility is Blake Whiteley, who wasn’t particularly good last spring before going down with injury and isn’t yet healthy. Another is true freshman Peyton Aucoin, who played this sort of bludgeon role in HS and has a lot of potential here down the road.

Finally there’s Demarco Boyd, who came to campus at 5-foot-11, 240 pounds, and has all of the physical and mental attributes of a punishing fullback. If Boyd could demonstrate proficiency in the kick-out and lead blocks then Texas could temporarily give up on using the “TE” like an actual TE and just play a fullback instead. Last we heard he was still working at linebacker, which also has a need for guys who are violent and capable at the point of attack, but he may be needed at fullback even sooner.

What if they can catch?

It’s been a while since the top TE prospects in the state were flocking to Austin for the opportunity to make hay in the Longhorn offense but here was a time when there was a revolving door of NFL TEs lining up for Mack Brown that stretched from 2004-2007. You could call it the “golden age” of Texas TE play:

In 2008 Texas had to replace Jermichael Finley a year earlier than expected after he went pro and it looked like they were going to pull it off but then Blaine Irby’s knee exploded into a million pieces in the mist of a breakout season. The position never recovered.

Texas hasn’t had a TE catch 20 passes or rack up 200 receiving yards since the “golden age” concluded and they’ve tended to miss on the top ranked TEs in the state. In fact, the last time Texas signed the top ranked TE in the state (by 247) was 2009 and it was Barrett Matthews.

Now Texas can still get fantastic prospects to develop into bludgeons to execute these key blocks for the offense, but what happens if they did land a guy that could burn opponents in the seams running routes, like 2017’s Major Tennison (Bullard) who’s currently committed to Texas.

If Texas lands Tennison he could be developed in the art of blocking from in-line and H-back alignments but it’d be a waste if they didn’t also use him in the passing game. To get the most out of his talent, Gilbert could just use him out wide in the same fashion in which the Patriots use Gronk, as a de-facto WR who presents matchup problems and a big target wherever he lines up on the field.

Tennison is fluid and quick enough to run vertical routes on opponents to just flex out wide if they don’t want to use him as an extra blocking surface in the box. If that becomes his focus they might need another TE or FB to specialize in the blocking game.

Texas has evolved this decade to feature bigger blockers at TE rather than seam-stretching targets and may be in good shape to have a new “golden age” of future NFL draft picks at the position. But this time, it’ll be a succession of big, punishing blockers.