Amidst Texas’ receivers in 2016, Collin Johnson was just one of many players that got some targets and produced in Sterlin Gilbert’s Veer and Shoot offense.

If there’s a criticism to be made of Gilbert’s efforts in 2016 it’s that Texas didn’t necessarily feature Johnson or any other WR in a prominent role within the offense, but then who would Texas have even featured?

It’s understandable that they didn’t zero in on a particular target.

The advantage that Tom Herman and his staff will have over Gilbert next season, besides having more staff dedicated to maximizing the offensive personnel and older offensive personnel to maximize, is that he doesn’t run quite as narrow a system as the Veer and Shoot. The foundational creed of the Herman smashmouth spread is to hammer the ball downhill with inside zone and power and then use shotgun spread formations to punish the defensive responses.

After that, there’s a great deal of freedom within the system to use whatever concepts or plays will make the most of the players on the roster. It can become an offense of “best practices” in a hurry with a diverse enough cast of characters. That’s good news for Texas’ WR corps, which includes some skill sets worth featuring with designed play calls. Collin Johnson may prove to be one of the most important pieces to the puzzle in 2017 that Texas will want to design different components of the offense to maximize.

Checking boxes in the smashmouth spread

There are three main boxes that a spread offense like Herman’s needs to be able to check off in order to ensure that they have answers for a given defensive strategy. The first and most important is being able to run the ball downhill on the base inside zone/power run schemes. We don’t really know yet who will carry the load there for Texas but it seems a reasonable bet that Chris Warren, Kirk Johnson, Kyle Porter, Toneil Carter, and Sam Ehlinger will get their shots.

The next box to check is being able to punish opponents on the perimeter with speed in space, “flex RBs” so to speak that receive the ball in simple fashion (a quick toss usually) and then do their work with the ball in their hands. Texas has a ton of players that can help punish teams by yielding space on the perimeter with every WR, Kirk Johnson, and even Shane Buechele (on option keepers) likely to factor in here.

Finally, you need to be able to respond when defenses match up across the board with the WRs, drop an extra man in the box, and dare you to beat man-to-man coverage: 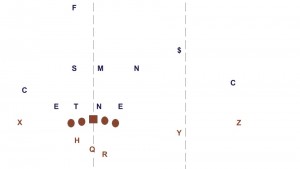 When that happens you need a true WR, a guy who’s skill set is about presenting an open target down the field for the QB to find in the passing game, not an athlete who’s lethal in space on the perimeter but lacks skill and expertise in attacking coverage.

Texas has a variety of players that could be really good in this role but Collin Johnson is probably the most promising and the most likely to be the difference maker when Texas faces the teams on the schedule that will make them beat coverage to win.

There’s about a 100% chance that someday people will be discussing Collin Johnson’s pro potential and his 40 time will be brought up as a knock on his ability. He probably runs something in the vicinity of a 4.6 but the crucial point is his quickness over short distances while standing at 6’6” and around 215 pounds.

Cornerbacks don’t come big enough to handle a guy with that kind of size and length, particularly if he has any amount of suddenness or good footwork over short distances to allow him the small margin of separation he needs to present a massive target to a QB. Footwork like this…

When you’re this big and have a catch radius like Johnson’s, all you really need is to create enough separation to give your QB a target and then your size and length is going to do a lot of the heavy lifting for everyone. Johnson gets it and his feet are quick and skilled.

Last year Johnson finished fifth on the team in receptions (but only six catches behind no. 1, Army Foreman), sixth in yards (only 105 yards behind no. 1 Foreman), and in a six-way tie for first place in TD receptions with three. He only had 6.4 yards per target, for reasons that will become clear in a moment, but down the stretch he became a favorite option on third down.

A very high percentage of Johnson’s catches looked like this…

…quick hitches, comebacks, outs, hitch-ins, or slants run on off coverage on the outside. The upside on throws like that depends on timing/accuracy of the throw, the short-area suddenness of the receiver, and the speed and leverage of the defense. Against Kansas State’s disciplined and fairly athletic defense he had four such catches that generated 22 yards. Here’s an example of the upside that Johnson can bring on plays like that (besides being an easy target)

K-State’s CB DJ Reed comes in too high and too late (thanks to a better-timed throw from Buechele) and the “running in sand” conditioned footwork and “215 pounder in space” factors start to show up in a hurry. Most of the time the Wildcats were able to fight him to the ground before he did much damage.

Perhaps the more exciting ability that Johnson brings to the table is his ability to stretch the field and guarantee some space to work in underneath:

On this play he’s running a corner route (he scored twice running this route on Tech) which is designed to offer an advantage to the WR because he gets to break outside when the main concern for the defense is taking away an inside release. That said, his footwork and the spacing makes it easy for him to get separation and then he’s a big, easy target to hit that can go up and get the ball in the air. He was open in an instant but then could still bring the ball down when it came a bit late and behind.

A truly reliable “we need a first down and they’re playing man coverage” WR needs to be able to threaten to take the top off the defense or else he’s not going to find much room underneath to work in. Collin Johnson’s ability to break off routes could translate to a wide variety of routes on the tree that could make him a nightmare to account for, particularly on run downs when teams don’t want to yield numbers in the box.

The fact that he has some acceleration and strength to turn a hitch or bubble screen into a gain is a major plus.

The first question with Johnson is whether or not he can expand his command of the route tree to make the most of an offensive system that won’t relegate him to running mostly fades or hitch-ins, I think it’s a safe bet that he will.

The Herman passing game is one that also includes a lot of adjustable routes on the perimeter for the WR and the nature of all run-centric offenses is such that any WR that can run a variety of routes is going to find favorable opportunities to do so.

If you glance at just an individual passing game concept in this offense it’s clear that there’s a big onus on the outside WRs to be able to adjust after the snap and run routes. When a blitz comes, a QB can respond in one of two ways. If he knows the total system and has truly identified the structure of the blitz he can try to send the ball where he knows his man is at advantage. If you’ve got underclassmen QBs and a 6-foot-6 WR that can be trusted the much simpler and more common response is to throw the hot adjustment to that guy and hope for the best. If you can force a defense to have to double a guy on a blitz then you’re pretty far ahead of the curve.

Texas was terrible against the blitz last year, partly because of a lack of development in the passing game and partly because the right side of the OL was a sieve. Increased chemistry between Shane Buechele and Johnson, and comfort with the hot routes and adjustments in this particular passing system could be a big part of the solution.

It’s a badly needed solution because Texas needs to improve in the passing game both to make the most of the talent on the roster and also to avoid getting attacked like they were last year by teams that know how to blitz effectively.

The high point for Johnson as a Longhorn is probably going to come in 2018 when the QBs are more experienced in this new offense and he’s had a year as a starter to learn the college game and what it’s like to be a focal point for a defense.