With the commitment of Zack Shackelford, Texas likely wrapped up its OL recruiting for 2016 unless they’re able to get currently Baylor-bound Patrick Hudson or new OL coach Matt Mattox determines that he can’t leave Waahid Muhammad behind in Tulsa.

With the hires of Mattox and Sterlin Gilbert, Strong has triggered a major shift in UT’s direction in regards to offensive schematics and preferred offensive line targets. While Wickline did compromise his OL schemes to make room for Watson’s playbook in 2014, and then Norvell/Traylor’s preferences and Patrick Vahe’s skill set in 2015, old Joe had a very specific vision for the OL that is not the same as the incoming Mattox.

As it happens, the current Texas OL and 2016 class happen to be a better fit for the Mattox vision anyways. Allow me to explain:

A shift in philosophy

Let’s go back a bit to the heyday of Wickline-Oklahoma State football, the year 2011 when the Pokes finished the season 12-1 with a Big 12 Championship, a Fiesta Bowl victory over the Andrew Luck-led Stanford Cardinal Machine, and a narrow OT loss in Ames, IA away from a national title opportunity against the LSU Tigers.

Their leading rusher, Joseph Randle, ran for 1216 yards that year at 5.8 ypc and his back-up Jeremy Smith added another 646 yards at 7.1 ypc behind the following OL: 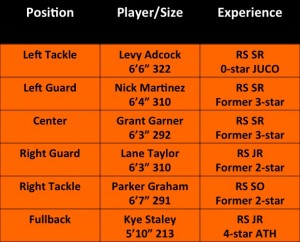 That right there is a Wickline special; an OL that dominated games without a single 4- or 5-star commit involved save (ironically) for the fullback who was once a promising athlete turned into a battering ram.

Wickline’s aim was to get as big of a group as he could, particularly at tackle, and then slowly and carefully tear them all down to pieces before rebuilding them as zone-blocking machines. Wickline wanted to run Inside Zone early and often every game with his big boys covering up and controlling opposing DL while Dana Holgorsen’s outside passing game kept numbers out of the box in Morgantown.

From the diamond and spread-I sets they would mix in Kye Staley and run various forms of lead inside zone as well, using the ram to seal the edge, blow up a linebacker in the hole, or trap an unblocked DE on the edge. The tackles were responsible for handling ends on islands outside, while sheer size and technique were important at every position to control opposing DL.

Here’s an example of Wickline’s favorite way to attack the middle of the field with the run game: 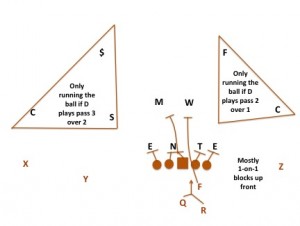 They ran some outside zone and some gap schemes like power and counter but the offense was built around running inside zone on reduced fronts, much like the offenses at dynasty programs Alabama or Mount Union.

Now let’s take another look at Mattox’s Tulsa OL and its common attachment, of course understanding that Mattox inherited and deployed this group, he didn’t choose or develop them over the span of their college careers: 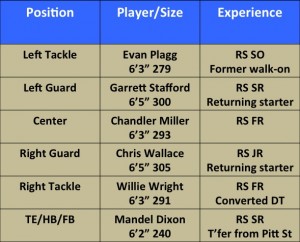 Mattox moved his best and biggest OL inside and relied on a couple of quicker, smaller guys outside at tackle much like Wickline had to do in 2014 when he realized that 6-foot-3, 280-pound Marcus Hutchins was one of the only remotely athletic players he had available.

You’ve seen this chart before, but I added tight end/fullback/H-back Mandel Dixon, whom after film study I can assure you was the most underrated player on Tulsa’s offense last season.

In this “veer and shoot” offense, the goal is to use wide spacing to force the defense to split their defense in half in order to defend the run game and the passing game at the same time. However, veer and shoot teams also often utilize a 6th blocker in the box to allow them to attack the defense with run-game variety.

Dixon caught four passes all year, but he was on the field for most of Tulsa’s snaps and he was a major focus for its offense because of his excellent blocking from all three alignments (fullback, H-back, attached TE) in different blocking assignments (trap blocks, lead blocks, kick-outs, combos). Dixon could do it all.

Whereas Wickline would invest in being able to run inside zone many different ways and then teaching his protection schemes and intense details, Mattox teaches simpler protections because his OL is run blocking on almost every play because of the RPO-based nature of the offense.

To execute this scheme, Mattox is looking more for mobility and the ability to pull and find targets in space. Having an OL that doesn’t have dominant size and weight at every position matters much less because the run schemes will generally involve angles, double teams, and pulling blockers rather than requiring the ability to grapple mano y mano with opposing DL.

Here’s an example from Tulsa’s 2015 playbook, this is just one of the many ways they blocked the power play:

You’ll observe that the guards and tackles all have assignments that require more in the way of quick feet and aggression at the point of attack then sheer size and grappling techniques.

This is actually an easier way to run the ball, and although Wickline was a wizard at building prize game dogs from junkyard pups, this is an easier path to having a formidable running game.

Take the Baylor unit that just mauled North Carolina for 645 rushing yards, this is what its OL and 6th blocker looked like in that game: 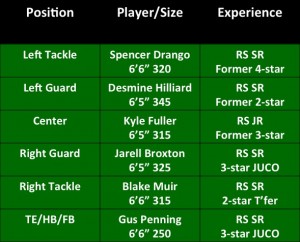 Lotta big boys on the Baylor OL as Art Briles always prefers to go with extremes (the fastest WR, the biggest OL, the biggest TE), but only Spencer Drango was a well-regarded talent coming out of high school (from my alma mater).

The rest are just big dudes that are always blocking at angles and shoving unhappy and worn out people outta the way. On the rare occasions that they played good DL that could matchup to them in the favorable situations that the veer and shoot creates for blockers, many of these guys (except Drango) were exposed.

So that leads us to what Mattox is building at Texas, which if given time should be the best veer and shoot OL that has ever been assembled.

Let’s start with the big three guys that he’s inheriting: Patrick Vahe, Connor Williams, and Kent Perkins. Vahe and Williams are ideal for the schemes that Mattox was running at Tulsa as both are at their best when finding targets on the move and adjusting after the snap. They were good prospects as IZ, one-on-one dominators, but they were at their best blocking power and counter in 2015.

Perkins is quite mobile as well but is basically a more athletic version of the kind of massive and powerful guards that Baylor typically deploys. As a guard with tackle-caliber feet he should be able to accumulate a ton of pancake blocks if he’s moved inside and allowed to attack Big 12 DL on down blocks.

Now here’s the 2016 haul that Texas is most likely to bring in at the moment: 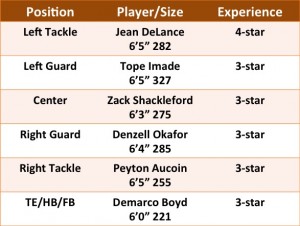 Of course there’s also Wilbon, who might make a better guard than Imade, and if Aucoin stays at TE rather than growing into an OT as I expect, than Okafor (Trey Hopkins redux) could end up outside.

Most of these guys were zone monsters in high school so the Mattox scheme for them will be like taking Calculus after stopping at Algebra II in high school whereas Vahe and Williams arrived with AP Calculus credits already in hand. However, all of them but Imade and Shackleford have plus+ feet for their positions and even those two will find their power and nastiness translates nicely to the new scheme.

One thing that really got Baylor into trouble against Oklahoma last year was that other than their lead runs where they blocked down on the right and pulled Drango around the edge, no one else on their OL was good enough to run behind against the Sooner front. The Sooners figured this out after the first Baylor drive, and it sped up their reaction time and allowed them to negate even the Drango-lead play.

With this 2016 group, Texas will have a large variety of schemes and OL that can pull and be featured blockers against a given opponent. What’s more, these guys are all going to be on campus for several seasons, whereas Tulsa’s OL was in its first year in the new scheme and Baylor regularly relies on transfers. That means greater proficiency in the scheme and more time to use high-level Strength & Conditioning to prepare their bodies for the kinds of movements that will allow them to thrive in the veer and shoot.

Thanks to the work of Joe Wickline in recruiting (in a roundabout way) and developing great initial classes, and now to Matt Mattox for bringing in a very OL-friendly scheme, Texas is on the path to fielding one of the more imposing OL in college football. Big 12 defensive fronts better look out because they’re facing a lot of 3rd and 1 in the coming seasons.