Daje Johnson is maybe one of Longhorn fan’s least favorite topics. Every year he tantalizes with his talent and then amounts to virtually nothing on the football field. Off the field issues, basic academic eligibility not least of them, have played a large role in keeping him off the field. His hybrid skill set that doesn’t allow him to fit into every offense like some cookie-cutter receiver is another concern.

Neither coaches nor writers nor message board pundits seem particularly interested in being seen as holding Daje stock. You combine the overall lack of discipline, ineligibility, and the lack of a typical receiver’s skill set and you have a recipe for unrealized talent.

This is his final chance to have an impact after a 3-year career that has seen him accumulate the following statistical totals:

That’s perhaps a tad more production than Charlie has been willing to concede while he’s maneuvered publicly to draw out the dog in this kid, but it’s considerably less than you’d expect from a player who’s been mentioned as being a potential cornerstone talent.

So why do we have to talk about Daje? Why can’t we just ignore him and treat any production he offers like a Christmas morning surprise? Because Daje’s talent fits perfectly into a serious demand gap in the Texas system for playmaking and constraint on opposing defenses.

Put simply, this team has a different ceiling with Daje involved that could even be as many as a few victories.

In the midst of all the excitement about the incoming freshman class, which may indeed be one of the best we’ve seen in the last decade of Texas football, it’s easy to overlook some concerning elements to this team.

The defense is depending on a big year from Jason Hall, who disappeared down the stretch last year after an injury and has battled to get healthy in the offseason. The linebacker corps is replacing two NFL-bound seniors with a true freshman and a senior who wins a job every offseason only to disappear in the actual season (Peter Jinkens, the defensive version of Daje Johnson). The defensive line has one really great, proven pass-rusher in tackle Hassan Ridgeway and he’s battling to get healthy as well. The two best players of the 2014 secondary are now in the NFL.

The defense should be good, but it doesn’t seem a stretch to say that the offense may have to pick up some slack to even match 2014 Texas in overall quality.

Meanwhile on offense, the team features a talented QB who’s been shaky and prone to disastrous errors when carrying a heavy burden or facing big time pressure. He’s playing behind an OL that may start two true freshmen and move the best guard out to right tackle where he struggled a year ago. The two proven chain-movers at receiver are gone, leaving a void that is likely to be filled partly by a true freshman and a true sophomore.

Finally, the team doesn’t have a strong tight end to help the team control the middle of the field and help set up playmakers in the run or pass game.

This is not how you typically describe a strong football team that’s on the verge of winning eight or more games.

What really stands out about this team is the high need for the offense to be able to run the ball and emphasize passing concepts that get the ball out quickly so this OL doesn’t have to hold up against all of the good pass rushers in the Big 12.

If you hadn’t noticed, the Big 12 slate includes Pete Robertson (Tech – 12 sacks in 2014), Shawn Oakman (Baylor – 11), Emmanuel Ogbah (Okie State – 11), Eric Striker (OU – 9), and James McFarland (TCU – 7). Texas needs to be able to get the ball out quickly and still get explosive plays that can sustain drives and lead to points.

Then there’s the blitz, which Texas mercifully didn’t have to face a great deal in 2014 as teams were often content to allow a 4-man rush to wreck the OL while dropping into coverage. Texas is going to have to beat the blitz in 2015 even if the OT combo of Connor Williams, Kent Perkins, and Marcus Hutchins actually provides an upgrade in edge protection.

The easiest way to handle all of the problems that a pass-rush or blitz can present is to run the dang ball, but in a spread alignment running the ball requires either a tight end and/or the ability to constrain the defense by attacking the perimeter with speed.

The common concern that Daje’s skill set doesn’t offer Texas an every down option in this offense is misplaced, the context of the 2015 offense should offer him opportunities to make a huge difference as the team’s de-facto tight end.

Daje Johnson can open big holes for the Texas running game if defenses feel like they need to play “3 over 2” in order stop him from ruining them with screen receptions. Take Wickline’s favorite play, inside zone: 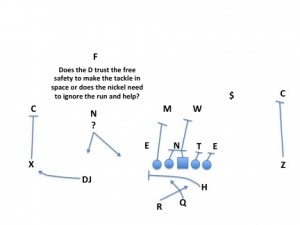 With Daje running a bubble to the field, the defense has to make some choices. Do they trust their front six to beat blocks and tackle Gray before he does damage so they can leave the nickel wide to stop Daje on the bubble screen?

Or do they want to attack the box with the nickel and trust the free safety to make the tackle in space against Daje?

With an explosive player out wide, the offense presents serious threats to two areas of the field at the same time. If the play is blocked reasonably well the defense will have to keep the nickel out wide and hope their free safety can arrive in time to make the tackle. If that free safety has to start flying downhill, you now have play-action opportunities.

Daje can help the run game more directly as well, particularly on sweeps for plays like power-read that should play major roles in the Texas offense in 2015. 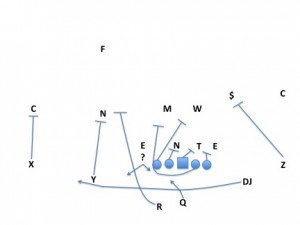 This time Swoopes reads the defensive end, if he goes wide to stop Daje on the sweep, then Swoopes plunges downhill behind a lead block (by Vahe or Perkins) while the running back can pick off the most threatening defender or even climb all the way to the free safety and take him out.

If the end stays home to stop Swoopes? Hand off to Daje in space and let him do his thing. The offense could also structure the play to block the nickel with the running back and try to get angles on the corner and free safety to make a clearer path for Daje.

Every single one of Texas’ running plays could have Daje attached as a constraint option or decoy to force the defense to account for two threats in two different areas of the field. He won’t tip the offense’s hand in a spread option scheme and allow the defense to swarm the ball because it’s designed to make use of athletes of his ilk.

If Texas can’t effectively block a front due to the lack of a good tight end, why not just force it to spread out to contain Daje?

What about the passing game?

So clearly there’s a major utility in having Daje on the field on 1st and 2nd down, but what about when Texas wants to throw the ball? Won’t Daje limit the options? Not necessarily.

Watson and Norvell’s West Coast combos regularly make use of flat routes that are easy to run. Here’s a Norvell play that was a favorite in Norman back in the Landry-Broyles-Stills era, you might recall them using it to burn Texas in the Red River Shootout of 2011: 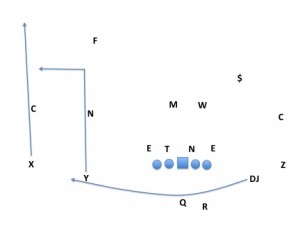 The goal here is to get the defense’s field DBs biting down on the flare route by Daje out of fear of what will happen if they allow him to catch the ball in open space. That happens and all of a sudden you have Marcus Johnson or John Burt running downfield past the corner and the safety.

Then there’s 3rd down or other passing situations, where Texas needs to beat anti-pass schemes, like the Big 12 favorite of playing cover 2 with the field corner playing man coverage outside on the X receiver. There’s no reason to take Daje off the field in these situations either, instead he can just run simple flat routes that set up true receivers like Marcus Johnson to get open: 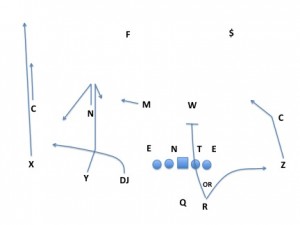 Normally the nickel would like to cover the Y slot receiver but he can’t do that with Daje crossing his face on a flat route and the field corner getting run off by the X receiver. He’ll have to chase Daje and hope the middle linebacker can get wide to stop the option route by the slot in open grass…good luck.

As indicated in the diagram, Watson could combo this with a lead draw for Swoopes if the middle linebacker leaves the box or by using the RB on a pass combination on the weakside designed to beat the blitz.

Does any of this look like it asks anything particularly difficult of Daje Johnson? No, of course not. Texas could use a tight end to run these simple underneath routes or they could use Daje, whom defenses will actually have to gameplan to cover or risk seeing a simple pitch and catch turn into six points.

So we see that with Daje on the field Texas has a lot of ways to get the ball out quick, overstress defenses to give Swoopes easy options, and run the ball. All of this helps a great deal in negating pressure from the defense, particularly from aggressive and effective defensive ends.

However Texas still needs a way to beat the blitz, especially on passing downs, or else teams will seize on every opportunity to pressure this young OL from different angles and get Swoopes in bad spots.

The nice thing about the blitz is that it leaves more grass and lighter coverage behind it for Daje to work in. A tunnel screen like this one that frequently sprang Blake Lynch for big gains at Gilmer could be a devastating weapon with Foreman or Daje catching the ball. Screens will undoubtedly be a big part of the Longhorn solution for pressure in 2015 and they require getting athletes on the field.

When you put elite athletes in space in the spread offense it makes everything relatively simple for the offense. Daje Johnson is an elite athlete who should be a major component of the 2015 offense, regularly replacing a tight end on the field in 4-receiver sets and frequently serving as the slot receiver in 3-receiver formations.

Granted, he’s not been a dutiful member of Longhorn nation over the course of his career and coaches have often been skeptical of making a player of iffy trustworthiness the feature of the offense. Well, he’s eligible now and he fills a major need within the offense in a year when Texas happens to lack a great TE or proven playmaking at receiver.

If Texas fans can be brave enough to hope for 2015, their attention should center around this controversial figure that just might hold the key to making offense simple and straightforward for the Longhorns for the first time in too long.