We’ve now seen Jerrod Heard start eight games as the quarterback at Texas and face a variety of different styles of defense and opposing game plans meant to stop him.

After Texas’ scrimmage last Saturday, it’s time to look at what Heard has done and fit the 2015 version of the young Longhorn on my QB development tiers.

Level 1: A QB who is too limited to unlock a complete system of offense.

Level 2: A QB who can master a full system of offense.

Level 3: A QB who can dominate within a system.

Level 4: A QB who is good within a system but can also consistently create offense outside of what the system creates for him.

After slotting Heard on the appropriate level, we can talk about what needs to happen for him in the offseason for Texas to get the most out of this talented redshirt freshman.

Obviously the first step is to determine exactly what the Heard system is so we can evaluate whether he’s able to fully wield it or not.

Norvell’s job upon taking over for Shawn Watson and Joe Wickline was essentially to craft the Texas offense in such a way as to allow Heard’s talent to be brought to bear on the football field. Tyrone Swoopes’ slow development towards becoming Texas’ 2nd level 2 QB since the Colt era was brought back to earth with a thud when he fell apart under the bright lights in South Bend and Texas needed to turn to Heard’s legs so they could have a way to generate easy offense against a brutal opening schedule.

The Norvell system is a power-spread built around the spread-I formation with a QB-run heavy playbook and a passing game largely built off play-action. The goal with a power-spread is to simultaneously threaten every part of the field via the run game, perimeter screens and passes, and downfield bombs.

To really nail down this scheme from a spread-I formation an offense needs the following pieces:

-A solid offensive line that is good at run-blocking and solid enough in pass protection (most longer throws will come off play-action). Texas has this in 2015 and has some feature run schemes in gap left and lead zone they can run against most anyone playing an honest front.

-A good lead blocker out of the backfield. Texas has a few guys that are solid in this role with Caleb Bluiett and Alex De La Torre while Andrew Beck is growing into the role.

For this system to work, the QB really only needs to be proficient in the passing game throwing RPOs or play-action bombs, however if he can also create off-schedule plays with his feet or add an extra dimension to the run-game, the system can become a nightmare to stop.

The challenge for a player like Heard is that the nature of the spread offense is such that without an effective passing game, things can come apart at the seams. If defenses aren’t forced to widen out their 2nd level to take away the perimeter game, nor required to line up their safeties shallow to do the same, then the spacing of the formation begins to work against the offense. 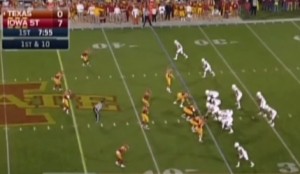 As you see in how ISU is lined up against Texas, the outside linebackers are sitting on the edges ready to out-number the run game from the outside-in and force the offense to work in confined space.

The basic spread response to this is to throw a bubble screen or quick pass outside. Some teams, like Michigan State or Baylor, will play their outside linebackers aggressively on the edge but then line up their safeties shallow so they can stop the perimeter passes. You can see in that screenshot that Iowa State felt no compunction to bring the safeties shallow because Heard couldn’t throw the bubble screen with the right timing or accuracy to allow the slot receivers to do damage in all of that space the Cyclones were gifting to Texas.

That means that the safeties and corners are all dropped deep, most of them are 10 yards off the ball, and thevertical passing game is no longer an efficient strategy for attacking them.

The biggest issue Texas has had this season comes from the fact that Daje Johnson is one of the best players in the league yet he only has 313 yards on the season and averages just under four touches per game.

This would be like running a spread pick-in-roll offense with a cast of three great 3-point shooters, a center who’s dynamite rolling to the rim, and PG who can finish drives to the basket but is completely unable to kick the ball out to the open shooters when opposing teams collapse into the paint.

Because of his inability to execute the screens and quick game concepts that make the spread work, Heard is currently just a Level 1 QB despite his exceptional ability as a runner and solid work throwing deep lobs.

Where is Heard as a passer?

Where Heard thrives as player is when he has simple reads, in-breaking routes, and when he’s making decisions on the run. The challenge for Norvell since teams starting gaming the Texas offense to take advantage of its inability to make them pay for aggressively deploying their over-hang defenders is to find ways to set up Heard for success in the passing game.

Heard has shown some ability throwing two-man routes like “y-stick” and “double slants” where he makes a quick throw based off the read of a single defender. When Heard knows what he’s looking at, he’s capable of decisiveness and accuracy either from the pocket or on the move.

Here’s him demonstrating the ability to read the leverage of a defender and fire a quick strike on Texas’ “stick-dragon” route combo where he has a slant-flat option on the boundary:

He sees the weakside linebacker widen out and throws the slant against bad, off coverage by the Jayhawks. The ball comes out on time, although a better defense would have easily snuffed this out.

Perhaps another QB beats the coverage with the stick route but at least you see Heard demonstrate the ability to know what the defense has left open and to take it. These are the initial steps in mastering the quick passing game.

What Heard needs is an offseason worth of reps at the screen passes and other basic routes of the spread offense. He needs the chance to focus on a few concepts and combinations that will carry him against most defenses and then perhaps he can execute that element of the offense well enough to open up the running game and vertical passes even more.

He’s never going to be great in the quick game, he simply lacks the vision or throwing mechanics, but if he could be consistently competent that would make a sizable difference and help prevent the careers of Rod Bernard or Newsome from being wasted as Daje Johnson’s has been.

It has to be noted that if Heard can’t develop the consistency and mechanics to be consistent in the quick game, then his athleticism and skills making quick reads and darting movements could play very well at WR.

The upcoming journey to the mountains

Meanwhile, Texas plays West Virginia this Saturday who is coming off its first win in Big 12 play. If I were Dana Holgorsen, I’d be very tempted to complain about the schedule, which is simply never going to allow the Mountaineers an easy path to a strong season in this league.

This time around they drew an opening slate of @Oklahoma, Oklahoma State, @Baylor, @TCU, and then home to face Texas Tech whom they defeated by picking at the Raiders key flaw.

Much like UT’s record could have looked much better had they made an extra point against Cal or not been jobbed by the officials against Okie State, West Virginia’s final record is going to look much better than its current standing after they finish with Texas, @Kansas, Iowa State, and @Kansas State, all of which are games they should probably win.

Their offensive scheme is an Air Raid version of the power-spread that is simply missing a consistent vertical passing attack. You can see how WVU’s QB Skyler Howard compares with Heard in this table:

Heard has been a more explosive player than Howard but the West Virginia signal-caller’s acumen in the passing game and solid ability as a runner has opened things up for the Mountaineer’s skill players, most notably RB Wendell Smallwood, who’s run for 954 yards on the year at 6.7 yards per carry.

The challenge for Texas will be controlling Smallwood,who is going to be the best offensive skill player on the field Saturday.

Heard’s challenge will be facing a team that can show a lot of looks on defense and out-number the run game while playing tight coverage on Texas’ WRs. The Mountaineers also love to play odd fronts, like the Cyclones, that can make it tough for Texas’ zone or power schemes to find much room between the tackles.

If you thought the Cyclones left little air for the Texas offense, wait until you see what West Virginia DC Tony Gibson draws up for this game.

In addition to the Longhorns’ struggles on the road, this is why there isn’t a great deal of hope for Texas finding its fifth win in this game or managing to become bowl eligible in 2015. The bigger question will be how Strong responds in the offseason and how the offensive staff determines to utilize and develop Heard moving forward.