Last week we talked about what life without Hassan Ridgeway could look like in 2016 and it wasn’t a particularly exciting topic. Pending the signing and development of more DL, Texas has a fairly thin depth chart in terms of players that are ready to play as a 5- or 4i-technique strongside end, double team-eating nose tackle, or disruptive 3-technique.

In fact Texas has three players that might end up being reliable in those spots and none of them are sure things at either the strongside end position or nose tackle.

That said, there is talent along the Texas DL depth chart. More than a few Big 12 teams would love to plug in Bryce Cottrell at DE next season, Paul Boyette and Poona Ford are both capable of being very disruptive if not asked to stonewall double teams all day, and Chris Nelson has upside that isn’t clear yet. What’s more, Texas has a glut of edge rushers with Naashon Hughes, Malik Jefferson, and Derick Roberson, all potentially devastating weapons that could wreak havoc on Big 12 passing teams.

The underlying point is that Texas has a ton of talent at corner, DE, OLB, and pass-rushing DTs that are all just needing some protection from a nose tackle and a good mike linebacker who will do the dirty work inside. Texas is probably at least another year away from having either, and they need to do all they can to leverage the exceptional talents of Malik and Co. in the short term.

Temporarily scrapping the 3-3 Under

Charlie’s 3-3-5 has taken a ton of heat from a lot of different directions for a lot of different reasons but largely boiling down to the fact that it isn’t a front designed to stuff the run. It’s time to offer two news flashes for the critics offering these takes; the first is that stopping the run in this league is pretty overrated these days.

Talk all you like about how Big 12 teams run the ball plenty or how Baylor will smash you if you don’t load the box, the fact of the matter is that nearly every team that runs the ball well in the Big 12 does it from spread alignments that use the passing game to setup and protect the run. If you aren’t scheming to control the passing game, then nothing else matters. That’s where everyone is designed to hurt you unless you leave the box totally vacant.

What’s more, Charlie has never particularly cared about having the baddest run defense in the nation. Check the numbers on his title-winning 2006 or 2008 Florida defenses which ranked 12th and 15th respectively in rushing S&P but 1st and 4th in passing S&P.

Charlie wants to control the opposing team’s run game, limit big plays by loading the middle of the field with versatile athletes who tackle well, confuse the QB with movement, and then end drives by attacking teams with the blitz.

The problem with the 3-3 for the 2016 Texas team isn’t the scheme itself or the lack of emphasis it puts on stopping the run. The problem is more what our own Coach V has noticed of late, that it doesn’t match the strengths of the current personnel.

After wrestling with the roster and the X’s and O’s for days, including throwing ideas back and forth with fellow scheme-enthusiast Gabriel Alcocer, I was forced to conclude that the best possible base fronts for Texas that maximizes the strengths of the players would not be 3-3 fronts. Whether stunting into the Under or Over, as Texas did at times last season, this alignment simply doesn’t match what Cottrell and the DTs are best at and will inevitably set up Texas to get run on without offering enough of an advantage for the pass-rush to make up for the loss.

Essentially, the 3-3 Under would work if Cottrell were to suddenly grow into the SDE role as a senior (even though he’s already great as a traditional DE), Nelson were to grow into a double team-eating monster nose tackle, and Texas were to also find depth behind them. Quite frankly that’s not a particularly likely scenario.

An alternative front for the 2016 defense

The ideal front for Texas in 2016 would be one that frees up Cottrell, who might be the best DL on the team, to play on the edge while allowing Boyette and Ford to slant across interior gaps and make plays with their quickness rather than trying to beat opponents straight up. To that end, I suggest the following alignment: 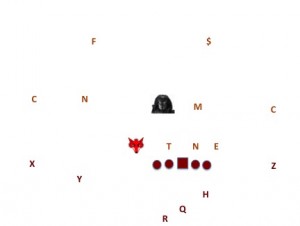 It’d still be a 3-3 in terms of utilizing three DL (T=Ford, N=Boyette/Nelson, E=Cottrell) and three LBs (Fox=Hughes/Roberson, M=Freeman/Wheeler, Predator=Predator). However, the DL would line up in a 4-2 look pre-snap with the DTs in 2-techniques from which they’d work across the guard’s face to attack either gap based on the call. Haley often ran his fronts this way while at LSU so it wouldn’t be out of left field for this coaching staff.

From that alignment the defense could get in either an Over or Under front, if Texas wanted to run the Under front it would look like this: 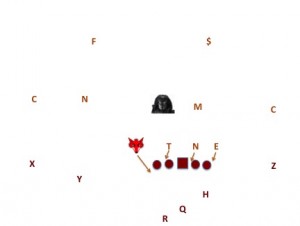 Cottrell will end up as a SDE, the nose works back across into the A-gap, the tackle becomes the backside 3-technique, and the fox is the weakside end. Having the Fox and Malik lined up to the same side (the field) also offers some fun possibilities and advantages as well: 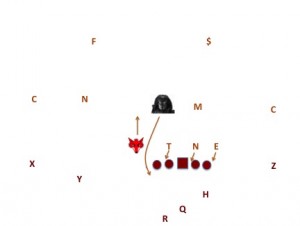 In this instance Malik is either the weakside linebacker running to the football or else the weakside end trying to chase it down from the backside, in either instance he’s well set up to do real damage.

Here’s how it would look slanting into an Over front: 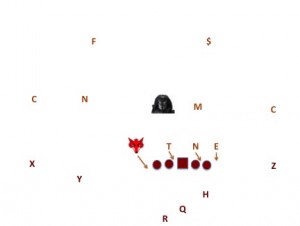 This is arguably even better, as the Over front nose tackle is less likely to get targeted by a double team and the Over three-technique is being created here in such a way that doubling him well enough to drive him off the line might be difficult because of his movement.

Cottrell may face a TE or H-back block from time to time in this look, but at least he’s never having to grapple with an offensive tackle and fight his way across their face into a gap as he would have to do as a 4i-technique in the 3-3 fronts.

If the opposing OL are great at picking up slanting DL, this kind of style could get your linebackers killed by the OL sealing off the slanting tackles and quickly releasing up to the second level, but slanting is a particular strength for Ford and Boyette and many opposing teams would have to ask their OL to be hesitant before climbing up to the linebacker or else risk one of the Texas DTs making a tackle for loss behind the line of scrimmage.

So how does this work?

Let’s imagine this front hypothetically against the team that is certain to be the frontrunner in the Big 12 in 2016, the Oklahoma Sooners, and their two best running plays.

Let’s start with outside zone, which has been their bread and butter for many, many years now and can be pretty scary when Samaje Perine is planting and cutting up-field. I’m diagramming this from what I suspect will be OU’s strongest formation in 2016, a double RB set with Mixon as the R and Perine as the F, and Texas slanting a 3-techniqueinto the boundary. 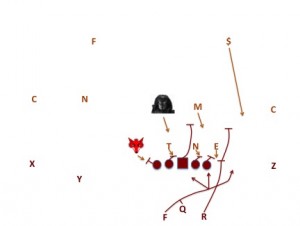 Since he doesn’t know what that nose tackle is doing, the center will initially step to try and reach him before seeing that he’s slanting into the next gap over, at which point the center will then have to try and find a linebacker in space. Who doesn’t like Malik or the other LBs chances of blowing past OU’s first year starter at center in that situation?

There’s also a good chance of the backside tackle (ideally Ford) beating the guard while slanting into the backside A-gap and taking away a cutback if not making the play himself.

Winning at the point of attack depends on OU beating Cottrell on the edge and freeing up Mixon to find a defender to block on the edge. Even if this happens, Texas will have a lot of speed on the field to chase plays like this down and the linebackers should be pretty free to run to the ball. If the right guard here can’t reach block the nose (Boyette or Nelson) then it’s all over for OU.

Next up, their counter trey play that they were able to get going at the end of the year last season: 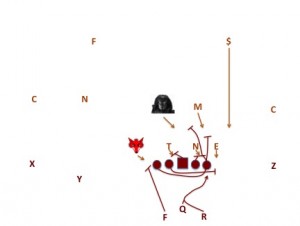 The ability of the slanting nose here to split the double team and avoid getting caught and driven off the ball is a main key that would be needed to avoid giving the RB options and lanes but there are some other positives for Texas that could swing the play in a positive direction.

Again, there’s the tackle slanting backside that the center has to firmly connect against as well as the Fox who’s working against a block from Perine who could both potentially run the play down from the backside.

Then there’s Malik, who’s likely to be running free since it’ll probably be all that OU can do to get an effective double team on the slanting nose much less drive him back into Malik so that he can also be blocked. There’s a general opportunity in the Big 12 in 2016 for a defensive system designed to attack OL with movement and confusion as the league is seeing a lot of graduation and attrition for the unit at many programs: 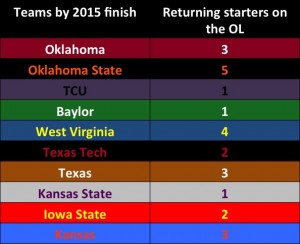 West Virginia is the only team that’s returning an imposing interior OL while many good units are getting decimated by graduation including likely league contenders Oklahoma (returning their tackles), Baylor, TCU, Tech, and Kansas State. Oklahoma State does return all of its OL, but they are terrible.

If Charlie and Vance are willing to adjust and move away from relying so heavily on the 3-3 stack front in 2016, there could be an opportunity to put a thin DL roster in position to make plays and protect a young but athletic LB corps with an aggressive approach. If that could happen, we could see a big-time year from Malik Jefferson and perhaps an opportunity for this defensive staff to stick around until the roster is better suited to run their preferred schemes.