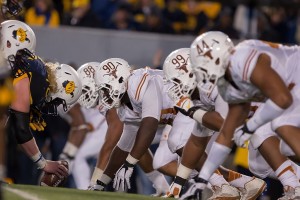 This week’s Roundtable welcomes Dana Holgorsen to Austin for the fourth time as Mountaineer head coach.

1. How does Texas take back control of the Big 12 race?
Eric Nahlin – Show up. It really is that simple this year. When they show up, they win, when they don’t, they lose to teams with a pulse. That’s the frustrating thing — it’s all mental.

Justin Wells – Starting strong, mixing in some tempo, letting Ehlinger/Ingram do their thing, and for the secondary to scrub Stillwater out of their minds. If they hit Will Grier, their chances increase dramatically.

Ian Boyd – They need to come out with a focus on defense, on a mission to deny the big passing plays that fuel the West Virginia offense. Do that and pressuring Will Grier or stopping up the run will surely follow as the Mountaineers don’t handle it well when you take away their favorite toys. On offense, Texas should involve both tempo and the QB run game early and also consider mixing in some double TE sets to flip the script from being about West Virginia’s ability to disguise their looks to being about West Virginia’s ability to get off blocks.

Joe Cook – Bring the same level of defense that showed up in Morgantown last season to Austin at 2:30. The Longhorns can’t count on Will Grier missing three quarters, so they might have to step it up another level. We saw Texas run over a “small, fast defense” earlier this year against TCU. I think they can do that again on offense. The defense just needs to hold up its end of the deal.

Scipio Tex – An OU upset loss in Lubbock would be the first step. The Horns need to play fast and simple on defense and attack WVU with tempo, a QB involved running game and physicality against an undersized WVU defense.

2. One player on offense an defense that needs to perform at a high level Saturday.
Eric Nahlin – It’s Sam. Run him. It’s the one thing guaranteed to work versus Big 12 teams. Gary Johnson on defense. The WVU OL isn’t great so he should be able run to their ball carriers.

Justin Wells – On offense: Johnson & LJH. Both can’t have 1st half, drive-killing drops. They have to continue to play up to the standard they created. On defense: Brandon Jones. After breaking Grier’s finger in Morgantown, that play might be the reason Texas was bowl eligible. Jones has had a breakout year up until last Saturday. Time to was that taste out of his mind.

Ian Boyd – Andrew Beck is going to be chasing speedy LBs all day long and a breakthrough day on the ground for Texas includes him getting his hands on David Long and Jovanni Stewart. On defense, Texas can bottle up the West Virginia offense if Kris Boyd plays his best game of the year and erases his side of the field.

Scipio Tex – Sam Ehlinger has the potential to dominate this game with his legs and arm. If he can continue his no turnovers streak (knock on wood) and Texas has him carry 12+ times, the play action passing game will open right up. On defense, Texas needs a strong performance from Kris Boyd to lock down Sills.

3. Score prediction
Eric Nahlin – Whatever I wrote last week applies. I picked Texas in a close game with each team scoring in the 30’s but said I said Ok St could very well win. I’ll pick UT on the strength of this team playing well versus good teams, or teams it perceives to be good. 38-34.

4. Game of the week that ISN’T LSU/Bama
Eric Nahlin – How in the hell is Kentucky #9? They suck, therefore the game versus Georgia sucks. I’ll be interested in how long Tech can hang with OU and how well Aggie fares at Auburn. Solid slate of compelling games this week.

Ian Boyd – I don’t know if it’s the next biggest game but Oklahoma’s trip to Lubbock sure could be interesting and has a lot of implications for Texas. Beyond seeing how another team tries to tackle the Sooner offense, another loss for either of those teams really hurts their chances at a Big 12 title game appearance, particularly Tech.

Scipio Tex – OU/Texas Tech will certainly have my interest

5. Upset pick of the week
Eric Nahlin – LSU over Alabama

Ian Boyd – I think LSU can not only cover the 15 point spread but potentially even beat Alabama. The Tide are fantastic, no doubt, but they’ve also feasted on teams that can’t man up and challenge their speedy young WRs. The Tigers can and it’ll be interesting to see how they respond.