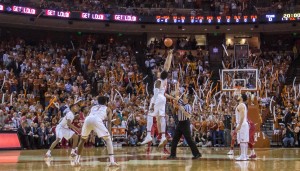 In a game that typified the roller coaster of emotions that has been Texas Basketball this season, the Longhorns fell to the Northern Iowa Panthers on a buzzer-beating, halfcourt heave, 75-72.

The opening moments looked good. Texas knew they could have success by attacking the paint against this Panther team and they did in each of their first five possessions as they jumped out to an 11-4 lead.

Then they spent the next 13 minutes playing as if there was a force field guarding the lane and settled for jumper after jumper.

Actually, that’s not true, the jumpers were open, in rhythm and shot by Texas’ better shooters. They just didn’t go in. Lammert and Felix combined to shoot only 1-8 beyond the arc in the first half and while UNI’s score kept flicking higher and higher, Texas struggled through empty possessions even though the shots were of decent quality.

The second half was much better (as shots falling often does), but the damage was done.

It was an offensive night that was, decidedly, “this senior class.” In the big moments when big time players make big time plays, Felix, Ridley, Lammert, Holland and Ibeh combined to score 29 points on 28 shots.

The rest of the team scored 53 points on 28 shots.

When your young, inexperienced players are the ones stepping up and playing with efficiency under the brightest lights of the biggest stage whilst your older, veteran players wilter, things are going to be a struggle.

Texas struggled staying in front of UNI’s ball handlers all game long and paid the price by putting a team that was top 20 in the country in free throw percentage on the foul line 32 times.

Genuinely, the only real way UNI was going to hurt this Longhorn team from a half court standpoint was if UT got into foul trouble.

And Texas couldn’t get out of their own way, as Northern Iowa made 19 trips to the foul line in the first half on their way to 44 first half points.

Again, the second half was better, but Texas still had UNI into the double bonus before the midway point of the half and too many missed opportunities on the offensive end were consolidated with poor rotation and a lack of individual awareness on finding shooters and staying square on the ball.

A Look at the Numbers:

Star of the Game: Isaiah Taylor

Davis would have been a worthy candidate, here. As would have Ibeh for his second half defensive performance. But Taylor was Texas’ best player and, were it not for Jesperson’s 50 footer at the buzzer, Isaiah did hit the game tying basket with 2 seconds left.

It was a gutsy last month for Taylor who was playing with a severely debilitating situation in his foot that directly impacted his biggest strength as a player.

If this was Taylor’s last game in burnt orange, he can go out with his head held high.

Texas fans everywhere appreciate all of the energy, effort and pride they all have poured into this program over the last four years.

Tomorrow is a new, brighter day.

Thanks for a great season of awesome hoops discussion, friends.

As always, you make a toilsome job very much worth it.