If you’ve been listening to our Pretend We’re Football Podcast (and judging by the analytic numbers…you haven’t), you’d know that one of the reasons for some of the heightened expectations this season is Texas’ quasi-veteran laden lineup.

And, while the quasi part might not make you feel all that great, take heart that it’s not the same absolutely-not-f***ing-veteran-laden-at-all lineup of Shaka’s last two years.

Indeed, it’s just about guaranteed that at least four of the five Texas starters will be sophomores or older this year with five out of five being a distinct possibility.

We’ll get to the roster in a subsequent post, but let’s talk about the offense.

While the offense wasn’t quite as bad as it looked last year (89th out of 351 D1 teams in offensive efficiency last season), it also wasn’t some kind of work of Da Vinci-ian beauty. 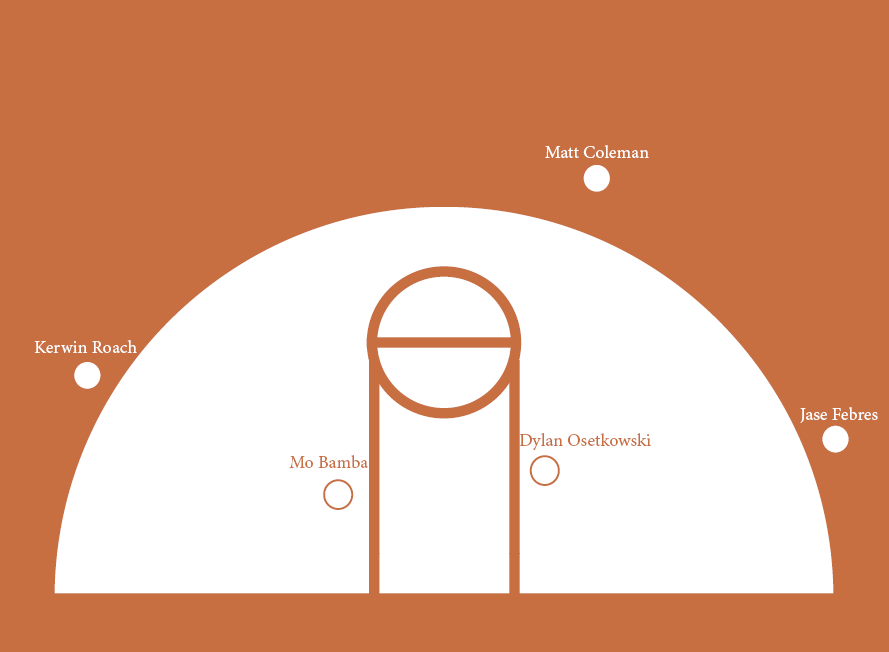 Sometimes the angle/personnel would change but, essentially, that was where Texas seemingly had to be in order to initiate action last season in their offensive sets.

So, while they could talk all about wanting to play fast or wanting to push tempo, Shaka thought/knew/whatever that the best chance for Texas to get a clean look in their offensive sets was for the offense to get into those positions and then go from there.

Meaning, if it took Texas 12 seconds to get into that set (that’s pretty high, admittedly), then that’s what it took. And, then, only after they got into that set could they set in motion their offense.

One of the biggest issues in waiting for a set to initiate an offense works both ways. Many times that elongated timeframe also allowed the defense to get set and start their defensive assignments in earnest as opposed to recovering against an attacking offense.

That’s the buzz word this year.

Texas wants to be initiating their offensive system within the first seven seconds of the shot clock.

The thought process is pretty simple:

·Coleman, Roach, Long and Ramey (plus, potentially, Jones) can all initiate offense early with the ball in their hands
·Texas’ roster is jam packed with athletes who can move and finish
·The collective hoops IQ of this roster has improved significantly with the last couple of recruiting classes
·Coleman and Roach have both shown a strong ability to convert/generate fouls when they can attack against retreating/un-set defenses

There are, potentially, some issues:

·Rebounding, this year, will be an all-hands-on-deck affair, so run-outs could be at a premium
·Depth is there, but playing faster can lead to foul trouble (Coleman and Roach, wink wink), so playing intelligently will be crucial
·Previous iterations of this team have had issues with distinguishing between early shots and high quality shots

The other wrinkle that Texas will look to incorporate is an idea called continuity. Continuity is the concept that the last 7-10 seconds of a shot clock will shift to an individually rotating set of movements designed to highlight a players’ personal skill sets.

Again, the idea is simple: create action where players have a cyclical/pre-determined motion at the end of plays that would lead to them getting the ball in their most-effective situation

·Sims flashing to the rim
·Osetkowski on flares
·Kerwin attacking weakside
·Febres/Long brushing off screens or shifting to the corners
·Etc.

This will normally happen in breakdown or late-clock situations when plays either lost their flow or were forced into check down looks if penetration led to a safety-valve kickout.

It’s not overstating it to say that a Shaka Smart team that can figure out its offensive efficiency is a scary thing for the rest of college basketball. Athleticism, skill, defense.

Shaka’s teams have those things in spades.

Now we just need to see the ball go through the hoop.