Here’s my third instalment of the Preseason Hoops Post Series before Texas embarks on the 2016-17 season and second under Shaka Smart. Today, we look at the offense.

Last year we went over Shaka’s diamond press. That should/will remain the cornerstone of what he wants to do, defensively, but what about his half court defense?

First, the numbers represent a team filled with Coach Barnes takes. Without criticizing the majority of players on the squad, there were really only four “Coach Smart” kind of players on last year’s team, defensively: Prince Ibeh, Demarcus Holland, Isaiah Taylor and Kerwin Roach Jr. That’s not to say that others on the team didn’t have their own set of defensive abilities, just that the personnel did not match the perceived system.

Second, rebounding was negatively affected by the loss of Ridley and the considerable strength of last year’s schedule. That being said, rebounding remains the largest concern of the 2016-17 version of the Longhorns.

Third, steals numbers should increase with the infusion of Jones and Allen, along with the emergence of big minutes for Roach.

Fourth, Texas’ 2015-16 starting backcourt had some truly rough defensive numbers in comparison to their backup counterparts. For instance, Taylor averaged 0.08 defensive rebounds per minute. Felix averaged 0.05. Meaning, the two of them combined for only .13 defensive rebounds per minute played. Roach (.14) and Davis (.12) combined to double that number (.26). Steals were comparable. Taylor and Felix combined to average .02 steals per minute. Davis and Roach were at .03.

None of that is to say there’s a transitive property between seasons of how one person/section/team did one season and how another will do the next, but the defensive purpose and ability should take a turn for the positive this season as opposed to last, considering personnel decisions.

Much of what the Longhorns do on defense is predicated to making the opposing ball handler make quick decisions with the ball. This is designed to put ball handlers in high pressure situations and lead to turnovers or forced shots.

The Longhorns look to do this by…

Guards and wings will extend contact out to 25+ feet if they have to to deny the dribble hand off or initial pass into the offense.

Like for like (especially guards) will switch almost every time unless Roach (maybe Jones moving forward) has an assignment they don’t want him to come off of. Against teams with dynamic movers at the four/five, switches could happen on every screen.

In any defense, the amount of weak/backside help teammates can give each other is an important aspect. The give and take, then, deals with how defenders contest and show on ball reversals or skips. Shaka wants his team to “get big” and play with great quickness when they get out to contest. This makes it difficult to capably guard against a blow by, but they’d rather funnel action into the post than give up uncontested threes.

The diamond press utilizes the trap consistently, but implementing trapping in the half court can be more difficult.

Generally when trapping guards, it will be either along the high sideline or when the hand off/pick and roll keep happens in the 25+ foot range. 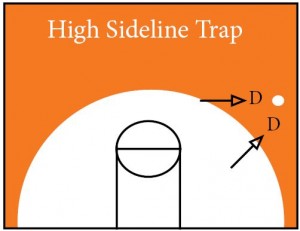 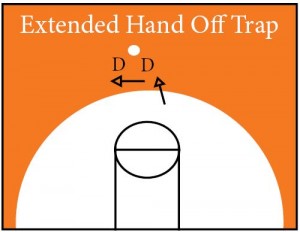 Some focal points:
· Emphasis on pushing the ball/dribble as high towards the half-court line as possible
· Remaining defenders often move into triangle zone of elbow-elbow-low block
· Turnovers often happen on the release pass instead of at the trap

The nasty truth is this: in seven years as a head coach, the best defensive rebounding finish Coach Smart has posted was last season (4th out of 10 in the Big 12). Before that, the best result was 6th out of 14 in the A10 while at VCU.

What’s more, in those same seven seasons, the best defensive rebounding percentage finish a Coach Smart led team has had was 100th in the country, and that was an outlier. Three times in those seven years, his teams were in the 250+ range, nationally.

Well, last year the loss of Cam Ridley destroyed any semblance of rebounding advantage Texas had (Prince, for all his strengths, is not a good defensive rebounder). In previous seasons, VCU was willing to concede the defensive glass in order put numbers above the arc for traps. Turnovers as a trade for rebounds, so to speak.

What about this year?

Well, much will depend on Allen and Banks. Malik Isom is an interior player in length, only and Shaq Cleare’s lack of athleticism puts him into a difficult situation on the boards. Jarrett and James will likely lead the team in rebounds (unless Roach takes a big step up, which is possible).

Will the tradeoff be worth it?

It’s unlikely Texas is able to create enough turnovers (and, in particular, steals) to make up for the rebounding issues they’ll likely have, but it should be closer this year than it was last season. And, with the addition of Hamm and Sims on the way, those problems will likely only get easier and easier to deal with as time goes on.

There are no defenses that can guard against everything, so the attention centers around values.

Coach Barnes valued consistency and execution, so his teams generated very few steals and rebounded the hell out of the ball (they also struggled in three point defense).

Coach Smart values putting players in situations where they have to execute against pressure and discomfort, so his teams pressure the ball as high as they can and they are often the top team in the country at generating turnovers (Texas likely will, eventually, too).

The problem for Shaka is that he’s still working with a roster that is not, truly, his own. It will be soon, and I think the 2017-18 season could be special because of it.

However, if this version of the Texas Longhorns has a defense that seems to be almost a contradiction to itself, it’s because it still, kind of, is.

Here’s to Allen, Banks and Roach being great rebounders…