By: Joe Cook and Justin Wells

Despite a sluggish 1st half from both teams, they both turned on the gas in the second half. Butler never got closer than three points after UT’s early 2nd half run as the Longhorns beat Butler, 61-48 in the PK80 Invitational in Portland on Thursday night.

No. 1: Andrew Jones holds it together

Through 12:16, the Longhorns and the Bulldogs combined for just 22 points; Texas had 13 and Butler had 9. Neither team shot well (Butler was 3-for-17, Texas 5-for-16 at that point), but Andrew Jones kept the Longhorns offense looking moderately respectable. At that point with 7:44 left, Jones had 10 points on 4-of-5 shooting. Not only did he make tough shots in the first half give Texas a small lead, but he continued to contribute well in the second half. Jones was 2-of-5 with four points in the second half for four points to make up his game-high 16 points. He hit tough mid-range jumpers, drove well off the ball, and did some of the things that Jay Bilas said he needed to improve on very well. 16 points against a tough opponent in a tough game? That’s better poise and body language.

No. 2: Closing the stretch

Finishing games is important. It’s especially important against some of the better Nike schools in the nation. With 4:30 left, Texas was up on Butler 47-42. They finished on a 14-6 run where Texas won on a hustle play on defense, followed by Dylan Osetkowski finding his home above the rim after some solid post moves, and finally culminating in Matt Coleman and Kerwin Roach adding points to make sure Texas takes on the Blue Devils tomorrow.

Impressive for a young team, but also an impressive job by the guys that help make the offense go (Roach/Osetkowski/Coleman) to make sure the Horns finished strong and under control. – JC

3. That first half though. 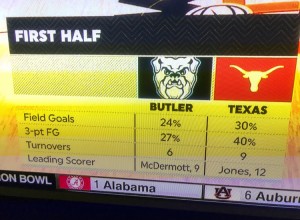 On one side, the defense was salty. Contested shots, on-ball pressure defense, doubling the post, we got a little bit of everything from Texas and Butler. To UT’s credit, with Bamba and Osetkowski in the lane, and Roach on the perimeter, you’ve got three quality defenders.

On the other side, some really poor shot selection and Texas got caught up in Butler Ball; slow, methodical, deliberate. Thankfully Andrew Jones’ shot was falling early. His improved shooting form and overall game continues to grow, but I digress. That first half was solid defense and a hot mess.

We mentioned at length all offseason about the importance of a true point guard. The freshman floor leader displayed those attributes the Texas Basketball program has missed since DJ Augustin’s departure. (Avery Bradley, Isaiah Taylor, and Corey Joseph were better in the league, Kabongo was overrated)

Coleman’s nine dimes tonight are the most since Taylor had nine versus Baylor on 3/10/16. He added seven points and three steals, with only one turnover. You’ll win a lot games with this formula.

You have to have a closer in hoops. Coleman took another step toward that tonight. Up next: No. 1 Duke. – JW