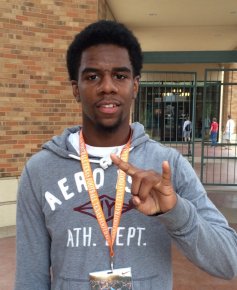 Four new Texas targets to evaluate in this week’s Recruiting Notebook. An East Texan RB, athletic QB, versatile CB, and an under-the-radar pass-catcher in Dallas. All inside the Notebook.

How he fits at Texas: Dunning has strong ankles, is fluid and coordinated, and can pull away from defenders but he doesn’t yet have the lower body power to be a featured back for Texas. He’s a fantastic athlete with good hands who might make an excellent WR or DB but he won’t jump Warren on the wish list at RB. – Ian Boyd

Coach says: Man, Whitehouse was loaded this past year. Dunning is a solid back, not elite by any means but solid. Definitely not a flashy back and not the most explosive guy you will see on tape, but he has the ability to get his shoulders square and get north and south on you and pick up yards. He has some subtle moves that allows him to avoid contact and tacklers. Has enough speed to get to the edge of the defense and is constantly fighting for more yards and even uses his third wheel at times.

How this affects Texas: The story of Vincent Dunning has yet to be written. Dunning is getting an extra year of HS football – this is his 5th year, but he’s only played football for two years. His older brother is a safety committed to Texas A&M (no, he’s not interested in UT), so there’s lots of athletic ability in this family. Texas is in wait-and-see mode with Dunning. He’s a tough kid, who really wants a chance to shine. One of his hobbies; boxing. Texas is slowly recruiting Vincent, he even visited this summer. He also fits the mold of a Charlie Strong tailback. – Justin Wells

How he fits at Texas: Williams is really powerful in his lower body and can turn the corner as a pass rusher, making him an interesting OLB prospect. He’s listed as a WR but he lacks top end speed and would fit better on the inside as an H-back or flex TE. However, he’s already pretty filled out and it’s hard to see him at 240+ even though he’s only a junior. Williams is a big, powerful athlete, who’s eventual fit isn’t totally clear yet but defense may be his best bet. – IB

Coach says: This may be a diamond in a rough here. I’ve gone on record before about how I feel about private school players, but I may step out on a limb on this one. I’m not even going to entertain this kid on offense, you need to let this kid get into a three point stance and get after the passer. Plays VERY fast and can flat out get off the rock. That first step alone will create havoc not only at the HS level, but at the collegiate level as well. Someone is going to throw 30-40 pounds on him and turn him into a go daddy.

How this affects Texas: This kid is a freak. I met Williams at the Dallas NFTC in May and instantly thought,” who the hell is that?” He’s huge. He resembles an NFL-ready WR, as a HS junior. He won’t go unnoticed too long. Oklahoma offered this week, by the way. If he’s not on the Texas radar by December, I’ve totally missed something here. I think TE is his best long-term fit. – JW

How he fits at Texas: Lane can flip his hips amazingly well for a 6-foot-1 DB and is probably one of the three best cornerback prospects in the state. He’s brilliant playing a deep 1/3 and can drive on routes thrown in front of him. Lane is a perfect fit for the Texas defense and perhaps only a smidgeon behind Kris Boyd or Holton Hill as a corner prospect. – IB

Coach says: This kid’s stock blew up a long time ago and if you watch the tape, it is very clear why. Tall, long, rangy and he can flat out cover. He flashes his wheels when he walks down an opposing running back who looked like he had a sure touchdown from the backside. Comfortable playing off or pressed up on receivers, seemed to bait QBs into throwing his way.

How this affects Texas: Lane likes Texas. He just wants Texas to like him back. It’s middle school all over again. Lane has visited Texas once, came away impressed, and wanting to pledge UT. Only problem, Texas didn’t offer. For a guy that grabbed 30+ offers in three months (he’ll be the most over-recruited player, a college coach told me), that doesn’t seem to faze Strong. The problem here isn’t talent, it’s off-the-field stuff. Strong is making a statement here, IMO. Still, if UT changes their mind, you’ll see Lane at DKR next fall. – JW

How he fits at Texas: Ketchum’s current QB mechanics make it clear that his best chance at seeing the field are not as a signal caller. His athleticism shows up best when he’s accelerating or decelerating in the open field, so his attributes may translate best to outside receiver where he could become a terror on the sideline providing he can catch. If not, and if he has the mentality for it, Ketchum might make a very versatile safety. – IB

Coach says: Ketchum is interesting because on the field he is a no-brainer, but off the field is where the issues rest. Though I’ve seen bigger projects at QB, I see him as more of an athlete at this stage. Don’t get it twisted though because he is a damn good one and can GO. You get the ball in his hands and let him go. He could be a fit in the right system at the next level, but that system is going to have to be tailor made to his skill set for sure. If he gets his act together off the field, I think he makes an impact on someone’s roster next year. He’s an ideal safety, long term.

How this affects Texas: Ketchum is the ultimate boom or bust guy. His ability and potential could easily land him on an NFL roster in five years as a strong safety. His head and decision-making could easily land him in trouble or jail in the next five years too. There’s much risk/reward with this one. I think if Texas really wants him, they’ll get him. – JW