The Austin American-Statesman is reporting today that TCU athletic director Chris Del Conte will be hired as the men’s and women’s AD.

Del Conte began at TCU in 2009. Mike Perrin, who currently serves as Texas AD, has held the position since 2015.

AUSTIN, Texas — Chris Del Conte has been named vice president and athletics director at The University of Texas at Austin and will begin that job Monday. Del Conte has served as director of intercollegiate athletics at Texas Christian University since 2009 and is nationally recognized for developing winning programs, upgrading facilities, improving the fan experience and helping student-athletes excel on and off the field.

“Chris has the experience, vision and character that’s needed for Texas to build on the Longhorns’ rich legacy and to continue winning with integrity for years to come,” UT Austin President Gregory L. Fenves said in an email to UT students, fans. 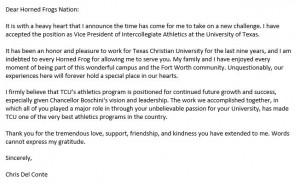